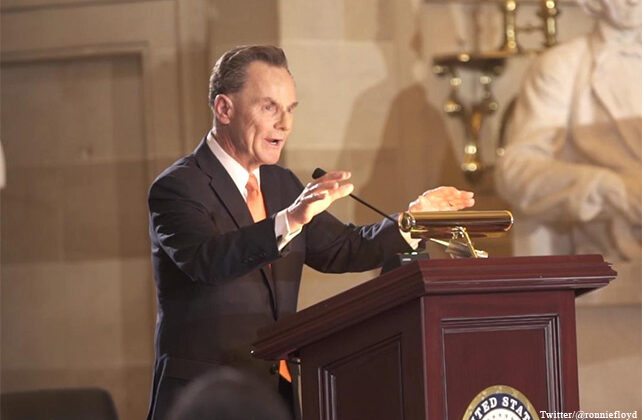 Ronnie Floyd immediately released a statement in response to Bethancourt’s letter and recordings and posted it to his Twitter account. In the statement, Floyd apologized for “any offense that may have resulted from my remarks” in the recorded conversation.

Floyd also encouraged fellow Southern Baptists “to listen to these clips rather than simply accept a description of what the conversations entailed,” adding that the recorded discussions “reflect leaders engaging in a scriptural process of coming together with others who have differing opinions on complicated issues and of discussing those differences honestly with a goal of how to best move forward.”

I knew when the Lord called me to lead the SBC Executive Committee that we were facing extremely difficult times. At that time, the number one issue was how the SBC was dealing with the responses to sexual abuse. I became increasingly aware of the challenges that lay before us as I got further into the role. The Convention was and still is divided over methods of response to response to sexual abuse. However, The SBC is not divided on the priority of caring for abuse survivors and protecting the vulnerable in our churches.

In May 2019, I called a confidential meeting of the Southern Baptist leaders in Atlanta with the express purpose to chart a path for Southern Baptists to appropriately address concerns of sexual abuse across the Convention. This morning audio clips from that meeting were released by Phillip Bethancourt in an attempt to mischaracterize them as an effort to avoid addressing the reality of sex abuse.

I would encourage Southern Baptists to listen to these clips rather than simply accept a description of what the conversations entailed. These discussions reflect leaders engaging in a scriptural process of coming together with others who have differing opinions on complicated issues and of discussing those differences honestly with a goal of how to best move forward.

Following the Care Well Conference, I requested a meeting with Russell Moore and Phillip Bethancourt to better understand how to respond to churches that had questions coming out of the conference. This was the context of the conversation. However, I apologize for any offense that may have resulted from my remarks.

Regardless of how some are attempting to characterize past action and future intent, since last weekend the Executive Committee staff leadership has been in the process of talking with and potentially securing a highly credible outside firm with the intent of conducting an independent third-party review of the accusations recently levied at the SBC Executive Committee.

Lawyer Rachael Denhollander, the former gymnast who accused Larry Nassar of sexual abuse, responded to Ronnie Floyd’s letter on Twitter saying, “This cannot be characterized as anything less than dishonest. I am beyond disappointed that at every opportunity to stand for the truth, Ronnie Floyd has deflected and refused to be honest, causing so much damage to so many. This is not honest.”

Former vice president of Lifeway Christian Resources and abuse survivor Jennifer Lyell posted to her Twitter page asking for Floyd to recuse himself immediately from any influence at the upcoming SBC Annual Meeting. She wrote, “@ronniefloyd’s documented actions & decisions as CEO of the @sbcexeccomm were of material significance to the damage done to me & my legal claim against the EC. It is a massive conflict of interest for him to have any role in establishing an investigation into the @sbcexeccomm…@ronniefloyd, you need to recuse yourself immediately from *any* influence or interference w/proposed messenger action to direct the selection/hiring of an independent, experienced firm to investigate all current & past @sbcexeccomm staff, trustees, & contractor actions re:abuse.”

The 2016’s 2nd vice president of the Southern Baptist Convention’s Malachi O’Brien offered support to Floyd, calling Southern Baptists to pray for the upcoming meeting next week. O’Brien wrote on Twitter; “Dear Southern Baptists… For the last 10 years of my life @ronniefloyd has been a friend, a mentor, & a pastor. No one I have higher respect for. He tirelessly serves SBC pastors & churches Do NOT believe the slander & lies. He is a once in a generation leader. Please pray.”

Lindale, Texas’ First Baptist Church’s senior pastor Tom Buck said in regards to Bethancourt’s released secret recordings of Floyd that, “Without the editorial commentary of @pbethancourt, there’s nothing in the audio that suggests @ronniefloyd or @PastorMikeStone was trying to cover up sexual abuse. It was nothing more than an honest and frank conversation about the process of handling a very difficult situation.” Buck also mentioned in his Twitter feed that he believes “Nothing but pure worldly politics are being played out right before our eyes.”

Rachel’s husband Jacob Denhollander told his followers on Twitter, “ALL of this is coming out after MONTHS and YEARS of private attempts to deal with these issues. Anyone complaining about the public revelation of these issues is either ignorant or being intentionally misleading to deflect from the endemic dishonesty on display.”

On Friday June 11, 2021, the SBC Executive Committee released a statement that was sent in an email to ChurchLeaders.com. The statement said that the “committee is committed to serving Southern Baptists with integrity, excellence, transparency and accountability.”

The Executive Committee, including Ronnie Floyd, have hired Guidepost Solutions to conduct an independent investigation of its processes, specifically regarding the recent accusations made by former president of the Ethics & Religious Liberty Commission Russell Moore claiming the committee mishandled sexual abuse claims.

According to the SBC’s statement, “Guidepost Solutions will review these recent allegations against the SBC Executive Committee of mishandling sexual abuse cases and mistreating sexual abuse victims; the allegations of a pattern of intimidation; and review and enhance training provided to SBC Executive Committee staff and its board of trustees related to these matters, as well as its communications to cooperating churches and congregants in cooperating churches.”

ChurchLeaders.com will be live reporting from this year’s 2021 SBC Annual Meeting in Nashville, TN. Please check back on Tuesday and follow our newsfeed to receive the latest updates from what looks to be an interesting Southern Baptist Convention.