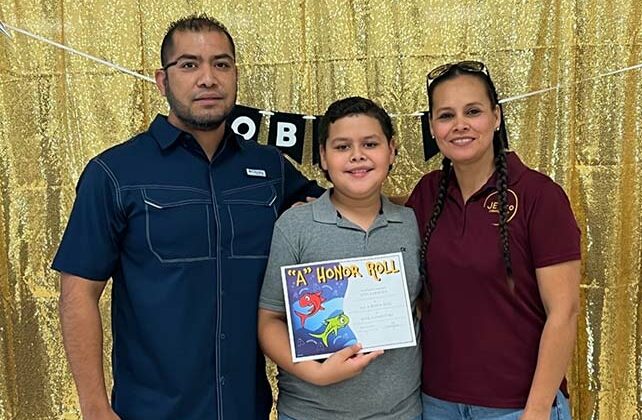 UVALDE, Texas (BP) – Ten minutes. Maybe 12. That’s the time from when Neftali Barboza and his wife, Hilda, left Robb Elementary School yesterday until The Call. Their son, Levi, still had his All A’s Honor Roll certificate and was in the truck with them. The caller was relieved to hear it, because a shooter had just entered the school.

Barboza, pastor of Iglesia Bautista Nueva Jericho, turned the truck around. Approaching the school, he saw police and recognized the helicopters circling overhead as being the same ones he worked on as a mechanic with U.S. Customs and Border Patrol. His friend had called from the funeral home across the street and asked for Barboza’s help in calming the numerous children who had fled there in terror.

“I stayed and helped take care of the kids,” he said. “I let as many parents as I could know their child was safe. We were there an hour or two; I’m not really sure.”

As a parent and local pastor, Barboza has joined others trying to make sense of the shooting that claimed the lives of 19 children and two adults as well as left others in critical condition. Uvalde is a close-knit town full of people who stick together and pray for each other, he told Baptist Press. It’s the place where these kinds of things aren’t supposed to happen.

RELATED: ‘This Is Horrific’—Church Leaders Express Heartbreak Over School Massacre in Texas

“My heart is broken,” he said. “I can only imagine what other families are going through.”

The shooting is the third deadliest on a school campus in the nation’s history, behind 33 killed at Virginia Tech University in 2007 and the 28 deaths at Sandy Hook Elementary in Newtown, Conn., in 2012.

What becomes a list for observers will remain an indelible mark for those close to the scene. Barboza knew many of those families. His son had friends in the classroom – on the same hall as his – where the shooter barricaded himself before a Border Patrol agent ended the carnage.

No members of Barboza’s church were directly harmed in the shooting, though one member has a niece whose daughter was among the wounded. Tommy Larner, director of missions for the Del Rio-Uvalde Baptist Association, said a pastor contacted him yesterday for prayer. A man who had been attending his church off and on lost his granddaughter in the shooting.

“You can’t come up with adjectives to describe such a horrible act,” Larner said. “Please pray that the people here would experience the tender love of our Heavenly Father and for pastors to be able to share that the only hope is through our Lord Jesus Christ.”

RELATED: How To Talk With Kids About Shootings

Larner is a retired International Mission Board missionary, having just returned from an Orlando event honoring IMB emeriti. He and his wife served for 15-and-a-half years in Ecuador, nine years in Mexico and five in Peru.

Though he experienced some “iffy” situations in that time, he said he’s never been this close to such violence.

“My wife and I lost a son at 30 years old very suddenly,” he said. “When you lose a child it’s just overwhelming. I can’t imagine having lost a precious 10-year-old son or daughter in such tragic circumstances.”

Leaders from the Baptist General Convention of Texas and Southern Baptists of Texas Convention have been in contact, Larner said, with state executives Nathan Lorick (SBTC) and David Hardage (BGCT) each expressing their support and prayers.

Tony Gruben, pastor of Baptist Temple Church, is the current president of the local ministerial alliance. The road ahead will be long, as numerous churches in the area and association are directly impacted by the shooting.

“Emotions were pretty raw for families waiting outside the civic center last night, and they’ll continue to be for a while,” he said. “We’re having a prayer gathering tonight where I’ll share out of Psalm 46 and talk about how God is our refuge and strength in times of trouble.”

Last night ministers at the civic center focused on supporting counselors who will have many long days ahead.

An employee of a Baptist camp north of the city lost a daughter, Larner said. Neighbors of a staff member at First Baptist received news their granddaughter was among the dead. Larner feels certain that he and his wife shared the table with a young victim at a wedding ceremony in December.

Accepting the weight of the tragedy will take time, said a trauma expert.

“The initial reaction is denial,” said Evan Owens, executive director for Reboot Recovery, a faith-based trauma recovery program. “It’s not out of ignorance or naiveté, but because the things we just experienced aren’t congruent to the future. Grief, in general, changes our future without our permission.

“To feel any of it is to feel all of it at once. That’s overwhelming.”

Owens said it’s important for churches to be safe spaces for communication in these times.

“We need to be a place where you can talk about this stuff. Don’t sugarcoat it. Trauma is our intersection with the brokenness of the world.”

The shooter attended Uvalde High, where a ceremony was to be held yesterday for Barboza’s oldest son, Eli, signing his letter of intent to play linebacker at Oklahoma Panhandle State University in the fall. That ceremony was why the couple checked Levi out of school.

Eli learned about the shooting and joined his family at the funeral home, staying outside out of concern for friends whose siblings had yet to be located.

“He was a little shaken that his little brother was so close to it,” Barboza said, adding that his younger son is still processing it all. “He knew several of the kids who were shot and killed.”

But it has begun to sink in that May 24, 2022, was a before/after day. Driving back by the school, the fourth-grader felt it.

He started to cry.