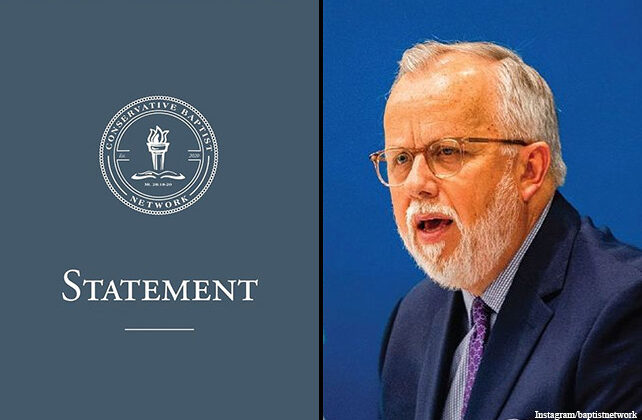 Who Is the Conservative Baptist Network?

According to the purpose statement located on its website, the CBN is a “partnership of Southern Baptists where all generations are encouraged, equipped, and empowered to bring positive, biblical solutions that strengthen the SBC in an effort to fulfill the Great Commission and influence culture.” The CBN also states it is committed to seeing the SBC function biblically, efficiently, and strategically. The network says it is not a denomination, competitor, or platform created to “air grievances, but are Southern Baptists who use this avenue called the CBN to voluntarily partner together with like-minded pastors, churches, organizations, and individuals to influence the SBC to fulfill the Great Commission.”

The CBN’s steering committee is comprised of numerous leaders, including:

The full list of the CBN steering committee can be found here.

CBN’s statement said it waited nearly a month to respond after Litton’s sermon plagiarizing was first reported in the hope that Litton would “acknowledge his error and repent.” The statement said this has not happened.

“Scripture says acquitting the guilty (Prov. 17:15) and calling evil ‘good’ (Isaiah 5:20) are wrong,” the CBN statement says. “Deceitful behavior on the part of a pastor is doubly egregious as those holding this office are called to be ‘able to teach,’ and to ‘study to show yourself approved.’ Plagiarism is a violation of the 8th [You shall not steal] and 9th Commandments [You shall not give false testimony against your neighbor], and Scripture warns that men leading Christ’s local churches will be judged with even greater strictness (James 3:1).”

The statement says evidence of at least six videos by named sources show Litton displaying serial plagiarism within his sermons. Because of that evidence and what the CBN said was a lack of acknowledgement for wrongdoing and repentance on Litton’s part, the steering committee is calling on the “leaders of the SBC to address this matter promptly and biblically.”

“For the sake of the gospel,” the CBN said, “it is best for President Litton to step down from office and focus on his personal spiritual development with his local church. The testimony of Southern Baptists and of the Gospel is at stake.”

You can read the CBN’s full statement here.

Litton, along with his wife Kathy, have been accused of plagiarizing a marriage sermon Tim Keller gave in 1991 which they preached together in 2012. The video released by Capstone Report plays sections from both Keller’s and Litton’s sermons and reveals the Litton’s “liberally borrowing” and at times reciting word-for-word Keller’s 1991 message.

Litton addressed the accusations in a written statement and apologized for not giving J.D. Greear credit for the sermons he had permission to use, and he answered a reporter’s questions about where the plagiarism charges came from. During an interview with WKRG earlier this month, Litton said the sources are “unnamed” and “that’s part of the problem.” Litton added that because unnamed sources are presenting the charges, that should “make everybody take a pause.”

After the interview was released, Justin Peters from “Justin Peters Ministries” posted a comment saying, “Unnamed sources? My name is Justin Peters. Let’s add to my name the names of Gabriel Hughes, Jeff Maples, Jordan Hall, Tom Buck, Tom Ascol, Josh Buice, Phil Johnson, and literally dozens upon dozens of others who have been talking about this (along with their names) for at least 2 weeks now. There, fixed it.”