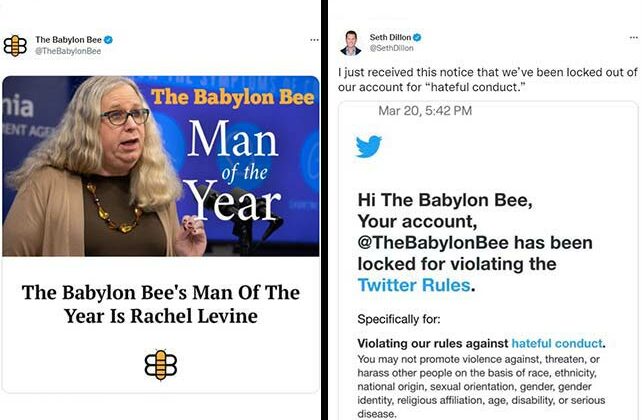 The widely popular Christian satire news site The Babylon Bee was told on Sunday, March 20, 2022, that their Twitter account has been locked because it violated the social media giant’s rules against “hateful conduct.”

The Babylon Bee’s CEO Seth Dillon posted the news on his personal Twitter page with a screengrab of Twitter’s allegations, saying, “I just received this notice that we’ve been locked out of our account for ‘hateful conduct.’”

The humor site posted an image last Wednesday, March 16, 2022 of U.S. Assistant Secretary for Health Dr. Rachel Levine with the title “The Babylon Bee’s Man of the Year Is Rachel Levine,” with a link back to their article, which has since been removed. The tweet has received over 13,500 likes and almost 2,500 retweets.

The Babylon Bee’s post was made a few days after USA Today’s announcement that Levine was named one of their “Women of the Year.”