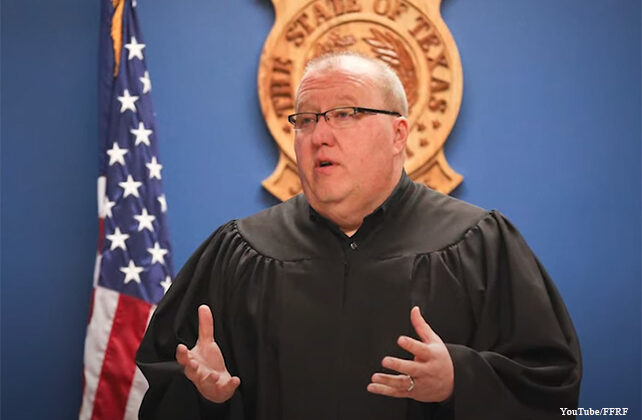 The ruling came after the atheist organization Freedom From Religion Foundation (FFRF) sued Mack for his courtroom allowance of the chaplains’ prayers, saying they were unconstitutional.

Attorney John Roe regularly argues cases in Mack’s courtroom and is a member of the FFRF. He was also listed as a plaintiff on the suit. In a statement by the FFRF in December 2020, it acknowledged that Roe objects to any government official “dictating” how and when he prays. Roe recalled a time he was representing a client in Mack’s courtroom and the clerk of courts “demanded” he and the litigant enter the courtroom for prayer. Feeling compelled to oblige, Roe said he didn’t want to “jeopardize his business,” saying he was afraid not participating in the courtroom prayer would lead to Mack being biased against him and his client(s).

Mack explained to the court that the ceremony’s purpose was to “solemnize the proceedings in his courtroom” and “set the tone for everybody that’s in the courtroom…by speaking to the fact that this is a court of law and the rule of law will be applied and respected.” Mack also told the court that “a moment of silence or prayer often helps people center themselves emotionally in what can be an emotionally charged atmosphere.”

Also read: For 70 Years the National Day of Prayer Was Held at the U.S. Capitol Building. Not This Year

Mack who was a former licensed minister and almost majored in theology at Jackson College of Ministries, has been targeted for his courtroom-led prayer since March 2017 when FFRF and Roe first attempted to remove the practice from his courtroom.

Hoyt’s conclusion reads: “The Court is of the view that the defendant violates the Establishment Clause when, before a captured audience of litigants and their counsel, he presents himself as theopneustically-inspired, enabling him to advance, through the Chaplaincy Program, God’s ‘larger purpose.’ Such a magnanimous goal flies in the face of historical tradition, and makes a mockery of both, religion and law. Accordingly, the plaintiffs are entitled to a summary judgment. Therefore, the Court declares that the defendant’s practice of opening regular court proceedings with religious prayers is unconstitutional. Should the defendant violate this Court’s declaratory decree, an injunction will issue.”

Hoyt’s decision agreed that Mack’s courtroom prayers were “unconstitutionally coercive.” He felt the prayers promoted religion because the volunteer chaplains directed their prayers to the courtroom filled with members who are pending arrest or facing other ordered penalties. FFRF stated that Mack’s prayer practices are nothing like legislative prayer because that is directed to the judge, not the audience in the courtroom

FFRF co-president Annie Laurie Gaylor celebrated the victory, saying, “A courtroom is not a church, and a judge’s bench is not a pulpit. Today’s ruling is a victory for the constitutional rights of all Americans and for equal justice under the law.”

“In a time where the wall of separation between state and church is continually chipped away,” FFRF legal director Rebecca Markert said, “this decision is welcomed for its straightforward and accurate interpretation of the Establishment Clause, noting the prayer practice ‘flies in the face’ of our traditions.”

According to the FFRF, plaintiffs will seek to recover attorney fees and courtroom costs against the state following Hoyt’s ruling.