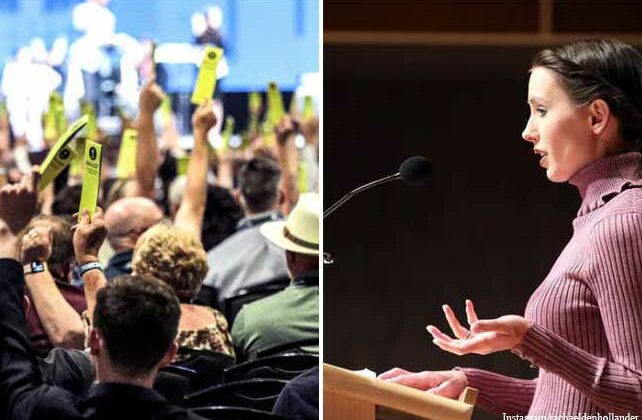 Devoted Christ-follower, attorney, former gymnast, and sexual-abuse survivor Rachael Denhollander posted a series of tweets detailing her view of what it took to get the Southern Baptist Convention (SBC) to look into its Executive Committee’s alleged mishandling of sexual abuse claims from victims within their collection of churches.

Denhollander, who led the way in speaking out against her abuser, USA gymnastics team doctor Larry Nassar, told her followers that Christa Brown “began pioneering the movement to shine a light in the SBC” well over a decade ago. Denhollander’s tweet was posted just a few hours after the SBC messengers nearly unanimously voted for an independent task force to investigate the SBC’s Executive Committee for its alleged mishandling of sexual abuse claims.

Denhollander praised sexual abuse survivor Christa Brown for relentlessly telling the truth over and over in spite of leaders calling her “demonic” and “satanic” and comparing her behavior to that of an abuser. Denhollander said Brown created a “safe place” for the other survivors who came forward and became a guide to help weather the storm that embroiled those who “dared to speak up.”

Brown started a website that tracked SBC abusers and those who tried to cover up the abuse. Denhollander said Brown’s “pioneering” for abuse survivors resulted in “over the course of many years, others began to speak up.”

Denhollander and the Caring Well Curriculum

When SBC leaders reached out for Denhollander’s help in developing ‘The Caring Well‘ curriculum, a unified call to action for churches to confront the abuse crisis, she said she suggested a couple critical steps for immediate action. Step one, she said, was “an audit of the convention to gather data related to abuse and mishandling, and to identify trends and patterns to inform meaningful steps forward.” The second step was “an investigation into actions of elected, appointed or paid staff or leaders of the Convention, related to abuse & mishandling of abuse.”

Thinking it would take years for her suggestions to see the light of day, Denhollander said that although the SBC Executive Committee “stonewalled and refused all offers of help” abuse survivors continued to speak up.

She shared that SBC messengers Grant Gaines and Todd Benkert reached out for help to draft their now-passed motions to “clearly articulate their goals without running afoul of SBC parliamentary rules.”

“Sound theology and SBC polity is not, and never has been, in opposition to meaningful steps to reform. All that is needed are leaders willing to ask those who can help ‘how do we get this done?’ and then fighting for it,” Denhollander said.

Change is slow but it’s not wasted, she said, and added she is grateful for what she witnessed happen at the SBC Annual Meeting in Nashville this week. “The work is not done,” she said, “but we’ll do it, together.”

Today, SBC messengers voted to conduct a convention-wide audit of abuse and mishandling, and also to investigate the actions of convention leaders related to sexual abuse. It’s a critical step, but what what I want you to really see, is what it took to get here:

Well over a decade ago, @ChristaBrown777 began pioneering the movement to shine a light in the SBC. At great personal cost, she told the truth over, and over, and over. Leaders called her demonic, satanic, as bad as an abuser, but still she fought for the truth and survivors.

She wrote a book and began a website tracking SBC abusers and coverup. When other survivors like @ThigpenTiffany came forward, Christa was the safe place, and the one to guide survivors through the storm that was coming when they dared to speak up.

Together, survivors like Tiffany, @Dave_Pittman and others spoke up. A very few seasoned advocates, like Christa and @BozT fought for them and spoke the truth. @DianeLangberg pioneered understanding and responding to trauma in the church. The response was often vitriolic.

Over the course of many years others began to speak up. When @megannlively exposed Paige Patterson’s coverup of her abuse, Jenn Lyell began a quiet petition to have him removed. @SusanCodone educated and pushed for change. Retaliation against them was swift and strong.

When a few leaders reached out to me to work on the Caring Well curriculum and other abuse related issues in the SBC, I expected that the trickle-down work of educating would take decades, but suggested two critical steps that could be taken immediately:

1. An audit of the convention to gather data related to abuse & mishandling, & to identify trends & patterns to inform meaningful steps forward.

2. An investigation into actions of elected, appointed or paid staff or leaders of the Convention, related to abuse & mishandling of abuse.

I expected it would take years to see this done, if at all. But survivors continued to speak up. A few brave leaders refused to silence them or the Caring Well team, even when they knew ahead of time the controversy that would ensue if we spoke freely on stage.

However, the executive committee leadership stonewalled and refused all offers of help. They defamed Jen Lyell and refused to back down. Hours upon hours upon hours of work by myself and many others was consumed, all with no expectation of seeing tangible fruit.

When @toddbenkert & @DGrantGaines reached out regarding their motions, I shared with them the steps I’d been advocating for & helped draft the motions to clearly articulate their goals without running afoul of SBC parliamentary rules.

The best I hoped for was that it would draw the lines clearly, and help clear the path for passage in a few years. But their commitment, and the commitment of so many survivors and leaders, came together to create the first steps to meaningful reform in the SBC.

What I hope we all take from this is the following: Sound theology and SBC polity is not and never has been, in opposition to meaningful steps to reform. All that is needed are leaders willing to ask those who can help “how do we get this done?” and then fighting for it.

– Change is slow. It can take decades of invested time and the work of so many before tangible fruit is seen. But that investment of love and faithfulness is not wasted.

– Fighting for truth, justice and reform is the work of a community. Caring well for those who have been deeply wounded requires the participation of everyone. Messengers had to listen, pay attention, care, and take a stand. And they overwhelmingly did.

This is the work we have been called to: Do justice. Love mercy. Walk humbly before God. I am so grateful we saw a tangible example of this in Nashville. The work is not done; but we’ll do it, together.

The SBC Executive Committee Responds to the Investigation

“We will work to expeditiously implement today’s motion,” the statement read, and reassured the SBC messengers the committee’s intention has always been to be forthright and transparent in this process. It also mentioned that the Executive Committee had voted in its meeting Monday to have Guidepost conduct an investigation.

The committee said that it is “confident” that the investigation will result in the “ultimate blessing of removing all doubt in the minds of our community of Southern Baptists, allowing us to chart a more confident future together.”

Agreeing that this cause is “important,” the committee thanked the messengers who had invested “so much righteous energy” into it.