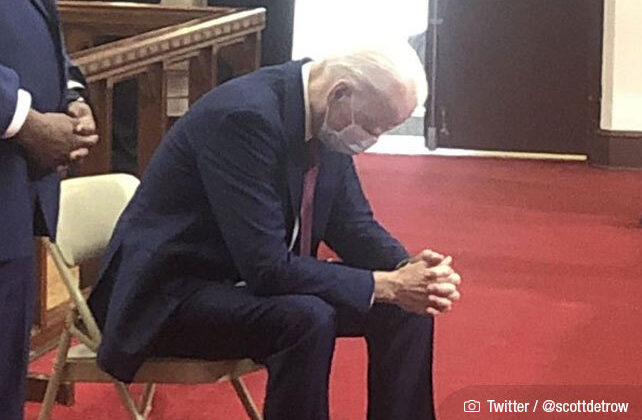 In the National Day of Prayer Proclamation, Biden said, “Today, we remember and celebrate the role that the healing balm of prayer can play in our lives and in the life of our nation.” He mentioned Americans’ Constitutional First Amendment rights to “free speech and religious liberty, including the right of all Americans to pray,” while expressing those freedoms has created us to be a “nation of remarkable religious vitality and diversity across the generations.”

He spoke of the “deadly pandemic,” “racial injustice,” and “climate change.” He even quoted the late Congressman John Lewis and said, “Nothing can stop the power of a committed and determined people to make a difference in our society. Why? Because human beings are the most dynamic link to the divine on this planet.”

“Let us find in our prayers, however they are delivered,” he encouraged, “the determination to overcome adversity, rise above our differences, and come together as one nation to meet this moment in history.”

Although President Biden is hailed as a devout Catholic, he failed to mention the one to whom we pray. He did not mention “God” once.

At the National Prayer Breakfast in February 2021, the name “God” was glaringly absent in Biden’s delivered remarks. The obligatory “May God bless you all” at the end of his address was present, but it was the only mention of God. After citing hunger and poverty, the pandemic’s ravaging, political strife, and more as critical issues, rather than point to God as the one who could deliver us, Biden pointed to another source for our hope.

“Where do we turn?” Biden asked. And he answered, “Faith…for me in the darkest moments, faith provides hope and solace. It provides clarity and purpose as well. It shows the way forward.”

Now President Biden has had two opportunities to address people of prayer, and while he has encouraged prayer–and faith–he has failed to mention the God whom we pray to and place our faith in. Watch President Biden’s remarks at the February 4, 2021, prayer breakfast below.

President Trump, Obama, Bush, and Others Mentioned God in Proclamations

In 2020, President Donald Trump mentioned “God” 11 times in his National Day of Prayer proclamation and over 17 times in his prior three before that. Trump said that America is “one nation under God,” and that “prayer guides and empowers our nation and that all things are possible with God.”

President Barack Obama proclaimed in 2016, “I join all people of faith in asking for God’s continued guidance, mercy, and protection as we seek a more just world.” Obama didn’t shy away from using “God” in his proclamations of his eight-year tenure, using it over 14 times in National Day of Prayer gatherings.

In President George W. Bush‘s 2008 proclamation, he said, “America trusts in the abiding power of prayer and asks for the wisdom to discern God’s will in times of joy and of trial.” Bush mentioned ‘God’ a total of 42 times over the eight National Day of Prayer events he attended. Probably the most memorable mention was his 2002 proclamation less than a year after the events of 911 took place.

In that proclamation, Bush said, “Especially since September 11, millions of Americans have been led to prayer. They have prayed for comfort in a time of grief, for understanding in a time of anger, and for protection in a time of uncertainty. We have all seen God’s great faithfulness to our country. America’s enemies sought to weaken and destroy us through acts of terror. None of us would ever wish on anyone what happened on September 11th. Yet tragedy and sorrow none of us would choose have brought forth wisdom, courage, and generosity. In the face of terrorist attacks, prayer provided Americans with hope and strength for the journey ahead.”

During President Ronald Regan’s 1987 proclamation, he said we needed to turn our hearts to God. Reagan said, “America has lived through many a cold, dark night when the cupped hands of prayer were our only shield against the extinction of courage. Though that flame has flickered from time to time, it burns brightest when we are willing, as we ought to be now, to turn our faces and our hearts to God not only at moments of personal danger and civil strife, but in the full flower of the liberty, peace, and abundance that he has showered upon us.”

In 1952, the year that President Harry S. Truman signed into law requiring United States presidents to issue a proclamation on the National Day of Prayer, President Truman said, “WHEREAS the Congress, by a joint resolution approved on April 17, 1952 (66 Stat. 64), has provided that the President “shall set aside and proclaim a suitable day each year, other than a Sunday, as a National Day of Prayer, on which the people of the United States may turn to God in prayer and meditation.”

Franklin Graham, Samaritan’s Purse CEO and president and son of the late great Billy Graham, criticized President Biden for leaving “God” out of his National Day of Prayer proclamation. Graham said on his Facebook page, “I was deeply saddened to read that President Biden is the first president to omit the word “God” in his proclamation. That speaks volumes, doesn’t it? It is hard to believe we have come this far. Omitting God is a dangerous thing. He is who we as individuals and as a nation need to call on for help. He created us and made salvation possible for us through faith in His Son, Jesus Christ. Prayers to anyone or anything else are to no avail.” Graham later appeared on Fox News Primetime to discuss President Biden’s ‘Godless’ proclamation.