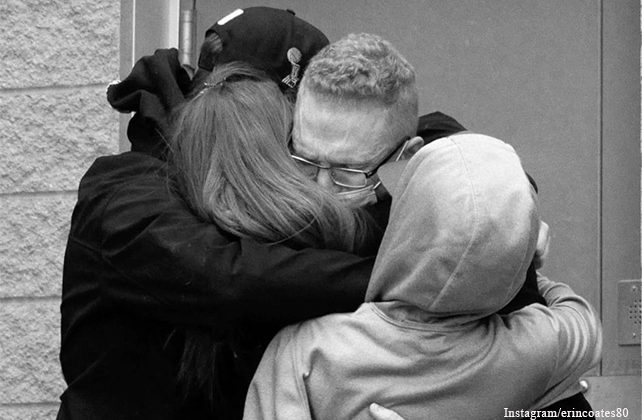 Update (3-23-2021) After spending almost five weeks behind the bars of the Edmonton Remand Centre for violating public health mandates, Pastor James Coates was released yesterday (March 22, 2021). Coates was jailed because he preached at his GraceLife Church‘s worship gatherings and refused to place capacity and social distancing restrictions upon the congregants.

Appearing virtually before Stony Plain court’s Provincial Judge Jeffrey Champion while dressed in an orange and black jumpsuit, Pastor Coates was fined $1,500 and received a stern reprimand from the judge: “Your decision could have been of danger to the health and safety of those in the community.”

Pastor Coates’ lawyers proposed a lesser fine. But according to the Edmonton Journal, Judge Champion voiced his concern with the message the court could be sending to others who might be looking to disobey public health orders if a lesser fine would have been accepted.

The husband to wife Erin and father to their two sons told the court on Monday that he was not making a statement by remaining in jail despite having the option to be freed earlier if he would have chosen to adhere to the government’s COVID-19 health mandates.

His wife Erin shared recently in an interview, “I do want to make it clear, he’s not in jail because he didn’t obey the restrictions. He’s in jail because he obeyed the Lord Jesus Christ and His headship over the church and did not restrict the gathering to anybody.”

Repeating what the Coates family and their representation have been saying since the pastor was removed from the community and placed behind bars, James Coates told the court, “I am not a political revolutionary. I am simply here in obedience with Jesus Christ; it is this obedience that put me at odds with the law.”

The Edmonton Journal reported that Pastor Coates will not be under any court-ordered conditions following his release on Monday.

Pastor Coates will appear in court on May 3, 2021 to fight a ticket he was issued in December for exceeding the 15 percent capacity rules currently set in place because of COVID-19 public health orders.

Update (3-19-2021) Representing GraceLife Church‘s Pastor James Coates, the Justice Centre for Constitutional Freedoms (JCCF) released a statement on Wednesday March 17, 2021 that said they expected the release of Pastor Coates this week. This news came after the JCCF said they had reached an agreement with the Crown to withdraw one of the charges for violating COVID-19 restriction orders that the pastor faces.

The hopes of GraceLife Church’s pastor being back in the pulpit this Sunday were crushed on Thursday after the court said, “Contrary to reports that have been circulated by parties involved in the case, there will be no court proceedings involving James Coates on March 19, 2021.”

The court said Pastor Coates’ case is planned to be heard on Monday, which will hopefully lead to his release until the May 3, 2021 trial date but will keep in jail for at least another weekend.

Update (3-11-2021) The Edmonton Journal reported yesterday that GraceLife Church has been charged for continuing to ignore government mandated health orders relating to the COVID-19 virus.

In a news release, Police revealed GraceLife Church’s legal counsel had been served on March 4, 2021 with a summons to appear in Stony Plain Provincial Court on May 5, 2021.

GraceLife Church has been charged because they did not adhere to the 15% maximum allowed capacity for indoor gatherings. The charges were specifically for worship gatherings they help on February 21, 2021 and February 28, 2021. Two worship services that took place without their Pastor James Coates, who remains in jail for disobeying government mandated COVID-19 orders.

The charges do not include GraceLife Church’s gathering they held this past Sunday March 7, 2021.

Associate Pastor Jacob Spenst, who ran the service Sunday in Coates’ absence, said the jailed pastor was joining them via phone but Coates didn’t speak.

This past Sunday marked the third straight worship service Pastor Coates has missed due to being locked up for disregarding pandemic-related health orders, and he will remain in the correction facility until his May trial. Sunday’s indoor service marked the sixth time GraceLife Church violated their closure order for not adhering to capacity restrictions and ignoring social distancing mandates.

Authorities were on site during Sunday’s worship service that had congregants singing without masks but Royal Canadian Mounted Police’s Cpl. Curtis Peters said he was unaware of any needed enforcement that resulted from Sunday’s service.

A Canadian pastor has spent the last two weeks in jail for ignoring pandemic-related health orders. Parkland County’s GraceLife Church’s Pastor James Coates turned himself over to the authorities after holding an in-person worship service on February 14, 2021, despite a closure order for violating COVID-19 health orders.

A ruling on Friday from Alberta Court of Queen’s Bench Justice Peter Michalyshyn will keep him in jail until his May 3, 2021 trial which is scheduled to run through May 5, 2021.

Justice Peter Michalyshyn dismissed Pastor Coates’ appeal and said that the pastor remained unrepentant and plans to continue violating public health orders. “The law that Mr. Coates clearly intends not to be bound by remains valid and enforceable against him.” The justice continued to say, ” Mr. Coates’ strongly held religious beliefs and convictions do not overcome those valid and enforceable laws.”

Justice Michalyshyn said Pastor Coates “drives home even more clearly and personally the depth of his conviction not be bound by the law.” The justice explained that Coates’ clear intent is to not adhere to public health orders because Coates said he could not abide by the conditions of his release if he was granted bail.

Coates’ lawyer John Carplay said, “Pastor Coates is a peaceful Christian minister. He should never have been required to violate his conscience and effectively stop pastoring his church as a condition to be released. Charter freedoms do not disappear because the government declares regular church services to be outlawed while allowing hundreds of people to fill their local Walmarts.”

Although GraceLife Church’s pastor is in jail, the church has continued holding weekend services despite Alberta Health Services’ close watch for violations. It was reported by authorities that the indoor worship services are beyond ordered capacity, yet it is unknown if any further fines have been issued.

People gathered outside of the courthouse on Thursday with banners reading #freejamescoates.

Similar to California’s Grace Community Church’s Pastor John MacArthur, Pastor Coates addressed the area’s COVID-19 restrictions during sermons telling his congregants that “governments exist as instruments of God and there should be unfettered freedom of worship.”