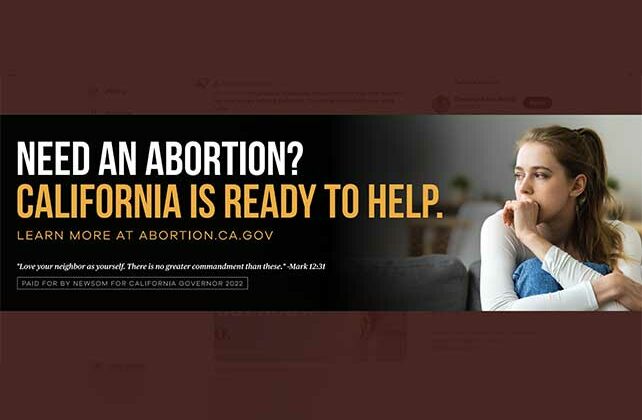 Last Thursday (Sept 15), California Governor Gavin Newsom announced on Twitter that he was launching pro-abortion billboards in seven of the most anti-abortion states throughout the country. The billboards are part of Newsom’s re-election campaign for governor of California.

The billboards are aimed at state abortion restrictions and urge women who are seeking an abortion to travel to California, where abortion laws are among the most permissive.

“NEW: Just launched billboards in 7 of the most restrictive anti-abortion states that explain how women can access care—no matter where they live,” Newsom posted. “To any woman seeking an abortion in these anti-freedom states: CA will defend your right to make decisions about your own health.”

Texas, Indiana, Mississippi, Ohio, South Carolina, South Dakota, and Oklahoma are the seven states targeted by Newsom, who tagged each state’s governor in a post featuring photos of the billboards.