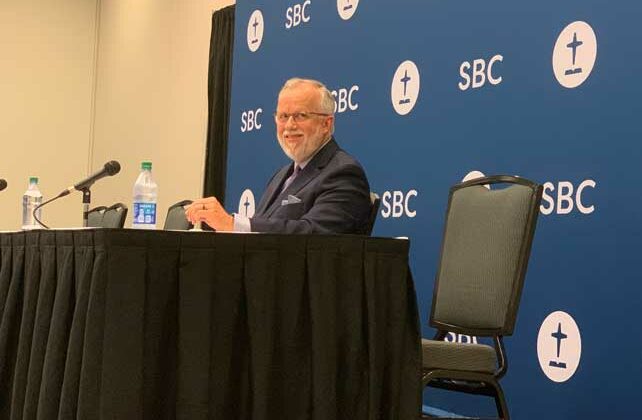 Pastor Ed Litton edged out Pastor Mike Stone by 556 votes in a run-off to become the new President of the Southern Baptist Convention (SBC) on Tuesday, June 15, 2021. The closely watched election had over 13,000 ‘messengers’ (registered representatives from a Southern Baptist Church) who voted at this year’s SBC’s annual meeting, a record-setting attendance over the last 20 years. The annual meeting rarely sees over 10,000 messengers; it has been reported that over 15,000 messengers are at the Nashville location this year.

When asked if he was surprised that he won the election, Litton told RNS’ Bob Smietana, “I want to do whatever I can to help us pull this together. I’m not Superman. I have no magic. But I know this person and his name is Jesus…and they know him, too.” Litton said God gave his family peace over the last couple of weeks and said they have been trusting His will.

Who Is Ed Litton?

Ed Litton has been the senior pastor of Redemption Church in Saraland, Alabama, for the last 26 years. Litton had been married to his wife Tammy for 25 years when she was tragically killed in a car accident in 2007. The couple shared three children. Litton remarried Kathy Ferguson, whose husband was also killed in a car accident in 2002. Rick Ferguson was the pastor Riverside Baptist Church in Colorado.

Immediately following his win, SBC’s president-elect met with reporters and answered questions. Litton shared his testimony and thanked the Great Commission Baptists for trusting him as their new president. He shared that when he was a young boy, seeing the miracle of his father coming to the saving knowledge of Jesus was when he knew “there is nothing that God cannot do.”

Litton said he and his wife have felt loved by the SBC messengers and added to the reporters in the room: “This is a family, and sometimes families argue in a way that neighbors get to see it. And that’s kind of what you’ve been witnessing. The reality is, we will leave this place focused [in] I believe a better direction for the future. Part of what I feel God has called me to do in this run for this office is to help us remember again why we’re a family and what the focus and objective of our family is, which is to get the Good News of the Gospel of Jesus that so transformed my family’s life and personally transformed my life to as many people as can hear it.”

The SBC churches cooperate for the purpose of spreading the gospel, Litton said. “There are 4.5 billion people on this planet that we believe have not sufficiently heard the Good News of Jesus Christ, and so we feel like it is our mission to get it to them. That is one of the things that we focus on, and it’s one of the things we’ve got to keep focusing on. Not our division. Not our differences.”

“My goal is to build bridges and not walls,” Litton said, “to help people connect, talk through things, have honest, open discussions, not shut down those conversations. For all of us to again return to the roots of what God called us to do.”

“What’s very clear in Jesus’ teaching is what he told us we have in the ‘Great Commission,’ that’s what our name comes from.” Litton said the commission is “inseparably linked to the ‘Great Commandment’ — to love God with all your heart, soul, and mind and love your neighbor as yourself.” Demonstrating God’s love looks like “caring when people in my community suffer injustice,” and showing them we love them, Litton said.

“Great Commission Baptists want to be on the frontline of leading people to know a God Who loves them and then by demonstrating the love that’s changed our hearts.”

When asked by Houston Chronicle’s Robert Downen about how Litton intends to handle the sexual abuse allegations embroiling the Executive Committee of the SBC, Litton said, “I think there needs to be an independent investigation. I think we need to look at it throughly and we need to report back in a timely way to the people at the convention.” Litton also encouraged being pastoral in how the SBC handles victims. “How we hear them, empathize, and sympathize with them — we want to bring all this out and expose it to the light,” Litton said. He emphasized that the SBC needs to “work hard” to make all of SBC churches “safe places.”

Does Litton’s Win Predict the End of SBC’s CRT Panic?

When asked by another reporter whether his election would signal the “end of the great CRT panic in the Southern Baptist Convention?” referring to Critical Race Theory, Litton said, “That’s a prediction I can’t make.”

“CRT is a reality in our culture,” Litton said, “and I think people are afraid. I don’t think they need to be afraid within the SBC. It is not taught. It is not believed among our seminaries. No one is endorsing it.” But because it is a reality in our culture, Litton said, “We need to understand it. We need to seek to help find justice….We have a higher tool [that] is the Gospel. The Gospel is the tool that we look at to say that we seek justice, and we are under command to seek justice.” Litton reiterated that he can’t predict if the ‘CRT Panic’ will end and hopes the SBC can have honest discussions that don’t turn into allegations. “Hurt and pain takes intentionality,” he said. “It takes people spending time listening and doing what we can to try to heal wounds, and these are old wounds.”

Discussing how he will approach the divisions about race that exist within the SBC, Litton said, “The only approach I want to be a part of is a Gospel-centered approach. In other words, what’s my motivation for doing it? It’s not to be hip or cool. It’s not to even catch up with the times. My goal is to say, ‘Jesus how would you have me treat my neighbor?’ ”

Ordaining Women in the SBC?

Mike Stone’s supporters were vocal over their concern about a marriage sermon series Litton had previously co-led with his wife lead. Litton responded, “I’m a complementarian. I believe that the pastor/elder of the church has to be male, the primary teaching pastor of the church. But I also believe in the autonomy of the local church. The truth is, the Baptist Faith and Message doesn’t speak to my wife with me in a series on marriage, or a series talking about family. I don’t know about you, but I don’t contain all the wisdom in the world. I believe the Word of God does. But my wife is an apt teacher and she helps me communicate to our people. She also provides a voice that our people need to hear. I felt absolutely free within my convictional status, the Baptist Faith and Message, and the Word of God to invite my wife to come up. She is under my authority as her pastor. We did that together and I am very proud of her.”

A follow-up question asked whether Litton felt churches that ordained women as pastors could join the SBC in the near future. “I think that’s something we are going to have to work out,” he said. “What we need to do is hear each other out…’How to do you define that role that you ordained that person to?’ ” Litton went on to say the Baptist Faith and Message doesn’t address ordination. “The best thing for us to do is not make it a national issue of it, but let that association work it out. The Baptist Faith and Message does not address ordination. We are going to keep it within those boundaries as much as we can.”

When asked if he is in favor of editing the Baptist Faith and Message to provide better clarification regarding women leadership within SBC churches, Litton said, “There are calls for that, but I think it’s good where it’s at. I think there needs to be a wideness to this. Complementarism doesn’t need to be narrowed; it needs to be as wide as it is in the Baptist Faith and Message. And I am good with that.”

Fellow nominee Pastor Mike Stone sent out a congratulations on his Twitter page: “Thank you to all those who supported me in this effort. Our prayers and congratulations are to @EdLitton.”

Beth Moore, who no longer identities as a Southern Baptist tweeted: “@EdLitton I thank God with all my heart.”

Southern Baptist Theological Seminary’s President and fellow nominee Albert Mohler said: “The Southern Baptist Convention has a new president, @EdLitton, who now fully deserves our prayer and encouragement. If I can ever help, I am a phone call away. #SBC2021 #SBC21”

Pastor Randy Adams, who was another nominee, tweeted: “We gave it our best shot, all the way from the Northwest! Thank you everybody. I do believe our message of #Transparency #Accountability #Participation #Partnership have made a lasting impact in #SBC21”

Former ERLC Vice President and Pastor Phillip Bethancourt offered his congratulations and hope: “Congrats to @EdLitton who was just elected SBC president! There are bright days ahead as we unify around our gospel mission! #SBC21“

President of Southeastern Baptist Theological Seminary, Daniel Akin posted on Twitter: “Congratulations @EdLitton on your election as president of @GreatComBaptist! Thankful for you. We will be praying for you my brother as you lead us.

Pastor Dwight McKissic posted: “Repeatedly being asked, am I going to remain in the SBC. Integrity demands that I do so. Resolution 9 was/is untouched & Ed Litton, a man who has a good track record & right heart on race, was elected president. Therefore, I will remain. SBC is in good hands with Litton.”

Each candidate is officially announced by a Southern Baptist messenger who briefly gives a nomination speech as to why they’d vote for their candidate. Former SBC president Fred Luter gave Ed Litton’s nomination and speech, in which he said:

Friends, the SBC has reached a tipping point: our numbers are down, matched only by a decline in trust toward one another. What we need is neither heated rhetoric on one hand or unity-at-all costs on the other hand. We need strong-yet-humble and bold-yet-kind, leadership…Friends, we need a uniter, and Ed is uniquely that. In a time when conservative Southern Baptist African American leaders are questioning their connection to the convention, Ed has uniquely shown his commitment to racial reconciliation. Ed will also lead us to partner with our mission agencies to see a greater focus on the great commission—not another fight, but greater mission! Ed can uniquely do that! Ed is a committed, soul-winning, missions-supporting, inerrantist who believes the Baptist Faith and Message 2000 is our standard for cooperation. And so do I.

In the face of some very difficult but necessary conversations in our SBC family about abuse, Ed Litton brings a compassionate and shepherding heart. Messengers, we need a pastor who understands what it is like to lead a church. We need a pastor who has love for God and for people…Adrian Rogers said that during the Conservative Resurgence those who believed the Bible to be the inerrant Word of God were on the battlefield, shoulder to shoulder. We won that battle, but then retreated to the barracks. Now we are no longer shoulder to shoulder, but face to face. And since we are so used to fighting, we are no longer fighting an enemy on the battlefield; we are now fighting our brother in the barracks. Southern Baptists, it is time to get out of the barracks.

With less than 600 votes separating Litton and Stone, it is possible former ELRC leaders Dr. Russell Moore’s and Phillip Bethancourt’s leaked letters and audio recordings had some influence in the election.

The recordings and letters raised concerns regarding Mike Stone’s character and whether or not he was fit to lead as president of the SBC.