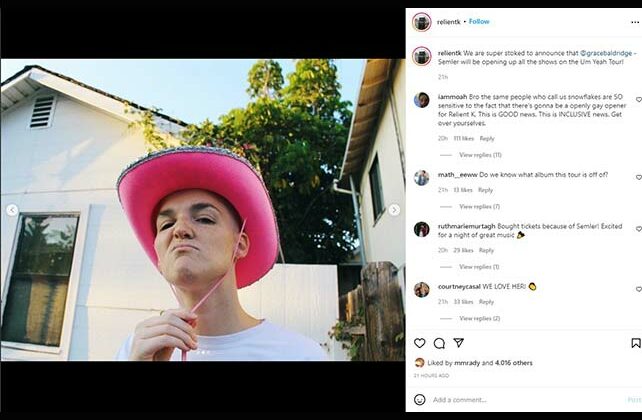 Grace Baldridge, who many know as Semler, is an on-the-rise musician who is openly queer and writes about her Christian upbringing. This week, she announced that she would be joining Christian rock band Relient K as the opening act on their upcoming “Um Yeah Tour,” which starts in February.

“We are super stoked to announce that @gracebaldridge – Semler will be opening up all the shows on the Um Yeah Tour,” Relient K posted on Twitter.

Baldridge made a name for herself in 2021 after two of her EP’s hit the number one spot on the iTunes Christian Albums chart, both times knocking off Grammy Award winning Christian artist Lauren Daigle’s “Look Up Child” from the top spot.

“Um, yeah. I’ll be joining @relientK on tour this year. I fully can’t believe it. Tickets are selling really fast so make your move and see you on the road,” Baldridge tweeted. Baldridge stated that “Relient K is about to have a bunch of gays at their shows this spring now.”