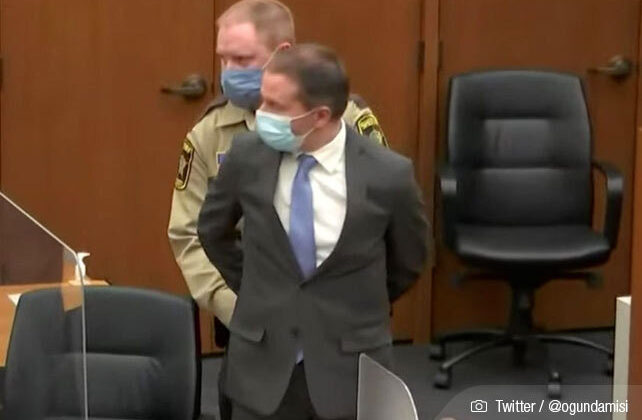 George Floyd‘s brother Philonise prayed and had faith that former Minneapolis police officer Derek Chauvin would be convicted for killing his brother on May 25, 2020. Everyone knows that murder sparked protests and riots across the nation. Floyd’s brother and family’s prayers were answered by the 12 jurors who found Chauvin guilty on all three charges (second-degree murder, third-degree murder, second-degree manslaughter) on Tuesday April 21, 2021.

Philonise told reporters that he felt “relieved today that I finally have the opportunity…for hopefully getting some sleep.” He referenced that technology was “the difference” that helped convict former officer Chauvin.

Faith leaders and Christian influencers immediately reacted to Derek Chauvin‘s guilty verdict, many of whom used the words “justice,” “relieved,” “thankful,” and “work to be done.”

Russell Moore who is the president of the Ethics & Religious Liberty Commission associated with the Southern Baptist Convention said [Twitter]: “Grateful for justice rendered in Minneapolis. Let’s remember today the family of George Floyd. And let’s work together for a new era of racial justice and American hope.”

Former NFL tight end and author Benjamin Watson said [Twitter]: “Tears of sadness and joy. The last year weighed heavily on us all. Justice does not bring the dead back to life but it does protect those who deserve protection and punish these who are deserving. Hasten the day when it is commonplace that the justice system work as it should.”

Samaritan’s Purse CEO and president Franklin Graham wrote [Facebook]: “The verdict is in and Derek Chauvin was found guilty of all charges in the death of George Floyd. Our legal system has worked and justice is being served. I hope all of America and our law enforcement will learn from this tragedy, and that we will become a better nation. My prayer is that our country will come together. I hope Christians will set the example and lead the way. Jesus told His disciples, ‘This is My commandment, that you love one another as I have loved you’ (John 15:12). George Floyd’s life mattered—every life matters to God.”

Esau McCaulley, who is an assistant professor of New Testament at Wheaton College, in an article published by the The New York Times said: “I am relieved about the guilty verdict in Mr. Chauvin’s trial. ‘Happy’ is the wrong word when a life has been lost. Juries can’t raise the dead. One court case can’t restore the distrust that lingers in the hearts of many Black and brown Americans. A single decision is important, but it can’t fix a system. There is still work to do. Mr. Floyd’s family may have some measure of peace, but he was taken from them nonetheless.”

Southern Baptist Convention‘s president J.D. Greear told the Baptist Press: “I know that for persons of color, today’s verdict ties into long-standing questions about justice and equal treatment under the law. As we said in the wake of this incident almost a year ago, we cannot remain silent when our brothers and sisters, friends and/or people we seek to convince of Jesus’ love are mistreated, abused or killed unnecessarily. I have prayed for our leaders as they sought justice and am thankful for their work to that end.”

Author and speaker Trillia Newbell said [Twitter]: “Sorrowful and thankful for justice. Such a difficult year.”

Pastor of Cornerstone Baptist Church in Arlington, Texas, Dwight McKissic said [Twitter]: “Without the video, it would have been a different verdict. Thank God for today, but we still have a long way to go.”

Ed Stetzer, who is the executive director of the Billy Graham Center at Wheaton College and a well-known author, posted on his social media [Twitter]: “Thankful for the verdict in the #DerekChauvinTrial. Praying that the family of #GeorgeFloyd finds comfort today.”

New Season’s pastor Rev. Samuel Rodriguez and president of the National Hispanic Christian Leadership Conference, was quoted by Religion News Service saying: “Today’s decision has demonstrated yet again how far we have to go on our long march toward justice. The wounds of our past continue to bleed into our present reality and the tensions in American life — revealed by this terrible tragedy — have remind(ed) us that there will probably be another George Floyd and another Derek Chauvin. The remedy — politically and judicially speaking — is the blind eye of justice guiding our legislators and judges, but the remedy for the soul of America is empathy, understanding and love of one’s neighbor whatever the color of their skin.”

Preston Perry is a poet, Bible teacher, evangelist, and an apologist who said [Twitter]: “A little taste of Justice on earth. It taste good. In heaven we will feast.”

Minister and Martin Luther King Jr.‘s daughter, Bernice King said [Twitter]: “God knew just how much we could bear. This is a turning point. Let’s continue to correct everything that stands against love. That is true #justice. #BeLove #GeorgeFloyd“

Popular Christian hip hop artist Thi’sl (Travis Tremayne Tyler) said [Twitter]: “When justice is done, it is a joy to the righteous but terror to evildoers. – Proverbs 21:15” — “If seeing justice being served for a man that was murdered on camera makes you angry, you don’t need to check your politics, you need to check your heart, it’s evil!”

Dr. Eric Mason, who is the lead pastor at Epiphany Fellowship Church in Philadelphia, Pennsylvania, quoted Scripture and said [Twitter]: “‘You shall do no injustice in judgment; you shall not be partial to the poor nor defer to the great, but you are to judge your neighbor fairly.” Leviticus 19:15″

Reach Records recording artist Tedashii Lavoy Anderson said [Twitter]: “I am praying for the Floyd family on this day. May God continue to comfort their family.”

Bishop T.D. Jakes, who is a well-known author and Dallas megachurch pastor at The Potter’s House was quoted by the Religion News Service saying: “While we are delighted by the jury’s verdict, we are mindful that there’s still a lot of work ahead of us. Our criminal justice system remains deeply flawed. Black people disproportionately remain victims of police brutality and are more likely to be pulled over or cited for negligible or phantom traffic violations. Let us not relent in our efforts to press our local, state and federal elected officials for police reform, particularly as it relates to qualified immunity, bias training, de-escalation training and uniform hiring standards. My prayer is that this will ignite a safer society where justice is equally allocated to absolutely everyone irrespective of socio-economics, race, religion or gender. Thank you to the many officers who do not stoop to such atrocities and honestly work toward protecting us every day.”

Atlanta’s Cornerstone Church‘s lead pastor John Onwuchekwa said [Twitter]: “Revisited the initial police report of George Floyd’s murder yesterday. I celebrate the sliver of justice we saw yesterday. I use the word sliver intentionally. For a murder (witnessed by other officers) to be reported this way, means that the murderer had accomplices.”

Author, life coach, and Build a Better Us‘s Executive Director BJ Thompson said [Twitter]: “There’s so much DEEP healing we need to do when a single verdict has the power to completely undo our nation.”

Ronnie Floyd who retired after 32 years of ministry as the senior pastor of Cross Church in Arkansas and president and CEO of the Executive Committee of the Southern Baptist Convention said [Twitter]: “While we are extremely grateful for our law enforcement officers who risk their lives daily to protect us in every way, we are also saddened when any misuse of authority causes harm to the very people they seek to protect. When that happens—as the jury determined in this case—justice must be served. Our path forward as a nation should be one paved with standing together, mourning together, committing to truth, and resolving to press forward together in the spirit of Christ, our Prince of Peace.”

Rasool Berry, the teaching pastor of the Bridge Church in Brooklyn, NY said [Twitter]: “I long for the day when an officer being found guilty of murder 4 killing a black man on camera, in front of witnesses, is not historical; it’s just a Tuesday. And I long even more for that day to never come because no more knees will be on anymore necks. #GeorgeFloyd”

After scouring the internet and reading many reactions from Christians’ social media pages and blog articles, it was difficult to find anyone who was praying for Derek Chauvin and his family. The desire for justice weighed more heavily on people’s minds and then rejoicing about the verdict.

While it seems unimaginable to speak words of mercy toward Chauvin after seeing bystanders’ videos of the murder, we could find only one such statement. We found only one church leader who acknowledged that Derek Michael Chauvin is made in the image of God, just as George Floyd was, and just as all of us are.

The pastor of Antioch Baptist Church in Fairfax Station, Virginia, Marshal Ausberry, and president of the National African American Fellowship of the Southern Baptist Convention told the Baptist Press that he is praying for Derek Chauvin and his family.

Pastor Ausberry said, “It is a tragic loss, and there are no winners. The death of George Floyd is one more horrific memory added to the historical trauma that African Americans live with every day. While we don’t know Derek Chauvin’s motivations, his actions resulted in a needless and senseless death. I pray for Derek Chauvin and his family as they also have to live with the consequences of his actions. I pray for George Floyd’s family as they grieve their loss and that God grants them peace. I pray that the justice delivered will help the healing process for them and their community. I hope that the death of George Floyd will bring about police reform throughout the nation. There are many good and dutiful law enforcement personnel – we cannot taint all of them with the actions of Derek Chauvin. But when law enforcement personnel cross the blue line, they need to be subject to swift justice.”