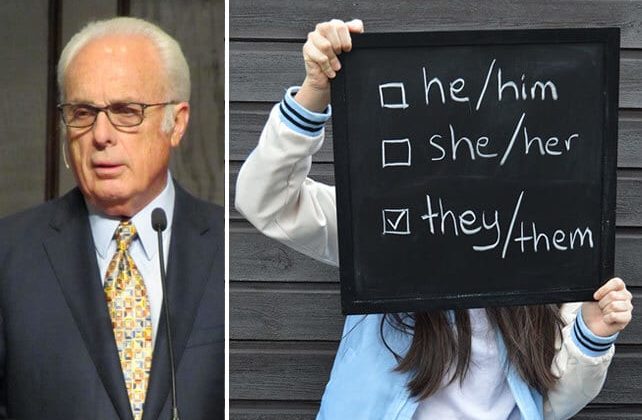 Grace Community Church‘s 81-year-old pastor of over 50 years, John MacArthur, told his congregation this past Sunday that the culture we live in today is systematically declaring war on children as it’s “weaponized to destroy children.”

MacArthur’s sermon title “Providing Shade for Our Children” was inspired by a Chinese proverb. He explained, saying, “One generation plants the trees, the next generation gets the shade.”

As he unpacked the proverb, MacArthur said, “Every generation should understand the responsibility that they have to plant the trees so there is shade for the next generation.” What we’re facing today is fierce! I will confess…of all the things that disturb me in this culture…of all the horrific, sinful, wretched, wicked, corrupt influences that go on in this culture. I think the thing that distresses me most is the war on children.”

MacArthur Gave Examples of How Culture Has Declared War on Children

Over 62 million children “have been slaughtered in the womb,” he factually stated since abortion was made legal in the 1970’s.

If a child escapes the death of abortion, they have a 50/50 chance of being born into a family whose parents are married.

If the child’s parents are married, the likelihood of them getting a divorce is high, and both or one of them will be “unfaithful to their marital vows.”

The probability of that child being sent to a public school and being under the influence of an agenda that is “anti-God, anti-Christ, and anti-Scripture” is also high.

Politicians in our country are passing laws that are “devastating to children.”

“Sexual freedom, homosexuality, and transgenderism” is constantly being pressured upon them as normalcy and if not accepted is called “hate speech.”

“The lies of systemic racism and the hustlers dominate the ideologies of universities and even churches,” MacArthur said.

Children Are Defenseless Against the Relentless Attacks

All the forces of evil have released a relentless assault upon the children this country, who MacArthur said are “defenseless.” He explained that society offers no restraint to those destroying our children, yet encourages it.

Our culture’s defenseless children look like, “When their parents sell them to a human trafficker, who drops them eight to 10 feet over a wall into Sodom and Gomorrah [referring to America] all by themselves,” he described. Giving a children’s media example, MacArthur pointed out that the Disney Corporation created “characters that are transgender to seduce children into accepting wickedness as normal.”

MacArthur also exemplified the quickly growing trend of parents insanely offering “their children gender identity options,” somberly stating that “children are under assault now.” Referring to President Joe Biden’s recent announcement that the government would like to provide free education from the ages of 3 to 20, MacArthur asserted that this extends the negative influences in our children’s lives.

“The president to the leading politicians and bureaucrats, teachers, race hustlers, pornographers, media people, tech people, and even media people” are attacking those who are most defenseless; children. “There is a war on children!”

Children are already forced to endure a world impacted by the sins of their parents when they are born. MacArthur then referenced Exodus 20:5, Numbers 14:18, Jeremiah 32:17-18, and Ezekiel 18 and showed that generational sins create a culture that has to be endured by those born into it. He called it “default reality.”

“This is a very dangerous place for children,” he said after he told the 2014 story of Planned Parenthood workers admitting to illegally selling aborted baby parts to undercover pro-lifers. Instead of Planned Parenthood getting charged with a crime, the government charged the pro-lifers felony counts of violating the privacy of health-care providers for recording without their consent.

“Satan’s war on children is a war on God because the children belong to him.”

Children Are a Gift From God

Reciting Psalm 127:3, the pastor said, “Children are a gift from the Lord.” He later told parents that when your “little ones arrive, you are stewarding them for God.”

“This generation of leaders, the immoral people that are engaged in this massive assault on children are going to have to answer to God,” said MacArthur. He then reminded his congregation, “We’re gonna have to answer, too, for the little ones he gives us.” They are not ours, they are his so our “life commitment” is to influence them to place their faith in Christ. “That is raising your children in the nurture and admonition of the Lord.”