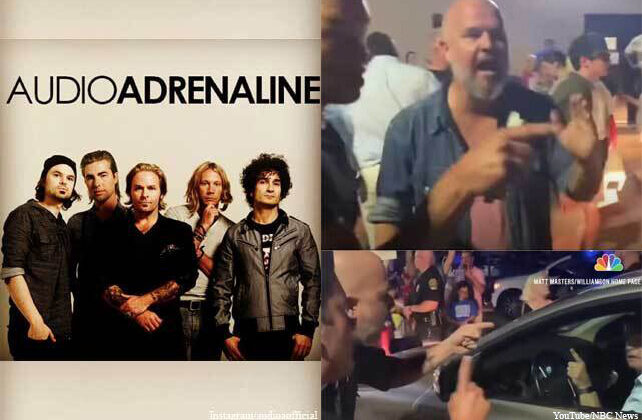 A video of a Tennessee school board meeting in Williamson County went viral after anti-maskers heckled masked healthcare workers and parents leaving the meeting on Tuesday night. During the Williamson County School Board meeting, board members approved a temporary mask mandate for their elementary schools due to the re-emergent rise in COVID-19 cases.

After the meeting, Williamson County School Board members and professional health care workers can be seen exiting the building only to be greeted by a group of unhappy residents and parents who not only disagreed but were also fuming over the decided mask decision.

The Tennessee Holler identified one of those parents as Dwayne Larring, the former guitarist of Christian band Sonicflood, winner of two Dove Awards. Larring also was of a member of the reconstructed iconic Christian rock band Audio Adrenaline in 2013, a lineup Kevin Max was called in to front.

Larring can be seen keeping the peace on a circulating viral video being played on multiple news outlets. But he is also the one shouting at and threatening Michael Miller, a parent and a health care data analyst, who spoke in favor of the mask requirement.

Telling disgruntled parents and residents to “keep it calm,” as they yelled, “No more masks!” and followed Miller to his car, Larring told the crowd that the police were on their side. “Just calm down,” he said.

Larring then turned his attention to Miller, saying, “We know who you are! You can leave freely, but we will find you,” as he pointed his finger in anger not far from his car window.

The former Audio Adrenaline guitarist immediately told the protesting crowd, “Let him out, let him out,” helping police make a path so the health care data analyst could drive away.

Miller said he was “terrified” after he watched the video and had taken a different route home just in case he was being followed.

“I called my wife as soon as I got out of there,” he told CNN, “I called a friend on the way home. I drove the most convoluted way possible home after that. I had no idea how bad it really was until I saw it and someone shared that video with me the next day.”

President Joe Biden praised the health care workers who were threatened after the Williamson County School Board meeting and called them heroes during a press conference Thursday. “This isn’t about politics. This is about keeping our children safe,” President Biden said. “Thank God that we have heroes like you, and I stand with you all and America should as well.”

A video captured by a Kelly Clarkson fan shows the “American Idol” winner and current “The Voice” judge firing Dwayne Larring as her guitarist during her “Breakaway Tour” in 2005. Larring allegedly went rogue on stage, which prompted Clarkson to fire him on the spot. Some reports allege that Larring gave the middle finger to some fans in the front row.

“How many of you know how to respect someone,” Clarkson asked the crowd. “I want everybody to give Dwayne Larring, the guitarist that just went around the stage and tried to ruin this show for you y’all. I want you to give him a hand right now.”

Clarkson continued, “I’m gonna pray for you Dwayne cause you’re gonna need it. You’re gonna need it when I get off this stage…cause nobody…nobody messes with my fans. Am I right? Just try and ruin my show, my brother. Come on! Bring it!”