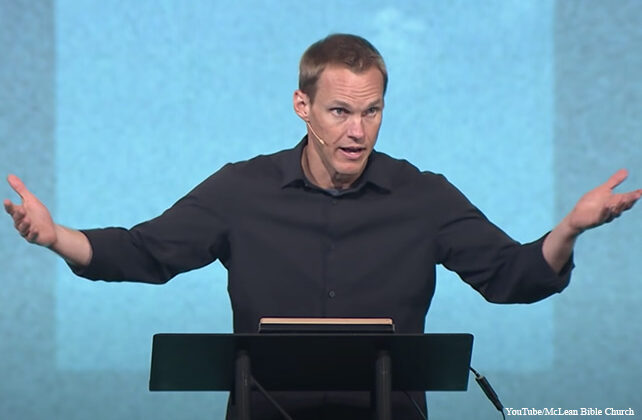 On June 30, 2021, McLean Bible Church (MBC) in Vienna, Virginia, held a members meeting to affirm three new elders via vote. MBC is pastored by former Southern Baptist’s International Mission Board (IMB) president and bestselling author David Platt. At that time, the vote was too close to confirm the new elders because the Church’s constitution states it must have at least a 75-percent affirmative majority to elect a new elder to the leadership team.

In his 4th of July sermon, Platt revealed to the 11,000-plus congregation that a disinformation campaign by a small group had been undertaken to persuade others to vote down the new elders and take control of the church.

Platt continued: “I want you to listen closely to the words I’m about to say.” He asserted that a small group of people within MBC and some outside the church had “coordinated a divisive effort to use disinformation in order to persuade others to vote these men down as part of a broader effort to take control of this church.”

The group had used private church member information, according to Platt. He said the group somehow acquired “a membership list improperly accessed from our database” which it then used to “improperly” contact MBC members. The private information included names, addresses, phone numbers, and birth dates. Platt warned that the improperly acquired information could “cause real harm. All in an effort to keep these biblically qualified men from becoming elders and to try to take control of this church.”

By contrast, all of McLean’s other campuses showed almost unanimous favor for the new elders, except for the main Tysons campus where Platt preaches.

Some of the lies being propagated by the group included telling people in the lobby before the elder vote that leadership would sell the Tysons building if the new elders were affirmed, according to Platt. After the vote, leaders learned that many had voted against the prospective elders because they trusted the sources who lied to them. Those people requested to have their vote back after learning the truth.

Still other members shared with leadership that they had been told the building would be sold to Muslims so they could build a mosque and that MBC would give the proceeds to the Southern Baptist Convention (SBC).

“I wish I was making this up,” Platt said, “but we have emails where this is being passed around to members in the most inflammatory way possible.” The pastor offered clarity to those in attendance and watching online. “It sounds crazy to even have to say this, but just to be clear, we actually want Muslims to know the love of Jesus. We have in writing from the SBC we’re not a member of the Southern Baptist Convention.”

Platt said the buzzwords and scare tactics disseminated through the emails that members had shared with leadership included statements such as, “McLean Bible Church would be gone,” and it was “down road of leaving the gospel behind,” “leaving the Bible behind,” and “embracing liberal theology and cultural Marxism.” Comments also included statements such as, “We would change our stance on abortion and sexuality,” and “We would allow Critical Race Theory, Black Lives Matter, and defunding the police to drive our agenda as a church.”

One of the main disgruntled leaders of the group disparagingly used race as a means to influence a church member’s vote, stating: “ ‘MBC’ is no longer McLean Bible Church; it’s now Melanin Bible Church.” To this, a somber yet stern Platt said, “That is not acceptable for the body of Jesus Christ. That language has no place whatsoever here…We will not apologize for our increasing diversity or our commitment to humbly address racial issues from God’s Word as we unite together on a glorious mission to proclaim this good Word and our great God in a city where 5 million-plus men, women, boys and girls are on a road that leads to an eternal hell and need the good news of God’s love for them.”

Platt said the situation is disheartening because the church has walked through the Bible regarding many of the fabrications about what would happen if the new elders were elected. It seems, he said, “less about God’s Word and more about what this blog or that Facebook post says. As if those sources of information are anywhere close to the authority of [God’s] Word.”

It was also revealed that people who were former members and inactive members who no longer attend MBC traveled to the Tysons campus to cast a planned “no” vote in the elder election, prompting criticism that the ballots had been “stuffed.” Confusion surrounding nonmember and member voting resulted in staff distributing provisional ballots, which caused the final vote to be “too close to call” due to not knowing which ballots could be counted or not.

“We are not going to be in the business of adjudicating which provisional ballot to count or not count,” Platt said, as he outlined the current elders’ decision moving forward. The elders followed the church’s constitution and held another election on July 18, 2021, that resulted in 80 percent of members affirming the three new elders. This vote was observed by an independent third party.

Platt told the church that he believes, “God desires to use all of this division to actually unify our church.”

MBC members Kevin Elwell, Steve Gaskins, Deborah Ash, Roland Smith, and Michael Manfredi filed a complaint against Platt and other church leaders at MBC. Their lawsuit says they were illegally barred from voting in the July 18 members meeting to affirm the new elders. The suit also states that the second election violated McLean’s constitution.

In the follow-up election, church members were required to show identification and their names were placed on their ballot to ensure no one could sabotage the election. Provisional ballots were given to “inactive” members, which included any member who has missed eight straight weeks of in-person worship services, a rule that the suit’s filers say is hard to enforce due to the pandemic.

The plaintiff’s lawyer, Rick Boyer, said Virginia’s law requires churches to follow the rules they place in their constitutions. The plaintiff’s hope is the court will agree with them and force the church to hold a new election, voiding July 18th’s results.

A Facebook page dedicated to voicing concern for the direction MBC is heading was created on June 21, 2021. The page titled ‘Save McLean Bible Church‘ has 469 followers and says its purpose is to restore “McLean Bible Church to the purpose and vision for which it was founded upon!”

Sixteen-year church member Jeremiah Burke identifies himself as the leader for the “small group” Platt spoke about in his sermon, and his wife moderates the ‘Save McLean Bible Church’ Facebook page, which shares articles claiming Platt and the elders are “woke.” Burke believes Muslim leaders are seeking church buildings to purchase and believes McLean’s Tysons property is one of them.

Burke says one of his concerns has been how much money the church has been giving to the SBC, although it is not affiliated with any denomination. He believes “McLean was one of the most influential churches in America. It had an incredible influence over the power players in D.C. We’re coming to try to take the church back. There’s no intention of us leaving the church. I think that’s what David’s scared of.”

Former MBC elder Mark Gottlieb wrote a letter addressing members of the church saying, “Over the last several years, we’ve watched David take the church—the church we built, the church we love, the church we’ve poured our hearts and souls and lives into—and turned it into a political, stripped-down version of what it used to be. Most ministries are gone. The leaders are doing things we disagree with.”

“The unifying concern among those who knew the church is that David Platt is the wrong pastor for MBC,” Gottlieb continued. “We were historically a conservative church, and David is left of center. He’s taken our church down paths we never anticipated.”

The former elder strongly encouraged the small group fighting against Platt and the elders to “admit defeat and walk away.”

Some have used their platforms on Twitter to show support for David Platt and the MBC elders. Justin Giboney, an attorney and president of the ‘&Campaign‘, was retweeted by pastor and author Thabiti Anyabwile, saying, “Some Christians are so worried about the Marxist barbarians at the gate that they’ve completely ignored the white nationalists already in the temple. CRT fear mongering is breaking up churches. Praying for David Platt.”

Author and Christian teacher Beth Moore, who recently left the SBC, tweeted, “If Jesus were up for elder at some of these people’s churches, I am convinced they’d vote him down for being too ‘woke.’ Jesus, Jesus, help us, Jesus. We have lost our minds by the time we’re going after the David Platts. And we’ve lost touch with the Jesus of the actual Gospels.”

Pastor Dwight McKissic said in reference to Beth Moore’s tweet, “A prophetess has spoken. Hear ye her! God will always have a witness. The root of the opposition to David Platt is racism, evidenced by the opposition now referring to McClean Bible Church as “Melanin Bible Church.” Rather than celebrate diversified growth, they push back. Shameful!”