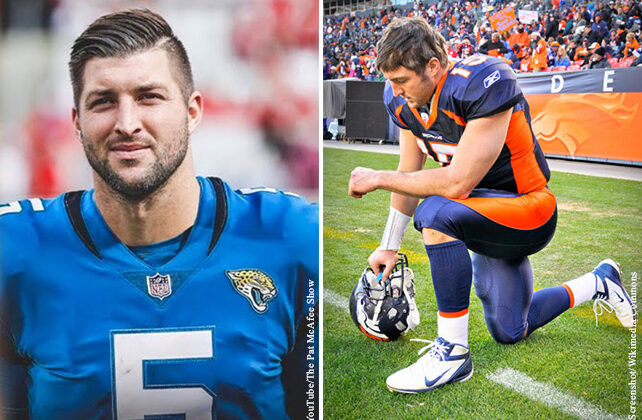 The NFL’s Jacksonville Jaguars announced on May 20, 2021, that they have officially signed Tim Tebow (age 33), one of the most popular Christian athletes in the last decade of professional sports.

The Jaguars’ announcement reads: “We have signed TE Tim Tebow,” and posted an image with a thank you message from the former quarterback. Tebow’s message read, “I want to thank the Jaguars for the opportunity to compete and earn the chance to be part of this team. I know it will be a challenge, but it is a challenge I embrace. I am dedicated to taking the direction of our coaching staff and learning from my teammates. I appreciate everyone’s support as I embark on this new journey.”

“God is so much bigger than a game. And at the end of the day, it’s just a game.”

The multi-talented athlete will switch from his former NFL starting position as quarterback to tight end, a position he has never played in professional sports. Tebow hasn’t played a down in the NFL since 2012, which led critics and skeptics to question the Jaguars’s decision. Some have called Tebow’s contract the result of white privilege because Colin Kaepernick, a Black NFL’er who gained fame and notoriety for his kneeling protest of racial injustice, still hasn’t been signed.

Tebow will join his former Florida college coach Urban Meyer and number-one overall first-round rookie draft pick Trevor Lawrence, who has said, “Football’s important to me, but it’s not my life. It’s not the biggest thing in my life…I put my identity in what Christ says, who he thinks I am, and who I know that he says I am.”

The contract Tebow signed does not guarantee he’ll be playing on the team when the Jaguars visit the Texans in September, which means the 33-year-old will have to work hard to earn the highly coveted 53-man roster.

Tim Tebow told ChurchLeaders.com that “God’s not only enough. He’s so much more than enough,” during a 2016 podcast. ChurchLeaders.com has covered Tebow over the years due to his public, enduring love for Jesus despite significant cultural pushback. What follows are some of our most popular articles.

KISS Rocker Stands Up for Tebow

After critics mocked Tebow’s faith during his previous years in the NFL and just recently criticized him as reports started to leak about his potential NFL return with the Jacksonville Jaguars, KISS’ front man Gene Simmons vocalized his support for Tebow.

Simmons posted on Twitter “I support @TimTebow. He was widely criticized and made fun of, simply because he is a man of faith, who believed in his Christian values. Shame on the NFL and the rest of the world for stooping so low.”

This wasn’t the first time Simmons came to Tebow’s defense. During an interview with Fox New’s Fox & Friends Simmons said, “Here’s a man who believes in God and people pick on him,” says Simmons. “If he was a Jew, or a Muslim and you did that—people would never dare. But for some reason if he’s a Christian, you’re allowed to pick on him. It’s the height of lunacy, and those journalists should be held accountable. They’re never gonna pick on a guy who tortures dogs or has perhaps gone to jail for murder, but if he believes in Christ his Lord, then it’s open season. It’s like, what country are we living in?”

In 2016 Tebow was interviewed on the ChurchLeaders podcast. During the podcast, he said, “When you’re going through the highs, it’s so easy to say ‘God I trust you…I know you have a plan.’ But it’s really when you go through the lows where you really have to trust God for who he is, what he says, and the plan he has for your life.”

Tebow’s Mother Was Told to Abort Him

During the 2021 National March for Life Tebow said doctors encouraged his mother to abort him due to medical complications during her pregnancy.

Tebow shared that a doctor who had over 34 years of experience said, “This is the greatest miracle that I have ever seen, because I have no idea how he (Tim) survived.”

“I’ve been waiting my entire life for someone special, who I can spend the rest of my life with. I was waiting for the right person to come along. And now I’m marrying Demi,” He said. “I can’t wait to see what our future holds. All of my dreams have come true. It was 100 percent worth the wait.”

Everyone Admitted to Tim Tebow’s Hospital Hears the Gospel

The Tim Tebow Foundation exists to “show God’s love to children around the world,” and that is exactly what his CURE Hospital in the Philippians does. Tebow, who grew up on the missions field with his parents in the Philippines said, “Every single person is worth it. They are worth love. They are worth us giving what we have for them.” The former Heisman Trophy winner’s hospital not only cares for physical needs, but also spiritual needs. Every patient hears the good news of Jesus Christ.

In January 2021, Tebow released Bronco and Friends, a children’s book. Tebow says he hopes his book reaches kids for Jesus and encourages kids with special needs.

Touching on individual worth in his book, he said, “When we understand our worth, everything else changes. That we were created in love, by love, for love. That we are unique, that we are special, and that makes you wonderful.”

Since 2013, the Tebow and his foundation have worked to help put an end to human trafficking and rescue victims.

In an op-ed for Fox News, Tebow said, “I’ll never forget the day my dad called me from overseas and told me he had just purchased four young girls.” He admitted that in his mid-twenties, Tebow didn’t even know such a transaction could take place.

Tebow Prays for Fan Having Seizure

Tebow’s iconic prayer stance isn’t and has never been just for show. Tebow believes in the power of prayer. During a Met’s minor league autograph session, a fan in the stands started having a seizure while Tebow was signing autographs. Tebow laid his hand on the fan and started praying for him. It was reported that immediately the man’s seizure stopped.

‘Night to Shine‘ is a prom hosted by the Tim Tebow Foundation centered around God’s love for people with special needs. The event celebrated its seventh year in 2021 and regularly has over 500 churches hosting yearly ‘Night to Shine’ extravaganzas.

Tebow posted on his Instagram that his foundation opened the Ekisa Tebow Community Center in Iganda, Uganda. The Tim Tebow Foundation is partnering with Ekisa Ministries to help fight for children and families in Uganda. Tebow said, “This center will bring critical support services including comprehensive healthcare, education, counseling, and financial empowerment, and will ultimately help caretakers become their child’s biggest advocate as they learn the inherent, God-given value and worth of all individuals. Thank you for coming behind our mission, we can’t wait to see how this center changes lives!”