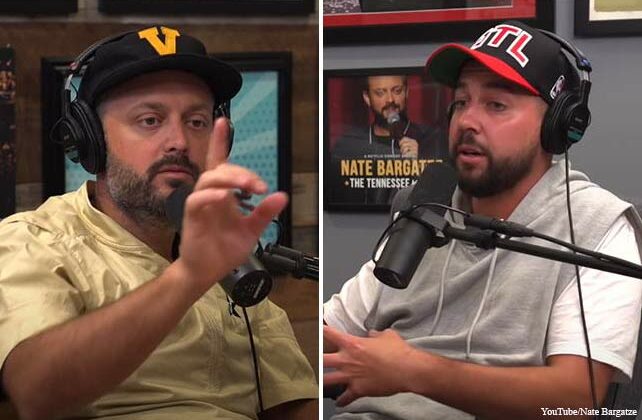 Last month, Nate Bargatze, the popular “clean” comedian who has multiple Netflix specials and grew up Southern Baptist featured Christian comedian John Crist on his podcast “Nateland.” Bargatze, along with fellow comedian and co-hosts Brian Bates and Aaron Weber, welcomed Crist to sit around their podcast table and discuss John’s past controversies, the evolution of Christian comedy, doing Christian jokes, and being labeled a “Christian” comic.

Crist became a Christian household name in the summer of 2016 when he and pal Aaron Chewing released a video title “How It’s Made: Christian Music” that has over 2.8 million views on YouTube to date. In 2017, Crist sold out his twenty-city “Captive Thoughts” headlining tour, but the pastor’s son’s growing fame came to a crashing halt when Charisma News released an exclusive article in November 2019 detailing testimonies from five young women whom Crist allegedly had manipulative sexual relationships with.

Crist said he got pulled over for speeding on his way to the podcast and the cop told him that he Googled him because he thought he looked familiar. Crist said he made a joke to the officer, saying, “Well, look me up on socials. Don’t Google me,” alluding to the negativity regarding the comedian’s sexual misconduct and harassment that has surrounded him in recent years.

“You got to the root of the problem,” Bargatze said, telling Crist that he had started out performing at churches. “Now, you’re doing no churches.”

Crist said rehab taught him to put himself in other “people’s shoes” so he could understand their feelings instead of his own. He said he gained popularity because Christian moms who were known in their churches and communities shared his videos with friends, saying, “Look at this guy, John Crist. He’s hilarious. We love him.” He acknowledged that for this audience to read about him regarding sexual misconduct is “probably a huge bummer.” Crist said, “If I were her, I’d be pissed because, [she is thinking] I shared my platform with you to everyone I know. I’d be mad, too, because you were saying something that you were not [living].”

“I got in trouble for behaving narcissistically in rehab,” Cris said, because he wasn’t looking for or caring about other people’s perspectives. Bates then asked Crist if he was happy that the Charisma News article had been written.

“100 percent,” Crist replied. He said he remembered the day the story was published because Charisma News notified him it was about to be released. He described the dire anticipation he felt about waiting for the story to go live for the world to read.

“Not once from that time forward have we ever deleted anyone’s comment or tried to block anyone,” Crist said. “This life is way better. The only thing worse about what happened to me was the last 10 years prior, because I was drinking and doing all that kind of stuff and I felt if [my audience] knew, they would all crush me. That’s what I lived for the whole comedy career — and that [hidden lifestyle] was horrific.”

The Response After Crist Returned to the Stage

Crist said when the sexual allegations were released in the Charisma News article on November 5, 2019, he became suicidal.

“That’s what’s wild,” Crist said, adding that growing up, he learned that “Christianity is very shame-based…if you did something bad, you don’t say it, you hide it.”

Crist described encountering a family at a restaurant who recognized him and called out his name after he’d left rehab. Crist said expected them to “say I’m a bad Christian or a bad influence on kids or a bad role model.” Instead, the family told him, “We just want to let you know that we missed you and we’ve been thinking about you and we’ve been praying for you.” The ‘Church Hunters‘ star told the other comedians that the family’s actions and words confused him because he thought when everyone knew his [sin], “It’d be the end of me.”

“When you’re growing up, your parents would close the door of your room,” Crist said, recalling that his parents would warn him when he was younger that whatever he did [in secret], “God’s watching!”

“God’s coming for you if He catches you doing anything” is the lesson Crist said he learned, and added that it is a scary thing to say to a 5-year-old.

The four comedians talked about the evolution of Christian comedy over the years. Crist said Christian comedian and Gaither Vocal Band alum Mark Lowry told him, “I don’t know how you’re getting away with saying some of this stuff, because I said the phrase ‘breaking wind’ and got kicked out of a church.”

Crist will join the “Fresh Cuts Comedy Tour” in September, none of which will be held in churches.

Watch the entire podcast interview below. Warning: The comics use the dark times in their lives as part of their comic acts. Their comments could be viewed as insensitive to some.