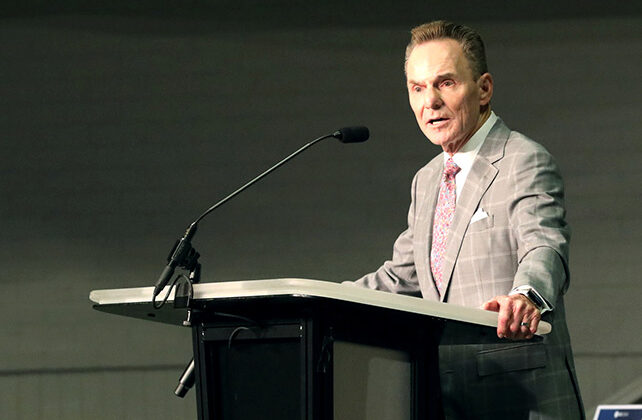 Ronnie Floyd, the president and CEO of the Southern Baptists Convention (SBC) Executive Committee (EC), announced his resignation Thursday night in a letter sent to the Executive Committee and SBC members. The letter states he will stay on to serve through the month of October.

The SBC is the largest Protestant denomination in America, consisting of an estimated 14 million members.

In his letter, Floyd told his “SBC family” that he was asked to serve as the SBC EC’s president because of his “proven personal integrity, reputation, and leadership.”

“What was desired to be leveraged for the advancement of the gospel by those who called me here, I will not jeopardize any longer because of serving in this role,” Floyd said.

Floyd’s resignation comes amid an ongoing investigation into whether the SBC EC mishandled allegations of sexual abuse. The EC recently voted to waive attorney-client privilege (ACP), a decision Floyd firmly stood against, siding with the SBC’s legal counsel’s recommendation.

Earlier this week, the SBC’s longtime general counsel decided to cut ties with the EC after its ACP decision.

Floyd recently came under fire when a leaked recording of him surfaced just before the SBC’s annual meeting this past June. In that audio, Floyd can be heard saying, “I’m not scared by anything the survivors would say — I’m thinking, the base. I just want to preserve the base.”

In his resignation letter, Floyd pushed back against the criticism he has received. “One of the most grievous things for me personally has been the attacks on myself and the trustees as if we are people who only care about ‘the system,’” Floyd wrote. “Nothing could be further from the truth.”

Floyd reaffirmed his commitment to honoring the will of the SBC messengers with regard to the sexual abuse investigation, explaining that the recent meetings about waiving ACP were “about how to do this in the most effective way.”

Floyd also shared that the decision to waive ACP has forced some of the SBC’s laypeople who serve the trustees to submit their resignations, because their profession won’t allow them to serve due to the potential risks.

The 65-year-old Floyd stressed in his letter that sexual abuse “abhors” him, saying, “As a husband, father, and grandfather of seven, I deeply care about the protection of all people.”

Adam Wyatt, EC Member and pastor of Corinth Baptist Church in Magee, Mississippi, sent an email to The Tennessean on Thursday stating, “It is also important to remember that each one of us serves at the will of the convention. But it is also important to remember that the staff works for the trustees. And, right now, there is a bit of a cloud over all of us and it is going to take an awful lot to remove it.”

“As a new trustee, I am not sure that I can completely trust everything that is going on within the executive leadership of the EC,” Wyatt said. “A lot of what I have seen, at least on the major issue of our response to the sexual abuse allegations and investigation, have not seemed to be very proactive.”

The Tennessean reports that the letter Slade received didn’t specifically call for the termination of Floyd or Addison, though it did voice serious concern.

Mike Keahbone, senior pastor of Oklahoma City’s First Baptist Church Lawton, told the Tennessean Thursday via a telephone call, “I think it’s just good for us to be able to get together and ask, ‘Why are these things out there? What’s causing it? Are there things we can do to build trust and to strengthen integrity?’”

A number of SBC messengers and leaders have voiced their reactions to Floyd’s announcement on social media.

Pastor Dwight McKissic of Cornerstone Baptist Church in Arlington, Texas tweeted, “I had no idea Dr. Floyd would be resigning today as SBC EC President. However, after prayerfully & carefully reading through John 15:1-12 early this morning, The Lord laid this tweet on my heart. Love Ronnie Floyd. But,I truly (sic) believe all we are witnessing is The Lord’s doing.”

Pastor of 2nd Baptist church in Arkansas, Josh King, said, “I am thankful @EdLitton is #SBC Pres. And very thankful @jdgreear had been the previous 3 years. What looks chaotic right now is the stripping away before a better thing is built. You can’t fix decades of rot without some demo. #GCB@SBCExecComm“

Tom Ascol, the president of Founders Ministries tweeted, “The SBC is a dumpster fire & there is enough blame to go around for all SBC pastors.”

Sexual abuse survivor and advocate Hannah-Kate Williams shared, “It’s a celebration when one who has caused you & your family such harm is no longer allowed the power to do that. But along that celebration comes grief that the one who has harmed you also dishonored your King, & in doing so w/out repentance is missing out so much life. #sbc“

SBC President Ed Litton tweeted, “Isaiah 46:10 I make known the end from the beginning, from ancient times, what is still to come. I say, ‘My purpose will stand, and I will do all that I please.”

EC Member Adam Wyatt tweeted, “There is a large group of survivors who daily walk in integrity despite the way they have been cast aside by the people who have been called to honor them. They are the real heroes even if there are no stained glass windows in their name. #sbc#sbctoo“

Mike Keahbone, another EC Member tweeted, “I have never known a leader worth their salt who quit their team in its most crucial hour. Adversity shines a bright light that exposes greatness or weakness.”

Senior pastor of ADA First Baptist Church in Oklahoma, Bradly Graves, said, “I love and am praying for @ronniefloyd and Jeana Floyd in the days ahead.”

I was planning to release this letter on Monday, October 11th; however, I delayed the publishing of this letter until today, due to the death of my mother-in-law on Sunday and then the funeral which took place on Wednesday afternoon in Bridgeport Texas, October 13th.

After serving as the Senior Pastor of the same church for over thirty-two years, I came here twenty-eight months ago in good faith because I believed in what we do together to advance the Good News of Jesus Christ to the whole world. It was this personal and pastoral commitment to the Great Commission vision that moved me to lead my church to invest heavily in the Cooperative Program and the ministries of the Southern Baptist Convention.

The Bible tells us in Psalm 90:12 these words, “Teach us to number our days carefully so we may develop wisdom in our hearts.” We are told these words because each of our days are limited and we must determine how we believe God wants us to use them for His glory.

While Jeana and I have no idea where we are going and what we will do in the future, today I submit my resignation as the President and CEO of the Southern Baptist Convention Executive Committee. I will serve through Sunday, October 31, 2021.

In the midst of multiple challenges facing the SBC, I was asked to come here because of my proven personal integrity, reputation, and leadership. What was desired to be leveraged for the advancement of the gospel by those who called me here, I will not jeopardize any longer because of serving in this role.

As President and CEO of the SBC Executive Committee, I have fiduciary duties. The decisions made on Tuesday afternoon, October 5th in response to the 2021 Convention now place our missionary enterprise as Southern Baptists into uncertain, unknown, unprecedented and uncharted waters. Due to my personal integrity and the leadership responsibility entrusted to me, I will not and cannot any longer fulfill the duties placed upon me as the leader of the executive, fiscal, and fiduciary entity of the SBC. In the midst of deep disappointment and discouragement, we have to make this decision by our own choice and do so willingly, because there is no other decision for me to make.

Our SBC Executive Committee has had an unwavering commitment to doing this needed review. Our commitment has always been to fulfill the desires of the messengers, but the deliberations were about “how to do this” in the most effective way. There was a way it could have been done that fulfilled these desires without creating these potential risks relating to the Convention’s liability. Sadly, even some of our laypeople who are serving as our trustees had to submit their resignation because their profession will not permit them to serve any longer due to these risks that now exist. Others will have to do the same also. This is unacceptable and should concern every Baptist layperson. The SBC entities need more laypersons, not less, who bring their professional expertise in law, finance, and other disciplines to us.

I was a pastor for over forty years. My entire life has been devoted to serving Christ and His people. The thought of any sexual abuse done to anyone abhors me. As a husband, father, and grandfather of seven, I deeply care about the protection of all people. Every Executive Committee staff member who is serving with me, along with trustees that I know, has been united in our desire to care for people while at the same time doing what we have been asked to do by the Convention.  One of the most grievous things for me personally has been the attacks on myself and the trustees as if we are people who only care about “the system.” Nothing could be further from the truth.

Through the end of this month, I will ensure our team is ready to complete the matters that will accomplish the will of this Convention. I will also continue to carry out my ongoing responsibilities.

We love Southern Baptists and will continue to love you and the mission we do together. As the Treasurer of the SBC, it is a privilege to announce to you this week, that over $702.6 million dollars have been given this past fiscal year through our Total Cooperative Program Giving, Lottie Moon Christmas Offering for International Missions, and Annie Armstrong Easter Offering for North American Missions. This generosity has occurred over these past twelve months as we have each navigated through this global pandemic.

As I walk away from these responsibilities that I have cherished and still cherish today, I know we have been faithful to champion the work we do together in the Great Commission and through the Cooperative Program. We have also led our Convention to adopt Vision 2025, a unified Great Commission vision. We have also led our team to prepare and serve the largest SBC Annual Meeting in decades. Furthermore, we have led our Convention to amend our SBC Constitution declaring that churches will no longer be in friendly cooperation with us who are acting in a manner inconsistent with the Convention’s beliefs regarding sexual abuse and even others who may be acting to affirm, approve, or endorse discriminatory behavior on the basis of ethnicity. These actions will endure the test of time because they are now in the governing documents of our Convention. We have led our Convention to grant to our SBC Executive Committee the national ministry assignment to elevate the ministry of prayer in our churches. This is desperately needed and it was my desire to do it in the highest manner.

To our staff team and trustees, as well as all of our partners in the Great Commission, we love you and thank you for this high honor to have served you. To all of the pastors and to all of the churches, and the missionaries across the globe, I have been faithful to your causes daily and have always had you in my heart as I weighed the heavy decisions that came across my desk.

May God and His favor continue to rest on all of our Great Commission work together.