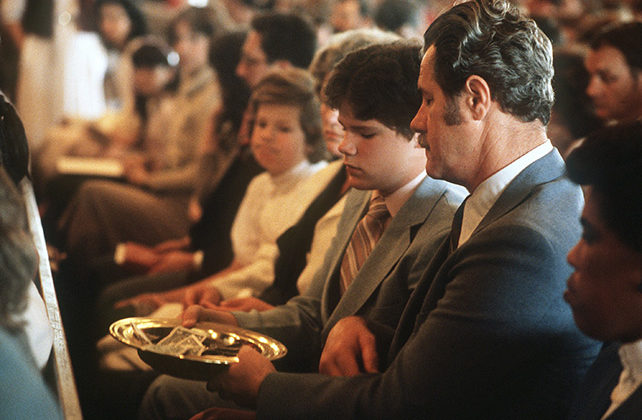 Give a good sermon, and church coffers will fill up. But a bad sermon comes with a cost.

”It is no accident that the collection comes after the sermon,” Farley warns. “It’s like a Nielsen rating.”

These days, preachers may be able to avoid the sting of a bad sermon, at least in the short term — as passing the offering plate, once a staple of worship, has largely halted due to the COVID-19 pandemic. And given the rise of a cashless society — and the popularity of electronic giving — the days of passing the plate may soon be over.

At City Church in Tallahassee, Florida, giving online was already in place before the pandemic, and many church members took advantage of it. The congregation would pass the offering plates while a leader talked about the church’s ministry, followed by a prayer.

That changed — as did a number of the regular features of worship services — because of COVID-19.

“It seemed like everything that had anything to do with human touching had to be gone — serving coffee, passing out bulletins, shaking hands, passing the plates,” said City Church pastor Dean Inserra. “We just thought that was what you’re supposed to do, so we just got rid of all those things.”

Stopping the offering during services worried Inserra at first, as did the disruption of weekly, in-person worship. He wondered if people would stop giving if they could not go to church.

“I was terrified, just to be honest, when the pandemic first happened about what would happen to the church financially,” he said. “Those fears have not been met.”

Instead, the church’s giving went up during the pandemic. He credits the automated nature of online giving for making it easier for people to support the church.

“They don’t forget, or they have a set amount so it is not an impulse kind of giving,” he said.

In 2006, only about 1 in 4 congregations (27%) in the U.S. accepted donations by credit card or electronic funds transfers, according to the National Congregations Study.

The 2020  COVID-19 Congregational Study from the Lake Institute on Faith & Giving found similar acceptance of online and electronic giving. Before the pandemic, 73% of churches could already accept donations online, “and among those that did not, 39% scrambled to add online giving options shortly after they ceased in-person services.“

Almost all (94%) churches of more than 100 people could take online donations, the Lake Institute study found. By contrast, more than half (54%) of churches with fewer than 50 people in attendance said they had no online giving options.

“People pretty much send checks,” said the Rev. Elizabeth Jones, St. Luke’s pastor. Because they are a small congregation — only about 30 members — the church has been able to meet in person during much of the pandemic, with some modifications. The church has streamed services and Bible studies but hasn’t been ready to allow giving online.

Jones said some church members are uncomfortable with the idea of electronic giving. Others like the ritual of passing the plate. The church stopped doing that when the pandemic started on the advice of the Centers for Disease Control and Prevention and denominational officials, said Jones, who still is stressing COVID-19 precautions. Now that most of the congregation has been vaccinated, some church members want to get back to the way things used to be.

“I had two people tell me that ‘if I don’t see a physical plate being passed in front of me, I forget to give my offering,’” said Jones.

The idea of churches taking up offerings goes back to the New Testament and was often a way to collect money to help the poor, said James Hudnut-Beumler, author of “In Pursuit of the Almighty’s Dollar,” an economic history of Protestant churches in the United States.

The spiritual practice of tithing by ordinary Christians was mainly aimed at offerings for the needy — offering through a “poor box” — rather than paying for the operating needs of the church. Instead, churches relied on wealthy patrons and political leaders for support.

Eventually, churches in Europe would be supported by tax dollars collected by the government, which is still the case in some countries.

While some American colonies had state-funded churches early on, most churches in the United States had to find new ways to pay their bills. The Constitution’s ban on established religions essentially turned pastors into fundraisers.

“Renting pews was pretty typical. You got a better pew up front, just like a theater ticket,” he said.

Revivalist Charles Grandison Finney and other evangelicals were opposed to pew rentals and began to build churches where seating was free in the early 1800s, said Hudnut-Beumler. They also popularized the idea of passing the plate for a collection. By the 1900s, the practice had become commonplace.

The collection plate may make a comeback at some churches.

Josh Howerton, pastor of Lakepointe Church, a multisite congregation in Dallas, said his congregation stopped passing a collection plate last year, following CDC recommendations. Now that the CDC has advised that the risk of COVID spreading on surfaces is low, Lakepointe has begun using paper “connect cards” for visitors to fill out during services again.