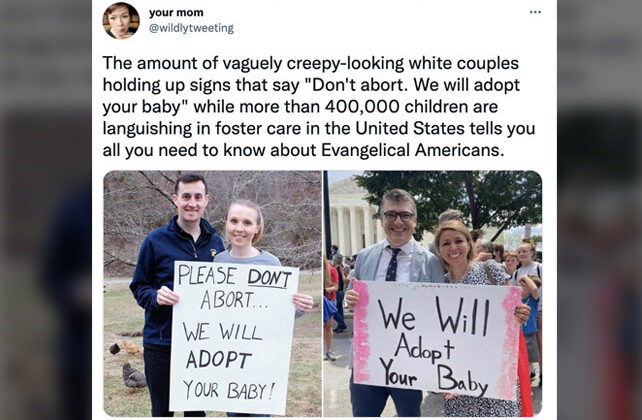 Following Friday’s Supreme Court ruling that overturned Roe v. Wade, Americans on both sides of the abortion debate attended weekend rallies and protests. In the sea of homemade signs, a few stood out—and these signs are now being ridiculed online.

On Twitter, two photos are going viral of white couples holding signs stating “We Will Adopt Your Baby.” One was first posted on June 25 by a Twitter user who described it as “my favorite sign yesterday.” The date of the other image isn’t specified.

‘We Will Adopt Your Baby’: Abortion Supporters Call Signs Disingenuous

The couples and their signs are now targets of abortion advocates who criticize the sentiment as well as the system. One person tweets: “The amount of vaguely creepy-looking white couples holding up signs that say ‘Don’t abort. We will adopt your baby’ while more than 400,000 children are languishing in foster care in the United States tells you all you need to know about Evangelical Americans.”