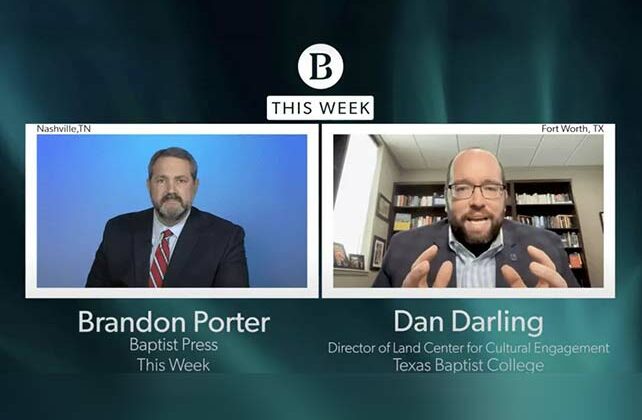 NASHVILLE (BP) – As the fall election season approaches, professor and author Daniel Darling said voting is just one of the responsibilities Christians have when it comes to political engagement.

Darling is the director of Land Center for Cultural Engagement at Southwestern Baptist Theological Seminary and associate professor for faith and culture at Texas Baptist College.

In this week’s “Baptist Press This Week,” Darling identified some of the key issues in this upcoming election as religious liberty, the sanctity of life, the economy and education.

Darling said voting is just one important way Christians can be involved with politics.

“As Christians in a representative republic like ours, we have been given the stewardship to shape policy that affects our neighbors,” Darling said. “If we’re to love our neighbors as ourselves, we should care about the institutions and the policies that affect our neighbors’ flourishing. We have this stewardship, and I think we should steward it well.

“At a baseline level, I think voting requires some responsibility to try to get to know the candidates as best as we can to listen to what they’re saying and hear them out. You’re always making difficult choices, so I think you make the best decision according to the principles from scripture that you hold dear.”

Even after voting, Darling said there are responsibilities Christians have regarding political candidates.

“I also think once you vote, hold that candidate accountable,” he said. “I think one of the things that happens sometimes is we think, I voted for them so I have to be a champion for this person and defend everything that they do, good behavior or bad behavior. I think a vote is just a small part of that. I think we vote the best way we can for the policies we think are important, and then really try to hold them accountable that way.”

RELATED: Daniel Darling: How To Disciple Your People To Use Social Media

Darling said believers should also consistently pray for political leaders. “Someone who steps forward to run for office is really putting themselves out there, with their families and everything,” he said. “For the people willing to step up, we should pray for them as first Timothy 2 says.”

In addition to his work in writing and education, Darling has served in pastoral ministry in Tennessee and Illinois. He said pastors have the opportunity to lead the way in engaging with politics in a healthy way.

He stressed that for Christians, politics is not the ultimate hope.

“If we understand that we’re ultimately citizens of another kingdom, that’ll make us better citizens here, that’ll help us engage in a way that is courageous, civil and doesn’t put all our hopes on the next election,” he said. “We would understand that what happens every Sunday at your local church is really the most important thing happening in the world.”