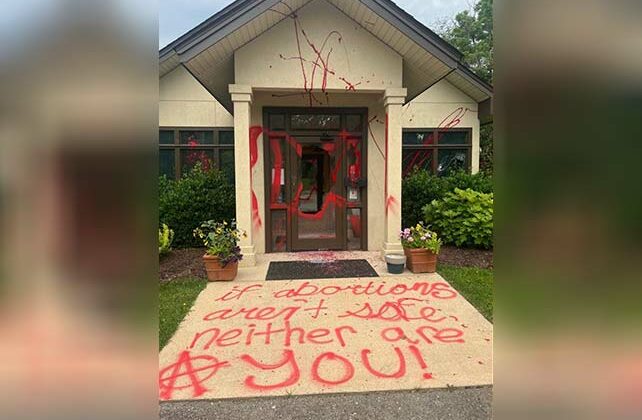 NASHVILLE (BP) – An increase in attacks on pro-life centers has led those groups to call for prayer and protection.

On the morning of June 7, Mountain Area Pregnancy Services in Asheville, N.C., shared pictures of vandalism that had occurred at its offices overnight, including threatening messages spray-painted in red and shattered and broken windows around the building.

“If abortions aren’t safe, neither are you!” and “No forced birth” accompanied an anarchist symbol, the Asheville Police Department said.

That act followed at least three others. One occurred over Memorial Day weekend when a pregnancy care center in Hollywood, Fla., was also defaced with similar threats. On June 3 red paint was splashed on the front door of the Capitol Hill Pregnancy Center in Washington, D.C., with the words “Jane says revenge” spray-painted on the building’s side, an apparent reference to Jane Roe, pseudonym of the plaintiff in the landmark Roe v. Wade Supreme Court decision, which appears likely to be overturned this month. On the same day of the Asheville attack, a Buffalo, N.Y., pro-life center was firebombed and graffiti scrawled on its exterior.

“We abhor this vile attempt to terrorize a center that cares for women in crisis and works to save pre-born lives,” he told Baptist Press. “Mountain Area Pregnancy Services is a beloved partner to many of our churches in the Asheville area.

“Because of our commitment to stand for life and the generosity of N.C. Baptists, we immediately offered financial assistance to help them recover from this attack. I pray this ministry’s bold Gospel witness shines brighter than ever before in their community.”

“Around the country, hundreds of pregnancy resource centers provide medical care, practical resources and save the lives of thousands of preborn children,” said Chelsea Sobolik, the ERLC’s director of public policy. “It is extremely disheartening that violence and vandalism has been perpetrated against these lifesaving clinics. We should all condemn violence in every form, and in this moment, redouble our efforts to support these important centers.”

Vandalism toward pro-life centers increased sharply after a leaked memo last month pointed to an upcoming Supreme Court ruling that would, in effect, reverse Roe v. Wade, the decision that ensconced abortion into federal law.

With that ruling still not public, pro-abortion activists have maintained pressure and threats against pro-life groups. A 26-year-old California man was apprehended outside the home of Justice Brett Kavanaugh on June 8.

The man admitted he had traveled there to kill Kavanaugh, who was at home with his family, before killing himself. He told authorities he was upset over the leaked memo and how he expected Kavanaugh to vote in future cases regarding gun rights. Police recovered a Glock pistol, tactical knife, screwdriver, nail punch, pepper spray, zip ties, pistol light, duct tape, hammer and a crowbar from the man’s pack.

Attorney General Merrick Garland ordered just last month to increase 24/7 protection at the homes of all Supreme Court justices. A June 7 memo issued by the Department of Homeland Security cited the upcoming SCOTUS decision as the impetus for individuals “both for and against abortion” calling for violence on public forums. That violence includes coming against “government, religious and reproductive healthcare personnel and facilities, as well as those with opposing ideologies.”

A bipartisan bill that would expand security protection for immediate family members of Supreme Court justices has stalled in the House of Representatives.