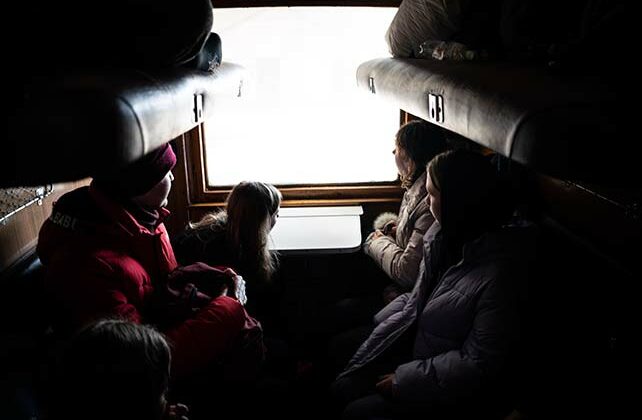 BIRMINGHAM, Ala. (BP) – The nearly 200,000 orphans in Ukraine are especially traumatized by Russia’s invasion that has displaced millions of civilians, according to a Southern Baptist adoption and orphan care minister who has adopted three children from Ukraine.

“The thing that we know most fully is that everyone in Ukraine has now become vulnerable, and that means that orphans who are already vulnerable and marginalized in their society, in most cases their vulnerability has only increased,” Rick Morton, vice president of engagement for Lifeline Children’s Services, told Baptist Press.

Lifeline, which has worked to help Ukrainian orphans and facilitate adoptions there nearly 20 years, partners with many Southern Baptist churches and Send Relief, as well as ministries and churches in Ukraine and Romania. Lifeline is helping Ukrainian refugees in Romania, providing food, clothing and shelter, and is preparing to provide trauma-care training with the help of various partners, including Heritage Ukraine and missionaries Madison and Yuriy Perekoity. The Perekoitys, currently stateside, will return to Europe in April. Other partners include the Romania Without Orphans Alliance.

“Part of the next phase of our work is helping to support Madison Perekoity and others,” Morton said, “in taking those trauma-informed care resources and using them to train people in the surrounding countries how to respond to the unique needs of people … that have been traumatized as a result of the war.

“We’re actively adapting that work now and will in the next couple of weeks begin to be on the ground in teaching that and helping to build capacity for ministry leaders there” in trauma-informed care.

International humanitarian group Save the Children counts 100,000 orphans still in Ukraine, housed in close to 700 children’s homes there, Forbes reported. But Morton’s sources put the number at about 180,000. As Russia bombs Ukraine in various places including civilian targets such as hospitals, schools and residential buildings, Morton said orphans are assured of no safe place to hide.

“The number we hear floated around is about 180,000 kids that are in Ukrainian orphanages. Around 90 percent of those kids are not adoptable; they’re not true orphans. So a lot of them are social orphans that still have family ties and there’s at least the possibility for reunification (with their families.),” Morton said. “And then, frankly, one of the things that’s kind of misunderstood is in the child welfare system in Ukraine, a lot of the children in orphanages have special needs that this is how they receive their schooling.”

Lifeline Services is frequently communicating with partners in Ukraine during Russia’s attacks, particularly in Odessa in southwest Ukraine, and sending resources to refugees served by the Regen Foundation at an orphanage in Fagaras, Romania, that was temporarily closed during the COVID-19 pandemic. Many Baptist churches in Romania are helping those efforts, Morton said.

“We’re staying in close contact with quite a few (partners). It’s very chaotic. The number of displaced people within Ukraine is epic. I heard a statistic from one of them that there are as many as 8 million people that are either internally displaced in Ukraine or have fled the country and become refugees.

“Just the shear strain of people picking up and moving, the response that’s needed on the ground in the places people have fled to, and then I think the other thing is just the uncertainty,” Morton said. “They don’t know where the attacks are going to come. … Immediately they need food, clothing and shelter, but beyond that, they’re very much craving stability.”

Lifeline began its ministry in Ukraine as an international adoption agency, but expanded it to include orphan care because of the unique orphan population there. The ministry is particularly dear to Morton, as he is the adoptive father to three Ukrainian children, now adults.

“I think we need to anticipate that the effects of this war are going to continue for a long time. There are going to be a lot of kids that are going to need safety and security and stability and they need churches, they need the body of Christ to rise up to help them meet those needs,” Morton said. “And we know that the true hope of Ukraine is not the end to the conflict. The true hope of Ukraine is the Gospel, and it’s Jesus. And so we’re both praying and actively working to bring the Gospel to bear in the lives of vulnerable children and as we’re trying to help them experience safety and security right here and right now.”

Morton encourages Southern Baptists to pray for Ukrainian churches and pastors who are remaining at their posts there, to give financially through reputable ministries including Send Relief and Lifeline, and to advocate for the U.S. government to aid the people of Ukraine.

“Ukraine’s like a second home to us,” he said of his family. “This has been a hugely challenging time for our family just because if we’re watching these things on television, these are people that we know and places that we’ve been, and are tied up in memories with just dear friends who, many of them, are still on the ground and serving and faithfully trying to walk out ministry to people who are in great need now, both great physical need but also in need of Christ.”