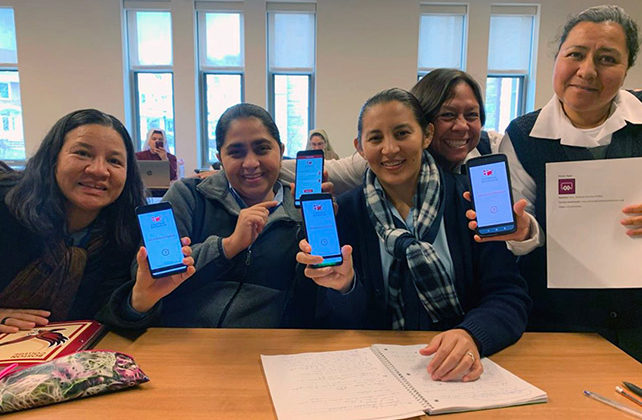 (RNS) It took some getting used to, but sister Maria Minerva Morales is now a faithful user of a cell phone app where she documents her interactions with people she ministers to.

Through the app, Morales — who is part of the Catholic congregation Missionaries of Charity of Mary Immaculate — documents the name, gender and age of the people she interacts with or those who seek her help. She notes whether it’s the first time she’s spoken to the person and whether they met up in person, over the phone or through Zoom. She also documents the nature of their meetings.

The app, which her fellow sisters began using around early March 2020, was developed by Catholic Extension — a nonprofit that invests in churches and ministries in working-class communities — to track nuns’ interactions and the kinds of resources they needed to do their ministry. As COVID-19 struck the nation, the nuns recordings may have been scarcer at first because they were no longer publicly meeting people, but as they logged their virtual and phone interactions, certain trends began to emerge.

Depression, anxiety, suicidal thoughts — especially among the Latino immigrant community — were common themes the nuns were documenting and encountering in their ministry.

This kind of documentation has helped Morales, who is based in the Diocese of Little Rock in Arkansas, quantify the mental health needs of the people they were assisting.

“This has helped me see the amount of people who have suffered from depression through the pandemic,” Morales said.

The sheer trauma the sisters have encountered is palpable, said Joe Boland, vice president of Mission at Catholic Extension.

“You can see in the numbers how much mental health was just a real concern,” Boland said. “That’s what the sisters were encountering. Our sisters are not psychologists and we’re not going to make them psychologists over night.”

The sisters are part of Catholic Extension’s U.S.-Latin American Sisters Exchange Program that assists parishes in the U.S. lacking Spanish-speaking leaders in their churches. The sisters help congregations address the spiritual needs of Latino immigrants in their neighborhoods.

Since using the app, 30 sisters across the country, from Arkansas to California, have logged 18,000 interactions.

Through her interactions, sister Zuly Cardenas has encountered issues dealing with unemployment and people who are depressed and have expressed suicidal thoughts. Issues have emerged with more people being indoors during lockdown measures.

“We can really see all the need that people require in this moment,” said Cardenas, who is based in the Diocese of Sacramento.

As a result of these trends, many of those sisters will undergo specific training to address the  types of trauma they are encountering in their communities.

Through the Trauma Recovery Associates, a nonprofit created by the Rev. Kenneth Schmidt and psychologist Sharon Froom, the sisters will undergo training that can help those they minister to “identify conflicts, unlearn specific distortions, develop self awareness, and regulate feelings related to trauma.”

The program emerged from a parish in Kalamazoo, Michigan, as leaders sought to address trauma in the wake of the clergy sexual abuse scandal in the Catholic Church. More than 600 people in the Diocese of Kalamazoo have completed the program, according to Catholic Extension. This program has evolved to address different kinds of trauma, Boland said.

With added training, the sisters will also learn when to refer others to seek professional help, Boland added.

On top of that, the sisters have taken courses on psychology as they work to earn degrees from St. Mary’s University of Minnesota, Boland added.

Boland said the app was created to help measure the sisters’ impact, but, in addition to that, it wound up being a “diagnostic tool about how can we support the sisters’ work in their communities.”

To Boland, it’s all about “how we as a church could be responding to the very human and real needs our people are facing.”