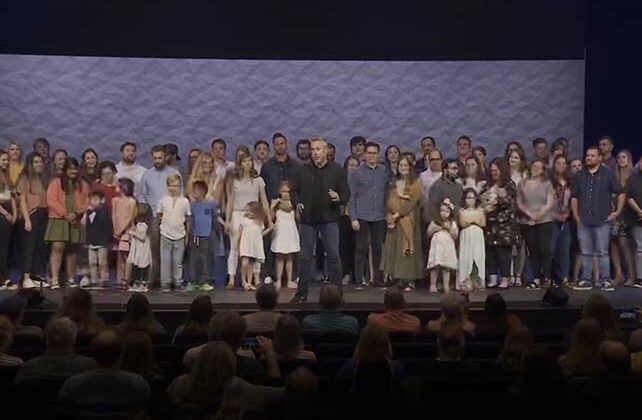 DURHAM, N.C. (BP) – With the official commissioning of its 501st and 502nd church plants, The Summit Church in North Carolina has passed the halfway mark of its goal of planting 1,000 churches in a generation.

Two new South Carolina church plants, Redeemer City Church in Greenville and Harbor City Church in Charleston were commissioned and prayed over by Summit during a service on Thursday, April 28. The planting process will begin this summer as members of the teams start relocating to South Carolina.

J.D. Greear, pastor of The Summit Church, emphasized in the service that the church’s mission involves everyone in the congregation, including some of the church’s original members and most dedicated volunteers.

“When we said in 2009 that we wanted to plant 1,000 churches, we firstly thought it was a little bit crazy, but we thought if it was going to happen it was going to be a 40-year goal,” Greear said. “Yet here we are halfway there after 12 years.”

“This is also a painful weekend for me because we believe in giving the first and the best not just of our money, but of our people to God. Looking around this stage I see key leaders, important volunteers and very good friends of my own.

RELATED: J.D. Greear: Pastor, Do You See Prayer the Way Jesus Does?

“I remember the first time we brought people on a stage like this to send people out, and I felt a sense of panic because I was looking at key ministry leaders. I remember the Holy Spirit whispering in my heart in that moment, ‘This is my church not yours, and if I’m going to take some of the very best from this church … then you’re just going to benefit from it, rejoice from it, and stand back and be amazed.’”

One of those key ministry leaders on the stage for this most recent commissioning was Jonathan Lenker, who will be the pastor of Harbor City Church in Charleston.

Lenker has been the pastor of Summit’s Brier Creek campus, but his story with the church goes all the way back to serving as the part-time custodian more than 10 years ago.

After moving to North Carolina to attend seminary at Southeastern Baptist Theological Seminary in 2009, Lenker said a friend insisted that he visit Summit.

Upon checking out the church, Lenker described what he experienced as a “movement” and said he knew it was place for him to be.

Two years later, Lenker joined Summit’s staff in two part-time roles – on the facilities team and with the student ministry.

In his position with the facilities team, Lenker spent most of his time setting up for church events, doing painting projects and cleanings bathrooms. While performing his daily tasks, his headphones would often be filled with podcasts and sermons.

Lenker said God used this time to humble his heart and set his priorities.

“I definitely thought of myself as a leader at the time,” Lenker said, “but as a part-time facilities worker there’s not a lot of speaking or leading involved, and you cannot be very proud when you’re pushing a mop around a building.

“It was definitely a blow to the ego, but it’s exactly what I needed. I think I very selfishly wanted to use God to build my own kingdom, but God brought me to a place a viewing myself as a servant and there’s a greater joy in serving the God of the universe than my own kingdom. I think the call to ministry is also a call to service.”

Now more than a decade later, Lenker is fresh off completing Summit’s church planting residency program, called The Summit Collaborative and is planning to move his family to South Carolina in the next few weeks.

A group of 45 people – 28 adults and 17 kids – will follow soon after, and the church will officially launch in September.

Lenker acknowledged the mixed feelings that come with planting a church, but also said the sense of loss is worth it for the gain in the kingdom.

“There’s a part of church planting that is a type of death, because you are sending people, and sending people feels like loss,” Lenker said.

“There is a sense in which it is a loss, but it is not a loss in a sense of subtraction but in a sense of an investment. Money that you use in an investment will over time generate far more money than spending money in a different way. That’s what church planting is like.”

RELATED: JD Greear: Here Is How to Keep the Gospel, Not Politics, First

Greear closed out the commissioning service with the same sentiment, and prayed a blessing over the teams.

“We send some of the people that we love and value the most because God promises to do more with what we give away than what we can possibly ask or imagine,” Greear said. “We believe He is going to do it again.”