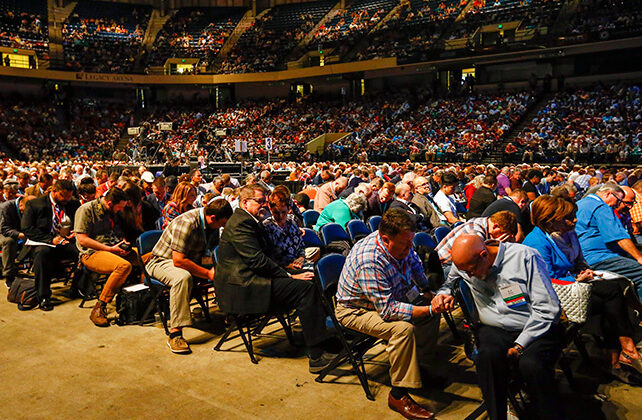 (RNS) The upcoming annual meeting of the Southern Baptist Convention promises to be a reckoning for the nation’s largest Protestant denomination.  Data released in May shows it has lost 2.3 million members since 2006. Despite efforts to beef up evangelism, a  drop in membership of 2% in 2018-2019 represents the largest single-year decline in more than a century.

This year’s meeting, the first in the post-Trump era, will also be the first since some headline-making departures from the denomination. Last month, its chief ethicist, Russell Moore, resigned. In March, bestselling author and speaker Beth Moore made waves by denouncing her membership and cutting her ties with the SBC’s publishing arm, Lifeway Christian Resources. The Rev. Dwight McKissic, a prominent Texas pastor, seems to be standing on the threshold.

In her March 5 interview with  Religion News Service, Beth Moore was blunt: “I am still a Baptist, but I can no longer identify with Southern Baptists.”

Moore is no liberal renegade. She has described herself as “pro-life from conception to grave.” And she has operated within the SBC’s restrictions on women serving in the role of pastors, despite being one of its most sought-after speakers.

But in 2016, after the “Access Hollywood” tape revealed then-candidate Donald Trump’s comments about his sexual exploits with women, Moore took to Twitter to call on SBC leaders to stand in solidarity with women against such behavior: “Wake up, Sleepers, to what women have dealt with all along in environments of gross entitlement & power,” she tweeted. “Are we sickened? Yes. Surprised? NO.”

Southern Baptists, who saw her questioning of Trump as a kind of tribal betrayal, answered with a deluge of angry criticism. Moore was further shaken by the tepid response among SBC leaders to sexual abuse in the church in the wake of a 2019  Houston Chronicle  story that documented more than 700 cases of sexual abuse in Southern Baptist churches over a 20-year period.

The denomination’s fealty to Trump, its refusal to deal with sexual abuse and its unwillingness to face squarely its legacy of systemic racism pushed Moore to the conclusion that the denomination no longer represented who she was.

In January, the Rev. Dwight McKissic, pastor of the 1,600-member Cornerstone Baptist Church in Arlington, Texas, severed ties with his state convention over its defensive repudiation of critical race theory, a body of scholarship that seeks to identify the institutional and systemic forms of racism in society.

The precipitating event was the Southern Baptists of Texas Convention’s adoption of a statement flatly condemning critical race theory as “incompatible with the Baptist Faith and Message,” the SBC’s statement of faith. McKissic has announced that he would also break with the national convention if a similar resolution is adopted this month.

Like Moore, McKissic has intimate, lifelong ties to the SBC. When asked by the Associated Press what a separation from the denomination would feel like, he responded, “It would feel like a divorce.”

But the relationship has been a  challenging one. In 2006, a former SBC executive told him that if he didn’t fall into line on SBC orthodoxy, he could “ride on the bus,” but not drive it. McKissic has also been deeply troubled at his colleagues’ loyalty to Trump, who on multiple occasions refused to flatly condemn white supremacists.

At the  2017 national convention, McKissic introduced a resolution calling on the SBC to “reject the retrograde ideologies, xenophobic biases, and racial bigotries of the so-called ‘alt-right’ that seek to subvert our government, destabilize society, and infect our political system.”

The chair of the resolutions committee publicly criticized McKissic’s resolution as “poorly written and incendiary,” and the committee refused to move it forward for a vote. After an outcry by younger pastors and the few Black messengers, a narrower resolution, composed by white leaders without McKissic’s input, was reintroduced the next day.

Emotions ran high, but it  passed. McKissic noted that, however awkward the process, its passage was heartening.

But a broader battle was brewing. In 2019, the SBC passed a measured resolution, known as  Resolution 9, acknowledging critical race theory’s valuable insights but cautioning “that critical race theory and intersectionality should only be employed as analytical tools subordinate to Scripture — not as transcendent ideological frameworks. ”

Most Southern Baptists, including McKissic, assumed that this comfortably settled the matter. But following 2020’s protests for racial justice,  Trump  brought critical race theory into the national spotlight. As the presidential campaigns were entering the home stretch last September, the president attacked critical race theory as part of a “left-wing cultural revolution.”

In November, the all-white, all-male presidents of the six Southern Baptist seminaries issued an unprecedented joint  statement, without consulting any Black leaders, that left no room for ambiguity: “We stand together on historic Southern Baptist condemnations of racism in any form and we also declare that affirmation of Critical Race Theory, Intersectionality, and any version of Critical Theory is incompatible with the Baptist Faith & Message.” McKissic called the machinations “painful to watch.”

In late December, Southwestern Seminary President Adam Greenway acknowledged the pain the statement had caused many African Americans and conceded that critical race theory “does rightly decry racism and injustice.”

However, Greenway went on to defend the exclusion of African American leaders from the process and dismissed such criticism as itself part of the critical race theory worldview. This rebuttal in the guise of an apology — a rhetorical pattern so predictable among white evangelical leaders that I have described it elsewhere as “the white Christian shuffle” — did little to mitigate the damage.

Two months later, McKissic reluctantly left the Texas Baptists, concluding: “I have decided it is time to ‘get off the bus.’ I no longer want to ride, and I certainly do not want to drive.”

The Moore and McKissic stories are symptomatic of a cultural crossroads we face as a country. Demographic changes and social upheavals of the last decades have created a climate in which every major American institution is being asked to reevaluate the norms of the past through the lenses of gender and racial equality.

In this moment of reckoning, white evangelical Protestants — the denominational family to which Southern Baptists belong — are increasingly out of step.

In  2016, nearly 6 in 10 (58%) white evangelicals, compared to fewer than 4 in 10 (39%) Americans overall, agreed that “society is better off when men and women stick to the jobs and tasks they are naturally suited for,” according to a survey by PRRI, where I serve as CEO.

In 2018, nearly half (47%) of white evangelical Protestants, compared to only 29% of the public,  disagreed  that the country would be better off if we had more women in political office.

White evangelical Protestants are even more at odds with their fellow Americans on issues of systemic racism. According to PRRI’s  2020 American Values Survey, 7 in 10 (70%) white evangelicals, compared to 43% of Americans overall, believe that the recent killings of Black Americans by police are isolated incidents rather than part of a pattern. Three-quarters (75%) of white evangelicals say they oppose the goals of the Black Lives Matter movement, compared to 41% of the public.

Only about four in ten Americans overall, and only about one-third of American young adults under the age of 30, agree with either of these statements.

In McKissic’s and Moore’s Texas, the percentage of those identifying as white evangelical has dropped from 22.6% in 2008 to 14.2% today, according to Pew and PRRI surveys.

Beth Moore and Dwight McKissic, the very archetypes of the godly woman and model Black minister, were once the much-touted proof of the SBC’s progress. They, along with Russell Moore, represent the voices that have the potential to help the SBC choose a road leading forward rather than one looping endlessly back on its past.

Each of these leaders sees the fights for gender and racial equality as connected and integral to the future of the denomination. In a letter to the SBC Executive Committee written more than a year before his recent departure, Russell Moore identified two primary areas of conflict: the SBC’s unwillingness to take sexual abuse issues seriously and racist attitudes among some in denominational leadership that undermined racial reconciliation efforts.

In the wake of the killing of George Floyd in late May 2020, Beth Moore  lamented that “the witness of the white church is marred by failing moral courage” and issued a clarion, urgent call for her fellow white evangelicals to speak up: “Why not now?”

Moore’s departure will force some difficult decisions among Southern Baptist women. In a recent interview with  Religion News Service, Beth Allison Barr, author of “ The Making of Biblical Womanhood,” noted that Moore’s exodus has likely created a shockwave that has yet to be fully felt: “If she walks away, she’s going to carry a lot of these women with her.”

The fallout from the critical race theory debate has already caused a number of other prominent African American pastors to head for the exits.  Ralph D. West, pastor of a Houston megachurch, announced he was severing ties with the SBC. W. Seth Martin, a Black pastor whose Minneapolis church sits just two blocks from where Floyd was killed, also angrily announced he was quitting the SBC. Ditto for Charlie Dates, pastor of a large African American Baptist Church in Chicago that had built an alliance with the SBC.

In an op-ed published at Religion News Service,  Dates  asked incredulously, “When did the theological architects of American slavery develop the moral character to tell the church how it should discuss and discern racism?”  West  expressed similar sentiments in The Baptist Standard: “In this time, these men chose to castigate a framework that points out a truth that cannot be denied. American history has been tainted with racism. America codified it. And more, our public and private institutions propagated it.”

McKissic is clear about the stakes at the upcoming SBC meeting:

“You’re seeing it in real time, the last fight over these matters. … And you’re seeing the pushback from those of us who say women and minorities have been misjudged and undervalued and underappreciated in SBC life. And what we’re fighting for is a seat at the table that is usually categorically denied us. … A lot of our future is riding on the upcoming SBC convention in June.”

The evidence suggests that many women, African Americans and young people are growing weary of the fight. The all-white, all-male SBC leadership can continue to proclaim their own persecuted righteousness. But if they do, many who have struggled to work within the denomination may simply respond with the two-word verdict Dates offered, quoting Harriet Tubman: “We out.”

(Robert P. Jones is the CEO and founder of Public Religion Research Institute (PRRI). He is the author of” White Too Long: The Legacy of White Supremacy in American Christianity ” and ” The End of White Christian America,” which won the 2019 Grawemeyer Award in Religion.)