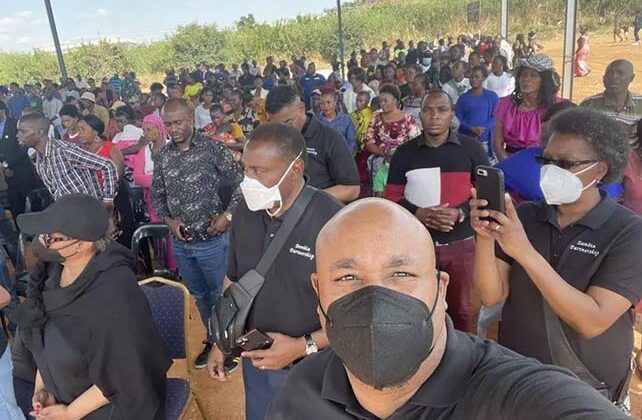 LUSAKA, Zambia (BP) – When Ricky Wilson began taking African American pastors on mission trips to Zambia in 2008, he had to dispel a myth.

“A number of the Africans have shared with us, what they were told (in the past) by the white missionaries, is that African Americans don’t care about the spiritual state of Africans in Africa. And we shared with them, a number of the African American pastors articulated that that’s not a truism,” Wilson told Baptist Press after his latest trip to Zambia.

“Because of the conflicts and issues that African Americans were dealing with in America, (we) had a lot on our hands during those times. But it’s not because people did not care, If you notice,” the earlier groups told Zambian pastors, “we brought all these pastors. That lets you know somebody must care.”

Wilson took a team of 21 African American pastors and laypersons from five states to Zambia April 22-May 6 for a multifaceted mission outreach through the Zambia Partnership in founded 15 years ago. Wilson is senior pastor of Christian Faith Fellowship in Downingtown, Pa.

RELATED: How to Plan a Group Mission Trip

A $5,000 George Liele Scholarship, an incentive launched in 2021 by the National African American Fellowship of the Southern Baptist Convention (NAAF) in partnership with the International Mission Board, helped cover expenses. Those taking the trip raised their own fare and other expenses in the two years preceding the trip, which Wilsons said amounted to $165,000.

The team held three days of simultaneous revivals at several churches, conducted pastors’ and women’s conferences and training, conducted community cleanup, held a multi-village cookout, and in advance of the trip, sent clothing and books. The partnership has built nine water wells since its founding, including two completed in 2022.

Jerome Coleman, NAAF Eastern regional director and senior pastor of First Baptist Church of Crestmont in Willow Grove, Pa., describes the George Liele Scholarship as a recognition that African Americans have always been on mission.

“Missions for African Americans starts in the community and expands from there. We take seriously Acts 1:8, ‘and you will be my witnesses in Jerusalem, and in all Judea and Samaria, and to the ends of the earth,’” Coleman told Baptist Press. “From South Carolina, to Georgia, to Jamaica, Liele embodied what it is to be a witness for Jesus.

“We are godly proud that Liele has finally been recognized, not only as the first American missionary, but if William Carey is considered ‘the father’ of the modern missionary movement, then George Liele is ‘the grandfather,’ since he left America and preached the Gospel in Jamaica 10 years before Carey left England for India.

“We are overjoyed that, along with Annie Armstrong and Lottie Moon, (Liele) is now on the pantheon of SBC missionaries.”

Larry Anderson, director of church health and evangelism for the Baptist Resource Network of Pennsylvania/South Jersey (BRN), traveled to Zambia for the first time this year after making other mission trips to Africa.

The Zambians he ministered to considered themselves blessed to be able to worship the Lord irrespective of any wealth, Anderson said, with praise and worship lasting 45 minutes before the sermon was preached.

“It impacted me in a major way,” Anderson said, “in regard to the appreciation of the Lord and the worship of the Lord that wasn’t (based) on materialism. These folks were blessed. They were willing to worship and praise the Lord for hours. And they may have 10 percent of the materialism that we have here in America.

RELATED: Are Short-Term Mission Trips a Waste of Time and Money

Anderson, who co-authored with Kyle Canty the book “Ask Me Why I’m Not in Church,” conducted a workshop on reaching the community. In preparation, he sent 100 copies of the book to Zambia in 2020, when the trip was delayed by the COVID-19 pandemic, and conducted a survey months in advance of the trip about the needs of the communities pastors serve there.

“Based on that, we went over with workbooks, with T-shirts and we created a ‘Ask Me Why I’m Not In Church’ evangelism plan and strategy for those pastors,” Alexander said. “They were so appreciative.

“The shirts are meant to be thought-provoking. One of the pastors walked right out of the conference, got into a rideshare, somebody asked him why wasn’t he in church, and he shared his faith, and this guy accepted Christ. That was the highlight.”

Wilson is working to expose other African American pastors to missions on the continent of Africa.

Zambian pastors appreciate meeting pastors on mission who share their skin color, Wilson said. He and another pastor visited Zambia a year in advance of the trip to plan the outreach conducted April 22-May 6.

“One of the things that we found enjoyable in dispelling the myth of African Americans’ absence in Africa, is that we were poisoned against what life is like in Africa,” Wilson said. “But if a person has never been there, you really can’t say what it is.

RELATED: Four Reasons Why You Should Consider a Family Mission Trip

A.K. Malemba, pastor of the multisite Moving Gospel Ministries Inc. in Zambia, served as the central host pastor. In the 15 years that the Zambia Partnership has taken mission trips to Zambia, Wilson said, Malemba has planted 21 churches and leads a network of 31 congregations.

RELATED: Ten Things That Your Missionary Will Not Tell You

The Liele scholarship is primarily funded through the approximately 4,000 congregations comprising NAAF, Coleman said, with additional funding from IMB and other contributors.

“The hope is that as awareness of the scholarship increases, funding from IMB, NAAF, other SBC churches, and other contributors will increase as well,” Coleman said. “We would love to get matching funds, an individual, group, entity, or church that would match the dollars that are contributed each year so that we can increasingly achieve the scholarship’s goal of reflecting the diversity of the Southern Baptist Convention by mobilizing and sending African American missionaries around the globe to reach a diversity of people groups with the Gospel of Jesus Christ.”