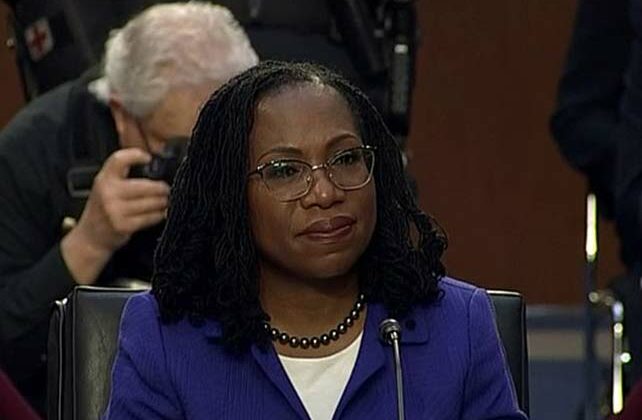 The evenly divided Senate voted 53-47 for Jackson’s confirmation to the Supreme Court, with three Republicans joining all Democrats in support of the federal appeals court judge. She will replace Associate Justice Stephen Breyer upon his retirement when the high court adjourns this summer.

Confirmation for President Biden’s first nominee to the Supreme Court came despite opposition from every GOP member except Sens. Susan Collins of Maine, Lisa Murkowski of Alaska and Mitt Romney of Utah. Some Republican opponents expressed disagreement with her judicial philosophy or her sentencing decisions in child pornography cases. Pro-life advocates expressed concerns about her anticipated rulings on abortion rights.

Jackson’s confirmation apparently will not change the ideological makeup of the high court, which is normally considered to have a 6-3 division in favor of conservatives. Breyer was typically aligned with liberals on the court. Biden’s selection of Jackson and assessments from both sides of the political aisle have helped prompt the assumption she also will be part of the liberal wing.

“Despite the philosophical and legal differences individuals like me will have with her, Judge Jackson’s confirmation is a history-making moment,” said Brent Leatherwood, acting president of the Southern Baptist Ethics & Religious Liberty Commission. “We should appreciate it as such. If we lose the ability to do that, we lose something that makes America an exceptional nation.”

In written comments, Leatherwood said he prays “that as she joins the nation’s highest court, she will decide cases about human dignity, religious liberty and protection of the family based on the fundamental principles of our country.”

Jackson, 51, will become the fourth female justice on the Supreme Court when she succeeds Breyer, marking the first time it has had that many women at the same time among its nine members. She will join Associate Justices Sonia Sotomayor, Elena Kagan and Amy Coney Barrett. Jackson will be the youngest current justice except for Barrett, 50, who was nominated by President Trump in 2020. She also will be the sixth female justice in the high court’s history, joining the current members and previous justices Sandra Day O’Connor and the late Ruth Bader Ginsburg.

A judge on the District of Columbia Circuit Court of Appeals, Jackson becomes the third African American confirmed to the Supreme Court. She joins the late Thurgood Marshall, who served as an associate justice from 1967 to 1991, and current Associate Justice Clarence Thomas, who has been on the court since 1991.

Majority Leader Charles Schumer of New York told the Senate before Thursday’s vote the “milestone should have happened generations ago,” but today it is “taking a giant step toward making our union more perfect.”

“Judge Jackson has the temperament, the acumen, the skill and the kind of attributes we demand from a Supreme Court nominee,” he said. “She is dedicated to protecting judicial independence, to advancing freedom and liberty, and to making the court, its work and its decisions accessible to all Americans.”

In explaining his opposition, Republican Sen. Ben Sasse of Nebraska said March 25 after the Judiciary Committee hearing concluded he is “sadly unable to vote for this confirmation.”

Originalism seeks to interpret the Constitution based on its original meaning and to analyze laws according to their text.

South Carolina Sen. Tim Scott, the lone black Republican in the Senate, said in an April 4 statement, “The historic nature of Judge Jackson’s nomination reinforces the progress our country has made. However, ideology must be the determining factor – not identity – when considering such an important lifetime appointment. It is clear that Judge Jackson’s judicial philosophy and positions on the defining issues of our time make her the wrong choice for the Supreme Court.”

Some Republicans on the Judiciary Committee criticized Jackson for issuing sentences in child pornography cases that were more lenient than federal guidelines. Jackson defended herself, saying federal law calls for a judge to consider other factors as well to determine a punishment sufficient for the offense.

Though Jackson has not issued an opinion in an abortion case, some organizations on both sides of the issue have demonstrated by their comments they expect her to be supportive of a right to the procedure. As a member of a Boston law firm in 2001, Jackson and other lawyers filed a friend-of-the-court brief in support of a Massachusetts law that established a moving “buffer zone” around people and cars nearing abortion clinics, according to SCOTUSblog.

Before the confirmation roll call Thursday, senators voted 53-47 to invoke cloture, an act that limited debate and prevented Republicans from filibustering the vote to confirm Jackson. Collins, Murkowski and Romney joined Democrats in the majority.

The Judiciary Committee, which is split evenly by political party among its 22 members, deadlocked 11-11 in its April 4 vote to forward Jackson’s nomination. The full Senate, however, approved in a 53-47 vote later that day a petition to discharge her nomination from the committee. Senators voted the same way they ultimately did Thursday to invoke cloture and confirm Jackson.

The American Bar Association’s Standing Committee on the Federal Judiciary told Judiciary Committee leadership in a March 18 letter it unanimously found Jackson to be “Well Qualified” for the Supreme Court.

Biden had pledged during the 2020 presidential campaign he would select a Black woman for the high court.

Jackson served as a clerk for Breyer during the high court’s 1999-2000 term. Breyer will have served nearly 28 years upon his retirement.

President Obama nominated Jackson as a federal judge in the District of Columbia, and the Senate confirmed her in 2013. Selected by Biden last year for the D.C. Circuit Court, Jackson received a 53-44 vote for confirmation in June. Three Republicans – Sens. Lindsey Graham of South Carolina, Collins and Murkowski – joined the Democrats to confirm her.

After graduating from Harvard Law School in 1996, Jackson served in a variety of public and private roles. These included service as a federal public defender in Washington, D.C., for two years and a stint as a staff member of the U.S. Sentencing Commission and another as vice chair of the commission.