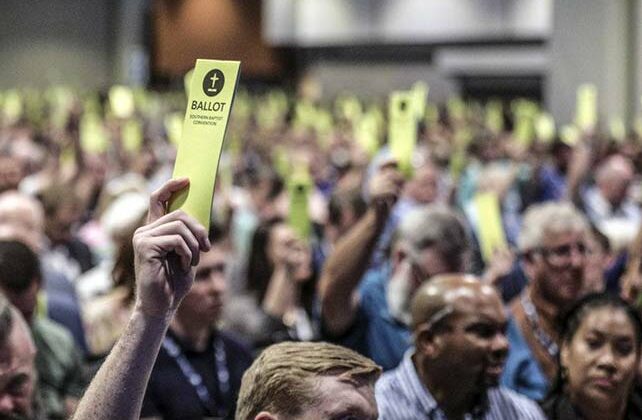 NASHVILLE (BP) – A leaked copy of a Supreme Court opinion that would essentially overturn 1973’s Roe V. Wade decision has prompted Southern Baptists to reflect on their pro-life history.

The draft was originally published by Politico and was later confirmed to be authentic by Chief Justice John Roberts in a press release issued by the Supreme Court.

The leaked document suggests the SCOTUS is set to overturn not only the 1973 Roe v. Wade decision, but also 1992’s Planned Parenthood v. Casey decision. Overturning these decisions would essentially return the determination of abortion law to state-level governments.

Brent Leatherwood, acting president of the Ethics & Religious Liberty Commission (ERLC), called the leak of the SCOTUS draft “the most consequential leak of our lifetime,” in a first-person piece released this week.

He said if the decisions are in fact overturned, it would be an incredible step in developing “a culture of life.”

“Overturning the Roe-Casey precedents will mark massive progress toward this goal as the jurisprudence stemming from these cases has been the number one factor inhibiting pro-life laws from taking effect,” Leatherwood said.

“It will mark a hopeful and substantial step toward establishing a true culture of life in our nation by giving states the freedom to pursue policies that protect preborn children. Christians should be in earnest prayer for such a moment.”

Leatherwood referenced an SBC Resolution from 2003, ‘On Thirty Years Of Roe V. Wade,’ which called for not only overturning Roe v. Wade, but striving for a society that would consider the act of abortion “unthinkable.”

“RESOLVED, That we pray and work for the repeal of the Roe v. Wade decision and for the day when the act of abortion will be not only illegal, but also unthinkable.”

Leatherwood said the potential overturning of Roe v. Wade will hopefully serve as a step in that direction for society.

“This leaked draft opinion would indicate we are closer than we have ever been to that reality,” Leatherwood said. “When that day is upon us, we will enter a time when the inherent rights of life, liberty, and the pursuit of happiness are finally extended to our most vulnerable neighbors.”

In 1980, they took on the challenge of legalized abortion on demand for the first time. They were resolved saying, “That we abhor the use of tax money or public, tax-supported medical facilities for selfish, non-therapeutic abortion,” calling “for appropriate legislation or a constitutional amendment prohibiting abortion except to save the life of the mother.”

More recently, the convention based a 2015 resolution on the sanctity of human life, and in 2021 passed two resolution on both abolishing abortion and on taxpayer complicity related to The Hyde Amendment.

Bart Barber, chair of 2022 SBC Committee on Resolutions, said the committee had already been working on a resolution calling for the repeal of the Roe v. Wade decision before this week’s news, and will now be reworking that resolution in case the opinion reflected in the leaked draft becomes finalized.

“Southern Baptists have long stood for and been united around the sanctity of every human life, including the preborn,” Barber said in a statement.

“The Committee on Resolutions was already working on a resolution asking the Supreme Court to reverse the disastrous Roe v. Wade decision. The things we have learned in the past 24 hours have given every member of this committee an even greater hope that American jurisprudence will soon make a giant leap forward toward recognizing the right to life of the preborn.

“We are now working to revise the resolution that we had already begun to draft in such a way as to celebrate the final opinion in Dobbs—an opinion that we hope maintains the strength and clarity of the draft we’ve seen—to give thanks to God, and to envision the task before us as the Roe regime fades away into the annals of history. Southern Baptists long for the day when the dignity of every human life is celebrated and we redouble our ongoing efforts to care for vulnerable women and children throughout our communities.”

Southern Baptists meet for the 2022 SBC Annual Meeting in Anaheim on June 14-15.

Chelsea Sobolik, director of public policy for the ERLC, said the potential overturning of Roe will serve as an opportunity to step into people’s lives with the Gospel.

RELATED: 3 Realities for Christians to Consider if Roe Is Overturned

“For decades the SBC has stood for the most vulnerable among us and longed for the day when our laws will also protect the pre-born, and it’s becoming increasingly clear that the highest Court in the land could vote to send the issue of abortion back to the states, allowing them to make their own decisions regarding abortions,” Sobolik said.

“I pray that Christians throughout the country will continue to love and serve women and children, and point to the hope of Jesus.”