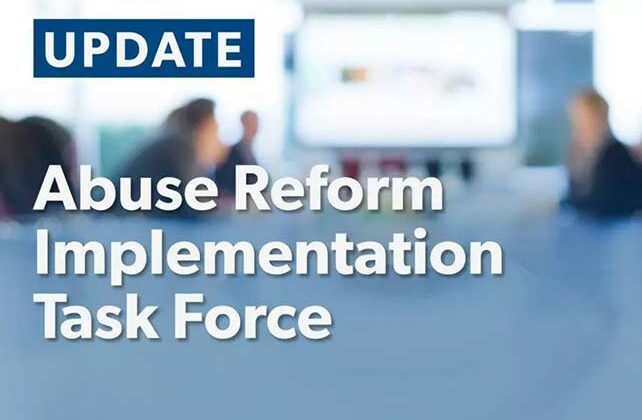 NASHVILLE (BP) — The work of a yet-to-be-appointed Abuse Reform Implementation Task Force (ARITF) is likely to take years, with an initial report ordered to be given at the 2023 Southern Baptist Convention Annual Meeting in New Orleans next June.

Marshall Blalock, vice chairman of the Sex Abuse Task Force (SATF) that recommended the new group, said guidelines are in place to allow as long as three years for some of the work.

“We anticipated it would take the implementation task force at least one year, maybe two years, and on the outside maybe three years,” Blalock said. “We’re hoping this next year is extremely productive and that (SBC) president (Bart) Barber is able to have a task force that’s ready to go to work and understands its responsibilities and can see some of these things move at a good pace.”

Barber expects to name the members of the task force by the end of July after a debriefing by the SATF, he tweeted from his Farmersville, Texas, farm June 22.

“After that’s all finished, then I’m going to be moving forward quickly to name the members of this task force and get them started. I expect that I’ll have that done before the end of July, because it’s just going to take some time to process through what the task force tells me and to turn that into recommendations for people to serve,” Barber said. “Pray for me, because this is going to be one of the most important things I do this year.”

The new implementation task force, as approved by messengers, is authorized to work for one year, with the term renewable annually as needed.

“We originally were thinking that it was going to take longer than a year because we’ve had nine months, and we just got started in some respects. But we don’t know how long it will take,” said Blalock, senior pastor of First Baptist Church of Charleston, S.C. “And one of the good things that we’ve already learned is that many of our state conventions are already acting on some of the (challenges and requests) we have made. And the local church and the local associations and the local Baptist conventions, that is the state convention, (have) a more grassroots ability to help affect things at the local level.”

The SATF hopes, Blalock said, that local associations, churches and state conventions will help create a culture that enables people to prevent sex abuse, policies that prevent the crime, a system that provides care and help for abuse survivors, and a society where sex abuse is no longer tolerated.

“We hope that happens at a grassroots level,” he said. “There’s no way to know how long that part will take, but what we’re seeing so far is really good progress.”

The implementation task force is charged with work the SATF clearly delineated in its two recommendations approved by messengers to the 2022 SBC Annual Meeting in Anaheim, with the added stipulation that the new task force adheres to “best practices in keeping with Southern Baptist church polity.”

The implementation task force is to:

— Study the Guidepost recommendations for feasibility and bring an initial report to the 2023 annual meeting on which reforms could be adopted by the convention and how they should be implemented, including Guidepost’s recommendations for a survivor care fund and a memorial, auditing the Caring Well curriculum, and the possible creation of a permanent committee or entity.

— Assist SBC entities in studying the recommendations from Guidepost and provide advice on voluntary implementation of reforms relevant to each entity’s ministry assignment.

— Serve as a resource in abuse prevention, crisis response, and survivor care to Baptist bodies who voluntarily seek assistance. Such assistance may include providing a list of recommended independent, qualified firms for training and inquiries and will include assisting state conventions with any of the recommendations each chooses, as the state conventions request.

— In consultation with the Credentials Committee, revise the evaluation and submission process for complaints of noncooperation due to sexual abuse and publish those revisions. For example, when a church acts in a manner that is inconsistent with the Convention’s beliefs regarding sexual abuse, such as showing an unwillingness to cooperate in an inquiry of an accused individual, then the church shall be submitted to the SBC Credentials Committee for consideration in accordance with SBC bylaw 8.

— Work with the SBC Executive Committee and Credentials Committee to select an independent, qualified firm or firms to assist the Credentials Committee by providing factual findings for complaints of noncooperation due to sexual abuse. The (Abuse Reform Implementation Task Force) will report back any actions to the 2023 annual meeting regarding this selection. This expense shall be funded by the sexual abuse reform allocation.

In addition, messengers ordered the implementation task force to, in coordination with the SBC Executive Committee, create a Ministry Check website to publicize, and a process to maintain, a record of “pastors, denominational workers, ministry employees, and volunteers who have at any time been credibly accused of sexual abuse and who have been or are associated with a cooperating Southern Baptist church or entity.”

The SATF made its recommendations after receiving Guidepost Solutions’ report of its independent investigation of the Executive Committee’s handling of sex abuse complaints spanning 2000-2021. Guidepost, in its lengthy report following a months-long investigation, recommended several changes to the SBC. The implementation task force might not recommend to 2023 messengers all of the recommendations Guidepost Solutions included in its report, Blalock said.

“Guidepost sent us a long list of recommendations, some of which probably don’t work out with the way we govern ourselves as Baptists,” Blalock said. “But there may be some information there that the new reform implementation group finds and says this is a step we believe is right to take and they may bring those recommendations to New Orleans in 2023.

“We didn’t give them any particular priorities, we just said look at all of these and then see what can be done next year, if anything needs to be done next year,” Blalock said. “What we hope happens is the two recommendations that we’ve got in place now, that they can make sure that those actually become reality. We voted on it. We all agreed to it. Now, that group’s got to help find the right people to put it in place and help work with the Executive Committee to see that it’s done.”

The implementation task force’s work will be extensive and would benefit from a full-time staff person devoted to the task, Blalock said, emphasizing one of several proposals the SATF made as “requests” accompanying the report’s two recommendations approved by 2022 SBC Annual Meeting messengers.

“That’s one of the requests we made, that the Executive Committee would actually hire someone, that that is their main focus at least for the next two or three years. And someone who’s trained in understanding trauma of sex abuse and who understands the legal realities of it, understands the process of how to help prevent it,” Blalock said. “That’s someone on the staff at the EC who’s able to sort of guide that effort and work with the Credentials Committee as a staff helper.”

The SATF made several requests of state conventions, SBC entities, and other related Baptist bodies, forming them as suggestions since the bodies are ruled by individual boards of trustees rather than SBC messengers.