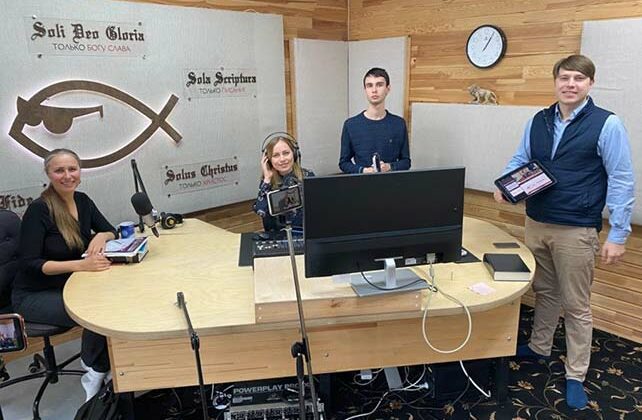 ODESSA, Ukraine (BP) – While the people of Ukraine watch and wait for a potential Russian invasion, an evangelical Christian radio station called “New Life Radio” is continuing its ministry during the crisis.

After more than 20 years of operation in Russia, New Life Radio moved to Odessa, Ukraine, several years ago in response to increasingly restrictive Russian laws. With the current threat of Russian military invasion, the station is preparing for another potential move of its headquarters.

“The importance of Christian radio is we can ensure Russian-speakers get solid biblical teaching and sound doctrine in a way that sort of overcomes their inability to currently get it,” Johnson said.

“If the evangelical church is stopped by the government from evangelizing and doing public discipleship, what’s the next vehicle that could help accomplish that? Christian radio.”

Johnson moved from the U.S. to Russia in the early 1990s to start a Christian radio station in partnership with a group of Russian Christians.

After a years-long process, New Life Radio was launched as an FM station broadcasting from Magadan, Russia, to communities all across the country. It was the first Christian FM radio station in the history of the country.

New Life expanded its reach through the use of satellite radio, enabling the station to broadcast nationwide in Russia, as well as in several surrounding Russian-speaking nations.

Eventually, through the use of internet radio, the station gained the ability to broadcast around the world. The broadcast is free due to the financial support of donors and ministry partners. The group responsible for supporting the New Life broadcast is called “Christian Radio for Russia.”

Johnson returned to live in the U.S. in the early 2000s but continues to serve as an organizer for both organizations and communicates daily with the station’s production team overseas.

He said Russian laws in the early ‘90s allowed more media freedom, making it “the best time to start Christian radio.” From the beginning, Johnson said all of the station’s content has been focused on communicating biblical teaching to Russian Christians.

“The Russian Church is woefully malnourished in their understanding of the Scriptures, so our first priority is communicating the Scriptures,” Johnson said.

“The challenge for our radio station is to teach the whole plan of God to our listenership, which includes understanding Genesis to Revelation. Ultimately the best information you can put on Christian radio are the Scriptures.”

Johnson described the content of the station as 65 percent music that “biblically teaches” and 35 percent Scriptural content and expository preaching.

For the music, the station originally played songs mostly in English because there was hardly any available Christian music recorded in Russian, but now broadcasts a great deal of Russian musical content.

Over the years, station leaders began to better understand the lack of theological knowledge among Russian Christians, which caused them to double down on the importance of communicating biblical truth, whether through song or Scripture.

“We had to shift our focus to more becoming like a seminary of the air,” Johnson said.

“Teaching the Scriptures and raising up people who then become disciplers in their own communities is our goal. This strengthens the local church community by community across Russia.”

Johnson said New Life’s team has seen the impact of the station grow as the reach of the broadcast expands. While letters and support from fans are wonderful, he said, the team’s motivation is to steward well the responsibility of being the first Christian radio in the country, regardless of any tangible impact or feedback.

“I think God gave us the privilege of being the first to do it, simply because we knew there was a need and we went in there to try to meet the need,” Johnson said.

“But at the same time if you’re the first at something, people look at you and you have to constantly be an example of doing things right, and that’s a constant challenge for us. Our format has to reflect the best in Christian radio. If you’re true to God’s Word, the reputation of your broadcast will be apparent to all.”

Even before the current crisis, New Life has faced its share of challenges and adversity.

During the presidency of Vladimir Putin, laws affecting both the freedom of Christian evangelism and the freedom of media increased gradually, threatening a shutdown of the station’s headquarters in Magadan.

These restrictive laws prompted the move to the Ukraine, where the laws allow much more freedom for media.

Now facing another relocation, Johnson said moving would simply be a matter of packing up the station’s bags and driving several hours across the border to Moldova. The team would then begin to evaluate the permanence of the move and how to proceed.

Johnson asked American Christians to pray not only for New Life, but also for the nations of Russia and Ukraine as a whole.

“The first thing I think people can pray for is peace between these two countries because with peace everything else is possible,” Johnson said. “Pray that God would intervene in the lives of these two people groups. Pray for the political leaders in Russia, Ukraine and America.

“Additionally, pray that the Russian government would relax the laws against the Church, and pray for the existing ministries like us that are able to do work across Russia and Ukraine.”

More information about New Life Radio can be found at Christian Radio for Russia’s website.