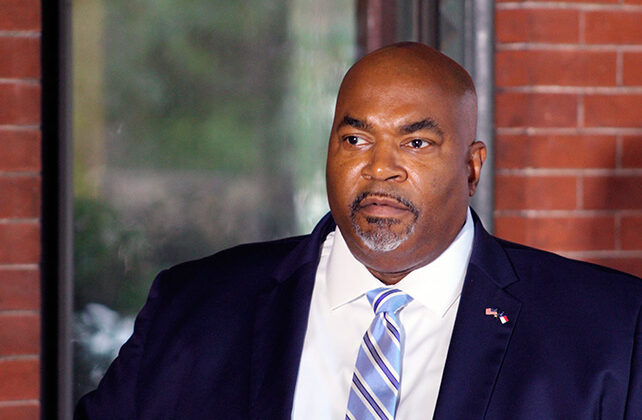 Robinson held a news conference to respond to criticism earlier in the day from Democrats, including three LGBTQ lawmakers. He pushed back on calls from some Democrats and LGBTQ groups for him to resign and said he could separate his personal views about sexuality and spirituality from his daily role as the state’s highest GOP executive officeholder.

Robinson reiterated his assertion that his remarks in June were intended as a critique of reading materials available within the state’s public school system rather than an attack on the LGBTQ community.

But Rep. Marcia Morey, a Durham County Democrat, criticized Robinson’s efforts to shift the discussion away from his past statements and toward books offered in some public school libraries.

“This is a bait-and-switch. I think this started out by a video that was in a church, and it was disgusting,” Morey said at a morning news conference with two other LGBTQ members of the state House. “Now, it has pivoted to what kids are reading in schools. These are really two different issues, and I think we all want good solid literature for kids to read, but don’t conflate this with the words of hate and filth that sparked this entire debate.”

Rep. Allison Dahle, a Democrat from Wake, fought back tears as she said that it’s been difficult and deeply personal to process Robinson’s comments.

“When you live in a place where you’re pointed out as something not good, it’s really hard to process that,” she said, adding: “Processing can be really difficult because coming out is not just a one-time thing. It can be every day, and it can be over and over again even if you’re out and proud.”

The state’s Republican leaders have refused to criticize Robinson after a video surfaced last week of him telling Asbury Baptist Church attendees in June, “There’s no reason anybody anywhere in America should be telling any child about transgenderism, homosexuality, any of that filth.”

In a statement shortly after Robinson’s news conference, Republican House Speaker Tim Moore stood by Robinson’s clarification. He condemned those who have threatened Robinson over the June comments but did not speak out against a number of anti-LGBTQ views Robinson has espoused over the years.

“I am confident that we can work together with greater respect for our neighbors even in the most passionate political debates,” Moore wrote.

Asked about the litany of past Facebook posts he has written about the LGBTQ community before he was elected last year, including a view he expressed in 2017 that “You CAN NOT love God and support the homosexual agenda,” Robinson discussed the need to remove highly sexual material from school libraries.

Anderson is a corps member for the Associated Press/Report for America Statehouse News Initiative. Report for America is a nonprofit national service program that places journalists in local newsrooms to report on undercovered issues.