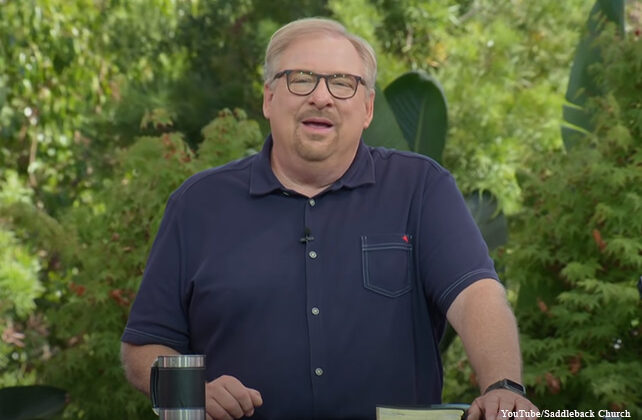 For 42 years Pastor Rick Warren has served as the lead pastor of Saddleback Church, but this weekend he announced to all 15 Saddleback locations in the United States and four international locations that he and church elders will begin searching for his successor.

Pastor Rick Warren: ‘Timing Is Everything in Life’

In a video that was aired at every campus this past weekend, Warren told those watching that, “Timing affects everything we do in life. It can mean the difference between success and failure, and we can only serve God with the time that he gives us in the times that he puts us in.” Warren pointed to Ecclesiastes 3:1 as he explained that there is a right time appointed for everything and there is a right time for every activity.

We don’t just do everything God wants us to, The Purpose Driven Life author said, but also “We are to do it at the right time.” Warren emphasized that “timing is everything in life.”

Warren quoted Acts 13:36, one of his life verses, sharing that it has guided him for the 51 years he’s served God in ministry. “David served God’s purpose in his generation, then he died…That statement is the definition of a successful life,” Warren said, adding he hopes that is what people will say about him when he is no longer on this earth.

“God has given me the privilege of serving not just one generation…but multiple generations.”

Warren explained that an email sent to Saddleback Church registrants over the weekend  announced an official search for Warren’s successor will begin this week. “That’s a big deal,” he said. Warren has been the only lead pastor for Saddleback in 42 years of ministry, which started when he was 26-years-old.

Referencing God’s perfect timing, Warren said, “For 42 years, Kay and I have known that this time, this day would eventually arrive, and we’ve been waiting on God’s perfect timing to begin the process of finding our next lead pastor.” This process will allow Pastor Warren to smoothly transition into a lesser role as founding pastor of Saddleback Church.

Warren referenced a survey stating that a pastor within the American church stays at a church for just 3.6 years before moving onto another church. He then recalled his first sermon at Saddleback in 1980, where he made the commitment to God and the congregation to give at least 40 years of his life to “growing the people of the Saddleback Church family.”

God made it clear to Warren right before the pandemic that after fulfilling his 40-year commitment, it wasn’t yet time to step down. Three weeks after celebrating Saddleback Church’s 40th anniversary, the pandemic hit, shutting down in-person services for over a year. This would have been not only hard for a new pastor at Saddleback Church to navigate through, Warren said, but probably impossible to hold the Saddleback Church family together. After COVID-19 restrictions began to lift, the Warrens knew it was the proper timing to start looking for Warren’s successor.

“We don’t know all the details,” Warren said, “You don’t have to see the top of the stairs to take the first step.” He added that God’s timing will allow the leadership team to take one step at a time.

During his video address to the congregation, Warren answered some questions that had been given to him. One of those questions asked whether he had a successor in mind. “No, we don’t,” he answered simply, and said the team is starting the process with no preconceptions. He said Saddleback Church leadership will look inside the church and outside it for possible successors who are already doing some type of “purpose-driven ministry.”

“What’s the number one qualification that you’re looking for in a pastor?” another questioner asked. Warren said, “That’s real easy. Someone that will love you as much as I’ve loved you. Someone who’s willing to sacrifice their life, for your benefit, as a good shepherd…I will not allow anyone to become the pastor of this church who doesn’t love you as least as much as I do.”

It’s unknown how long the process will take, Warren he said as he answered another question, adding that there is no timetable.

Saddleback Church elders will lead the process and make the final decision, Warren said. “The elders are in charge of the direction of our church and they will select a task force of members.”

‘One of the things I want to be able to do is spend more time encouraging the leaders at each of our campuses,” he said. Adding that he occasionally plans to teach, he said he looks forward to preaching less. “It takes an enormous toll to do three, four, five, six…[or more] services,” Warren said.

The pastor gave threes reasons for beginning the search now. First, he said it was time for a younger leader who had more energy, new vision, and fresh ideas to lead the next generation and that to undertake that effort during the pandemic would have been a mistake. Secondly, Warren said now the pandemic is waning and the church has a worship center slated to open in the fall, allowing a great opportunity to develop a new leader. The third reason for timing that Warren gave was his health.

“I would like to ask you to pray…Most of you know I was born with a physical condition that has been a thorn in my flesh for 50 years of ministry,” Warren said. He explained that the rare neurological condition called Spinal Myoclonus causes him to shake in a way similar to Parkinson’s patients when adrenaline floods his brain. His condition causes his vision to get  blurry when he preaches, making it hard to see his notes, and it gives him painful headaches.

“I don’t love to preach. I love the people I preach to.”

As Warren closed his message, he asked everyone to pray for the Saddleback Church family.

Just a few weeks prior to Warren’s announcement, Saddleback Church landed on the Southern Baptist Convention (SBC) leadership’s radar after they ordained three female pastors for the first time in their 42 years of ministry. Saddleback Church is a member of the SBC.

SBC President J.D. Greear responded to the newly ordained female pastors by saying “While I have long respected Saddleback’s ministry impact and heart for getting the gospel to the nations, I disagree with their decision to take this step, and would even say I find it disappointing.”

You can watch the Reich Warren’s full message below: