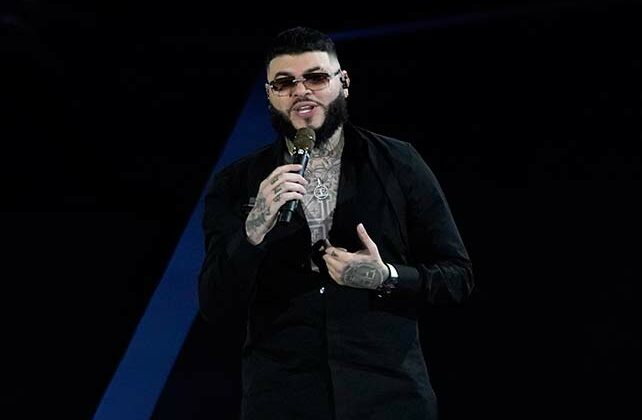 But Farruko refused to sing the song in full, leaving out rousing choruses about taking drugs and partying, and apologizing for those lyrics. He spoke profusely about God throughout the concert and lit a cross in neon pink, leaving fans stupefied and questions swirling around the future of his music career.

The Puerto Rican singer is not the first artist to make a dramatic transformation, but this one seemed to happen on stage in real time last Friday, catching fans off guard. Some had paid more than $300 for tickets, and many walked out well before the show was over.

Despite rumors of Farruko’s retirement, his tour is scheduled to go on, with performances planned for Newark, New Jersey; Cleveland; and Rosemont, Illinois, this weekend, but fans are confused, with some taking to social media to say his show was “trash,” and others comparing it to Sunday service. Farruko said he will continue performing his hits but with a “message of love, union and reflection.”

“The time will come when the sermon you are complaining so much about now will help you,” he said in an Instagram video Wednesday, adding that the show in Miami was all his doing. “Artists are free to express themselves on stage as they wish.”

His new persona also has drawn support, with some fans leaving posts of appreciation on Instagram. Fellow Puerto Rican Reggaeton artist Tito El Bambino wrote in Spanish: “I love you. I am proud of you. Don’t stay quiet and keep talking.”

Farruko told fans at last Friday’s concert he realized he had all the money he wanted. He had success with a single peaking at No. 25 on the Billboard Hot 100 last October and remixes released by David Guetta and Tiesto.

But he felt empty.

He told fans he had “destroyed” his family and was unable to see his kids as much as he wanted. Farruko also has run into legal problems. In 2019, he pleaded guilty to not declaring nearly $52,000 in cash discovered in his luggage and shoes when he arrived in Puerto Rico by helicopter from the Dominican Republic.

“Farruko had an encounter with God, the Father, who made him reach deep inside,” he said in recorded footage of the concert, speaking of himself in third person. “I was inviting people to take a pill and act happy and live a crazy life. You know what? I am not proud of myself. God knows how many of your children I’ve harmed. Today I am here, standing like a man asking for you to forgive me.”

Noelia Croft of Chicago said she paid $120 for her ticket to the upcoming concert in a suburban theater but now wants a refund. Born and raised in Puerto Rico, and also from Farruko’s hometown of Bayamon, Croft said she’s long been a fan.

“I was disappointed,” Croft said. “People paid to hear his music, not a sermon or him preaching. He wants to be a man of God? That’s fine, but that’s not how he advertised his concert.”

Croft said she now wonders if the Reggaeton singer had planned this before the tour, but wasn’t upfront about it for fear of influencing ticket sales. Farruko has told fans they can get a refund if they want, but Croft said she hasn’t heard about how to request one.

Farruko’s publicist said he was not granting interviews at the moment.

Katelina Eccleston is a music historian who writes about the genre on her internet platform Reggaeton con la Gata. She said “Pepas” exploded in popularity not because it’s about drugs but because it has a unique sound blending electronic dance music with guaracha, a popular Cuban music style. It came out just when people were tired of lockdowns, event cancelations and travel restrictions.

“It is just so full of energy, and it came at the right time,” she said.

Eccleston said Farruko is preceded by other Reggaeton artists who left their careers for religion, such as El General, a Panamanian artist who is considered the pioneer of the genre, and Hector El Father, a Puerto Rican singer who is credited for paving the way for artists such as Daddy Yankee and Don Omar. Those two artists, however, ended their music careers.

“If he wants to continue on tour, sing the music and hopefully take moments to speak, that is OK. But maybe not too long,” Eccleston said. “There’s an intelligent way to go about this.”