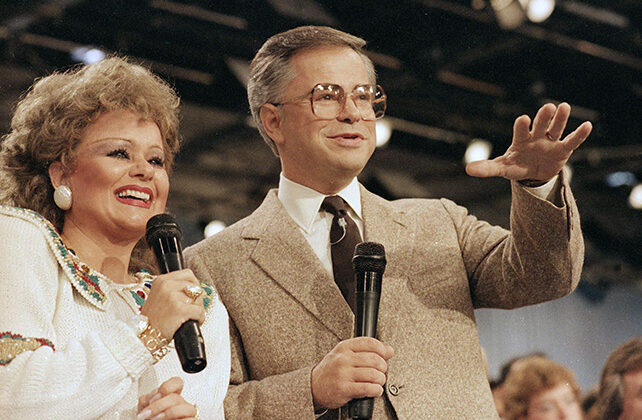 (RNS) Tammy Faye Bakker’s story has been told in countless television interviews, as the punchline in “Saturday Night Live” skits and in a number of musicals.

Now it’s one step closer to getting the Hollywood treatment.

People Magazine has released the first photos of Andrew Garfield and Jessica Chastain as famed TV evangelists Jim and Tammy Faye Bakker in the upcoming film “The Eyes of Tammy Faye.”

One picture shows the actress, who won an Oscar for her role in “Zero Dark Thirty,” alongside Garfield in what appears to be a re-creation of the Bakkers’ 1987 interview with “Nightline.” The live interview was the couple’s first after leaving the PTL (Praise The Lord) television network amid a sex scandal involving Jim Bakker and another woman — what anchor Ted Koppel described at the time as a “national soap opera.”

Another shows her clutching a microphone, one hand raised, as Garfield, who also starred in the religious drama “Silence,” looks on, a longhaired cat in his lap.

“The Eyes of Tammy Faye” is produced by Chastain, who told People she was moved by Tammy Faye Bakker’s story after watching the 2000 documentary by the same name. Chastain spent a decade researching the televangelist, who became an unlikely gay icon.

“I just was so blown away by her and her story,” Chastain told the magazine.

“The thing I loved the most about Tammy is her capacity to love. She knew what it felt like to not feel important, and she didn’t want anyone to experience that.”

The caricature of Tammy Faye Bakker she had known — with mascara streaming down her face — didn’t necessarily fit who she actually was, Chastain said, “making her into a clown and punishing her for the mistakes of her husband, which all throughout history women have been the victim of, atoning for the sins of men.”

On Wednesday, the actress posted several of the photos on her Instagram page alongside a caption recalling a video she had seen of Tammy Faye Bakker. In the video, the televangelist sang a song, then turned to the camera and said, “God loves you just the way you are.”

“I’ve never been baptized. I didn’t grow up within a church, but I do believe in unconditional love,” Chastain wrote. “We are all part of this world, part of humanity and part of grace. No matter where you come from, you are perfect, and you are fully and unconditionally loved. And that’s what I hope people leave the theater knowing.”

The biopic also will depict a number of other evangelicals who were prominent during the 1980s, according to its IMDb page.

Vincent D’Onofrio, who starred in the TV show “Law and Order: Criminal Intent,” is set to appear in the film as Jerry Falwell Sr., who took over PTL after the Bakkers’ departure. The film also features Gabriel Olds as Pat Robertson and Jay Huguley as Jimmy Swaggart.

Jim and Tammy Faye Bakker were launched into stardom after creating PTL, a popular Christian news show and satellite network, in the 1970s. At the height of their fame, they also opened a Christian theme park called Heritage USA.

After Jim Bakker’s sex scandal, he was convicted of financial fraud and spent five years in federal prison. The couple divorced, and Jim Bakker, alongside his second wife, Lori Bakker, now hosts “The Jim Bakker Show.”

“The Eyes of Tammy Faye” is scheduled for release on Sept. 17.