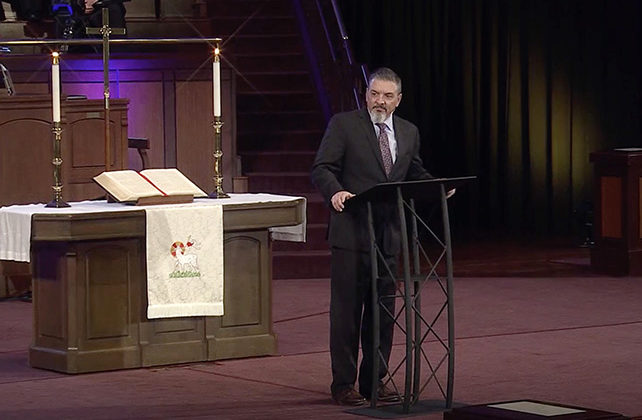 (RNS) The largest United Methodist church in the Atlanta metropolitan region announced it is leaving the denomination over the reassignment of its lead pastor.

Rather than leave the church, where he has served since 2016, Ray announced at a virtual press conference Monday morning (April 26) that he was surrendering his credentials as an ordained elder in the United Methodist Church.

“Unfortunately, my options were to accept the move, take a leave of absence or surrender my credentials,” he said. “That’s not consultation. It’s just notification, and it violates both the spirit and letter of the covenants that bind us together.”

Along with Ray’s announcement, Rustin Parsons, co-lay leader of the congregation, said that the congregation has decided it will not accept a new pastor and that its administrative council had unanimously approved a resolution directing church leadership of the church to proceed with the disaffiliation process.

“Given the recent actions of our bishop and the direction of the United Methodist denomination, both the leadership and members of Mt. Bethel strongly believe it is time for us to part ways with the denomination,” Parsons said.

“It is our hope that our disaffiliation will be amicable, orderly and timely. We long to go our separate way in peace so we can give our full attention to being the church God has called us to be in this community, the greater Atlanta area and our missions around the world.”

In the meantime, Mt. Bethel’s Staff Parish Relations Committee has hired Ray to be the church’s chief executive officer and lead preacher, according to the church.

Church leaders said Monday that Haupert-Johnson hadn’t given a reason for reassigning Ray, though the pastor said, “Many people know my heart for the important matter of racial reconciliation.” The pastor had not requested the change, which he called “unforeseen and disruptive,” and the congregation reportedly asked the bishop to allow him to remain.

Had the bishop engaged the pastor in conversation about shaping the position and given him time to pray about it, the outcome may have been different, Ray said.

“I will not engage in trying to read the bishop’s mind for why she has taken this hasty and ill-conceived action, but I do know she has undermined her credibility with the people of Mt. Bethel United Methodist Church and jeopardized both the health and vitality of this congregation that is a beacon of hope and light in this community and beyond,” he said.

In a pastoral letter published online Monday, Haupert-Johnson said the North Georgia Conference announces new appointments every spring. This spring alone, the conference has announced 70 new appointments, according to the bishop’s letter.

But when the district superintendent called Ray to discuss his new appointment, she said the pastor responded that he did not accept the position and hung up on the superintendent. Since then, the church has “cast this as a ‘hostile takeover’ by an evil, ungodly woman bishop and denigrating The United Methodist Church,” Haupert-Johnson wrote.

“This reckless behavior has caused a great deal of pain to the congregation and threatens its covenant with The United Methodist Church,” she added.

This isn’t the first time Mt. Bethel, a 175-year-old church with two campuses in the Atlanta area, has made headlines.

In 2016, Atlanta NPR station WABE reported the church’s former choir director, Ira Pittman, had filed a federal complaint saying he was forced to resign from the job because he is gay.

That year, the United Methodist Church’s global decision-making body, the General Conference, voted to hold a special session to decide matters of LGBTQ inclusion in the denomination — which has come up at every General Conference since the 1970s.

That special session approved what’s known as the Traditional Plan, which strengthened the denomination’s existing bans on the ordination and marriage of LGBTQ United Methodists.

In the pushback that followed, a group of 16 United Methodist bishops and advocacy group leaders from across theological divides negotiated a proposal to split the denomination, called “A Protocol of Reconciliation and Grace Through Separation.”

The proposal would commit $25 million over the next four years to form new, conservative “traditionalist” Methodist denominations. Churches and conferences would be able to vote to join those new denominations and take their properties with them.

Last month, the Wesleyan Covenant Association, a conservative group that had backed the Traditional Plan and organized to leave the denomination if it had not passed, unveiled its plans for one such traditionalist denomination: The Global Methodist Church.

But the 2020 General Conference — and any vote on the proposal to formally split the United Methodist Church — has been pushed back to August and September of 2022 because of the COVID-19 pandemic.

Parsons, the lay leader at Mt. Bethel, referred to the “long, contentious and destructive debate over theological and ethical matters” within the denomination during Monday’s press conference.

“It is widely known our denomination stands on the brink of a major division,” he said.

The church made clear in a FAQ on its website, however, that the root of its conflict with the bishop is not over differing stances on LGBTQ inclusion. Rather, it said, church leadership feels Haupert-Johnson did not properly consult with the church or its pastor before reassigning Ray.

Wesleyan Covenant Association President Keith Boyette, who helped negotiate the proposed protocol, described Mt. Bethel as “a very prominent church in our movement,” but said he had no insight into the church’s decision beyond what was said at the press conference.

The church hosted the association’s 2018 Global Gathering, and it likely would join the Global Methodist Church next year if the Protocol of Reconciliation and Grace Through Separation is approved by the General Conference, according to the Wesleyan Covenant Association website.

With the delay, United Methodists are anxious and want a decision, Boyette said. But the process and the cost to disaffiliate is “significant,” he added.

“The Wesleyan Covenant Association is not encouraging churches to disaffiliate except in unusual circumstances, like what has been presented for Mt. Bethel. There, we understand why a church will not continue to be part of a system that is taking actions that the church itself regards as being injurious,” Boyette said.