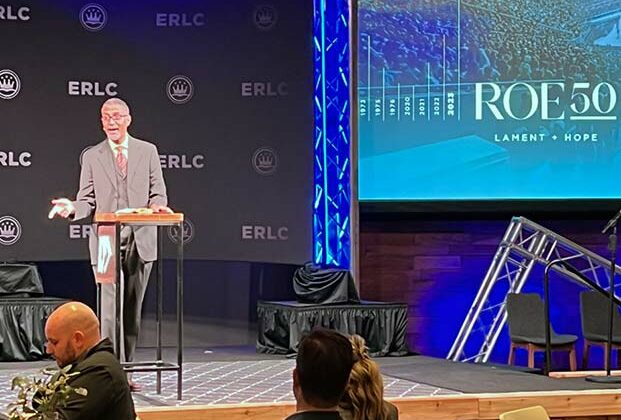 ALPHARETTA, Ga. (BP)—Church and pro-life ministry leaders were encouraged during a Southern Baptist-sponsored event Thursday night (March 3) not to become weary at this point in America’s nearly 50-year history of legal abortion.

The Ethics & Religious Liberty Commission (ERLC) held “Stand for Life: Road to Roe50” at the headquarters of the North American Mission Board. The ERLC brought together pastors, Southern Baptist Convention leaders, heads of pro-life organizations and others to consider how Christians can serve women and their unborn children, particularly if the 1973 Roe v. Wade decision that legalized abortion nationwide is overturned.

“[W]e especially can’t lose hope now – not now in the moment where abortion numbers have been reduced, where more people are affirming the dignity of preborn lives and not now as we stand at the precipice of what may be a new era for the legal environment of this nation,” ERLC Acting President Brent Leatherwood told the audience, according to his prepared remarks.

“No, if anything, now is the time to lean in and double down on our efforts.  . . .  [T]hat recommitment to this effort is what we are doing at the Ethics & Religious Liberty Commission,” he said. “This work is foundational for us.”

Abortion, Leatherwood said, “is an injustice. It must continue to be confronted with the truth that appeals to the consciences of those who might be tempted to look the other way. But it must be done so in a way that offers love, compassion, support and hope.”

Many pro-life and abortion-rights advocates believe the U.S. Supreme Court is likely to use a case this term out of Mississippi to reverse the Roe ruling and the 1992 Planned Parenthood v. Casey opinion. The Casey decision affirmed Roe but permitted some state regulation of abortion. The ERLC and multiple other pro-life organizations asked the high court to overrule Roe and Casey, a move that would return abortion policy to the states.

The Road to Roe50 is a collaborative, church-engagement effort in which the ERLC is playing a leading role. The initiative will include aged-based curriculum, a multi-stop tour in the fall of 2022, a Washington, D.C., event in January 2023 and a digital campaign to affirm the value of human life, as well as train and mobilize Christians to serve mothers, unborn children and families. The Roe50 page is available here.

“As we use this season to lament the lives that have been lost as a consequence of [Roe], our hope is that Southern Baptists and any Christian who cares about the dignity of the preborn would join us on the Road to Roe50,” said Elizabeth Graham, the ERLC’s vice president of operations and life initiatives, in written comments for Baptist Press Friday (March 4).

“We have several initiatives that we will be rolling out in the coming months to serve and equip the church,” she said. “The events are designed to help the church to thrive and minister in a post-Roe world.

“We believe the greatest hope we have for change is found in Christ,” Graham told BP. “Our calling as believers is to live out the Gospel by being the hands and feet of Jesus. Our desire is to see a day when vulnerable mothers are served, children in foster care find safe and loving forever families, children are adopted, and we see families flourishing. It is our joy to serve in this way, and we pray for the moment that abortion will become illegal, unthinkable and unnecessary in our day.”

“Jesus’ disciples enter cultural settings with a distinct perspective that is flavored by the Lordship of Christ,” said Smith, teaching pastor of the Family Church in the West Palm Beach area. “That’s not inconsequential. That’s not peripheral. That’s essential to the life of a follower of the Lord Jesus Christ.”

Smith based his remarks on Matthew 22:34-40, which includes what is known as the Great Commandment – first to love God “with all your heart, with all your soul, and with all your mind,” and second to love “your neighbor as yourself.”

Love of neighbor “is a significant part of our public witness,” he said. Christians “working to end the legal, political and cultural affirmations of abortion in our society” are “more than mere political strategists or cultural warriors,” he told the audience.

It is sinful “to maliciously, intentionally treat my neighbor in a way I would not like to be treated if I were in my neighbor’s situation,” Smith said.

Christians also “must maintain a biblical understanding of love, rejecting superficial, cultural understandings,” he said, adding the clearest way to demonstrate this is “loving mothers in crisis, babies in peril and fathers in confusion.”

A panel also discussed pro-life ministry currently and in a future in which Roe has been overturned. Panelists were Chelsea Sobolik, the ERLC’s director of public policy; Amy Ford, president of Embrace Grace; Jeff Bradford, president of Human Coalition; Jor-El Godsey, president of Heartbeat International; and Herbie Newell, president and executive director of Lifeline Children’s Services.

The ERLC’s other pro-life efforts include the Psalm 139 Project, its ministry to help provide ultrasound technology to pro-life pregnancy centers. The ERLC has placed or committed to place more than 30 ultrasound machines toward its goal of 50 placements by January 2023.