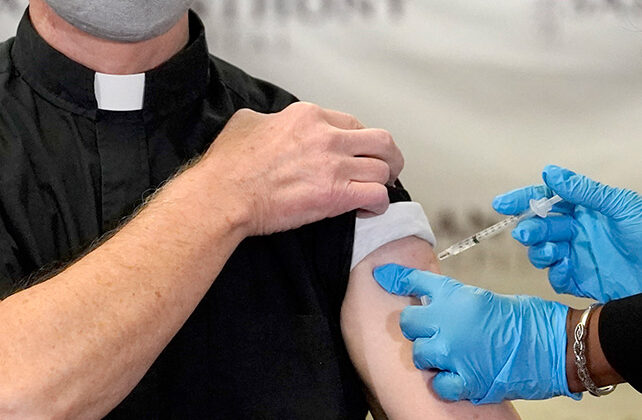 (RNS) For the Rev. James Baron, pastor of Holy Apostles Catholic Church in Colorado Springs, Colorado, it’s the responsibility of the church to advocate for the conscience of others.

That’s why Baron’s parish, on its website and its Facebook page, shared a link to a template made available for priests to sign “if a Catholic wants a written record that they are seeking (COVID-19 vaccine) exemption on religious grounds.”

The form, provided in English and Spanish by the Colorado Catholic Conference, the body representing the state’s Catholic bishops, declares that “vaccination is not morally obligatory in principle and so must be voluntary” and that “a person is morally required to obey his or her conscience.”

“If it is a matter of conscience, I think that society, employers, government has a strong obligation to respect that,” said Baron. “That’s the person’s innermost sanctuary, and we don’t want to violate somebody else’s conscience, let alone coerce them to try to do so.”

The Colorado Catholic Conference’s declaration has been held up as evidence of a rift among U.S. Catholic bishops over whether Catholic teaching supports declining the COVID-19 vaccine as employers and schools across the country begin to require it.

South Dakota bishops have concluded it does, saying in a statement that Catholics may “discern it to be right or wrong to receive one of the available Covid-19 vaccines.”

If Catholics come “to the sure conviction in conscience that they should not receive it, we believe this is a sincere religious belief, as they are bound before God to follow their conscience,” the South Dakota prelates said. “We support any Catholic who has come to this conviction … ”

“In the few calls and emails we have received from Catholics in Colorado, we have emphasized that no member of clergy is obligated to sign (or refuse to sign) the letter, and that individuals seeking details about the exemption process should consult with their employer or school,” Server said in the statement.

More and more bishops across the country, however, are urging their priests to refuse such requests.

In late July, the Archdiocese of New York sent a letter to its priests telling them that “there is no basis for a priest to issue a religious exemption to the vaccine,” and that doing so amounts to “acting in contradiction to the directives of the pope” and “participating in an act that could have serious consequences to others.”

The memo added that “any individual is free to exercise discretion on getting the vaccine based upon his or her own beliefs without seeking the inaccurate portrayal of church instructions.”

San Diego Bishop Robert McElroy, in an Aug. 11 letter, advised priests not to venture “down this pathway that merges personal choice with doctrinal authenticity.” McElroy’s directive came after several pastors wrote him saying they had received requests from parishioners to sign the form provided by the Colorado bishops.

The Archdiocese of Los Angeles recently issued a statement, saying it is “not providing individuals with religious exemption letters to avoid vaccination against COVID-19.”

Dioceses in Philadelphia,   Chicago and Honolulu have banned exemptions and ordered priests to deny such requests. Bishop John Stowe of the Diocese of Lexington, Kentucky, went further, declaring in a statement that diocesan staff will be required to be vaccinated “as a condition of their employment” beginning Sept. 1.

One LA County pastor, who disagreed with the Los Angeles archdiocese policy, said it was unfortunate that he couldn’t sign off on such requests because parishioners, including a teacher and an entertainment industry worker, had come to him seeking religious exemption endorsements over their COVID-19 vaccine concerns.

“Our hands are tied,” he said.

The Rev. Bernardo Lara, a Catholic priest in San Diego who advocates for the vaccine, said he hasn’t received any exemption requests from parishioners because “I think they know my perspective.”

Lara, however, said that when he is asked, he tries to get to the root of parishioners’ vaccine hesitancy, whether it’s due to mistrust of the government or for spiritual or political reasons.

“If it’s a spiritual fear, well, try to make them see that we all take care of ourselves throughout our life and that doesn’t mean that God doesn’t exist or (that) ‘I don’t trust God,’” Lara said. “An example I give them is when you’re going to cross the street, you look both ways before crossing the street. You still believe in God, but even then you look out for yourself.”

Lara doesn’t see this as a “you versus us” issue.

“I think it’s more of a, ‘Let’s walk together and help you see why we should be vaccinated,’ because at the very end that’s the core commandment of our Catholic faith. Love God and your neighbor as yourself,” Lara said.

“With the vaccine, it’s an act of faith in God. It’s an act of self love, but at the same time is an act of love toward one’s neighbor,” he added.

In Colorado, Baron stresses that bishops encourage people to get vaccinated. But, he added, the church also has a role to play in trying to help people protect their conscience. It would be “disingenuous” to say otherwise, Baron said.

Baron said most seeking his endorsement have done so in person, and with the hard copy of the form on hand. He said he doesn’t know if their employers have validated those forms. Baron said there hasn’t been an overwhelming amount of churchgoers asking him to sign off on those requests, adding that he won’t pry on why they’re seeking an exemption.

“I trust people to be able to have the integrity if they’re asking this. It’s not really on me to be an inquisitor. They’ve read the language of the letter. They know what they’re asking me to sign, and if I know them, then I have confidence in the maturity of their request,” Baron said.