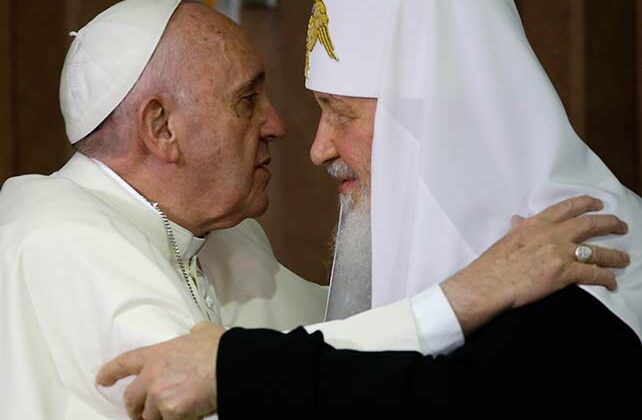 ROME (AP) — Pope Francis rejected the concept of a “just war” and stressed the need for peace in a video call Wednesday with the head of the Russian Orthodox Church in the first known communication between the two Christian leaders since the start of Moscow’s invasion of Ukraine.

The call was all the more remarkable because Francis and Kirill have only met once — at the Havana airport in 2016 — in what was then the first encounter between a pope and Russian patriarch in over 1,000 years.

A Vatican statement said both men agreed that the church “must not use the language of politics, but the language of Jesus” and stressed the importance of negotiations to reach a cease-fire.

“Those who pay the price for the war are the people, it is the Russian soldiers and the people who are bombed and die,” the Vatican quoted Francis as saying.

Wednesday’s call came just hours after Francis evoked the specter of a “final catastrophe” of an atomic war that would extinguish humanity. While Francis didn’t reference Ukraine explicitly in that part of his speech during his weekly audience, he did elsewhere call for prayers for Ukraine and for God to protect its children and forgive those who make war.

Francis’ long-term goal to improve relations with Kirill and avoid antagonizing the Russian Orthodox Church had explained his initially tepid responses to the Feb. 24 start of the Russian invasion. He has since stepped up his denunciations, demanding “an end to this massacre,” and labeling the invasion an “unacceptable armed aggression.”

But he has not condemned Russia by name for the onslaught or publicly urged Kirill to use his influence with Russian President Vladimir Putin to demand an end to the war, as other Catholic bishops and Orthodox leaders have done. The Vatican has a tradition of quiet, behind-the-scenes diplomacy and tends to not call out aggressors.

In fact, Francis’ comment about Russian soldiers paying the price for the war marked the first time he had publicly referenced Russia.

Kirill has said he appreciated the Holy See’s moderate tone.

Kirill, though, has sent signals justifying the war by describing i t as part of a struggle against sin and pressure from liberal foreigners to hold “gay parades” as the price of admission to their ranks. He has blamed the West and a fellow Orthodox patriarch for fomenting enmity between Ukraine and Russia.

According to the website of Kirill’s church, he and Francis — flanked by top officials of both churches — spoke about the situation in Ukraine, particularly the humanitarian aspects, and efforts by both churches to overcome the problems.

“The parties stressed the exceptional importance of the ongoing negotiation process, expressing their hope for the soonest achievement of a just peace,” the Russian church said.

The Vatican, in its readout of the conversation, did not reference a “just peace,” and in fact quoted Francis as saying the traditional Christian concept of a “just war” was no longer possible.

“Once upon a time there was also talk in our churches of a ‘holy war’ or ‘just war,’” the Vatican quoted Francis as saying. “Today we cannot speak like this. Christian awareness of the importance of peace has developed.”

“Wars are always unjust. Because those who pay are the people of God,” Francis told Kirill on Wednesday. “Our hearts cannot help but cry in front of the children, the women killed, all the victims of war. War is never the way. The Spirit who unites us asks us as shepherds to help the peoples who suffer from war.”

The phone call came hours before Francis’ deputy, Cardinal Pietro Parolin, celebrated a Mass for peace in Ukraine for ambassadors accredited to the Holy See. The Ukrainian and Russian ambassadors attended, and prayers were read out in Russian and Ukrainian, including by a woman wearing a blue and yellow ribbon on her lapel, the colors of the Ukrainian flag.

And on Friday, Francis is to celebrate a Mass during which he will consecrate Russia and Ukraine to the Virgin Mary in a ritual that holds deep significance for the Catholic faithful. According to tradition, one of the so-called secrets of Fatima concerns the consecration of Russia to “the Immaculate Heart of Mary,” prophesizing that peace will follow if the consecration is done.

St. John Paul II performed the consecration on March 25, 1984, though he didn’t specify Russia by name, and Francis will repeat the gesture 38 years later. On the same day, Francis’ chief alms-giver, Polish Cardinal Konrad Krajewski, who recently returned from a humanitarian mission to Ukraine, will celebrate a consecration Mass in Fatima, Portugal, the site of the early 20th century Marian apparitions that formed the basis of the “secrets of Fatima.”

Kirill’s ties to the Russian government and justification for the war have posed a diplomatic and ecumenical problem for the Vatican, which had offered itself up as a potential mediator. Francis visited the Russian ambassador soon after the initial invasion and spoke by phone with the Ukrainian president.

Kirill, for his part, has rebuffed calls for him to act as a mediator. In a March 10 letter to an official of the World Council of Churches — who had urged Kirill to mediate with Russian authorities to stop the war – Kirill faulted the West for the eastern expansion of NATO.

He also faulted Ecumenical Patriarch Bartholomew of Constantinople – considered first among equals of Eastern Orthodox prelates, though lacking the universal authority of a pope – for recognizing the independence of the Orthodox Church of Ukraine.