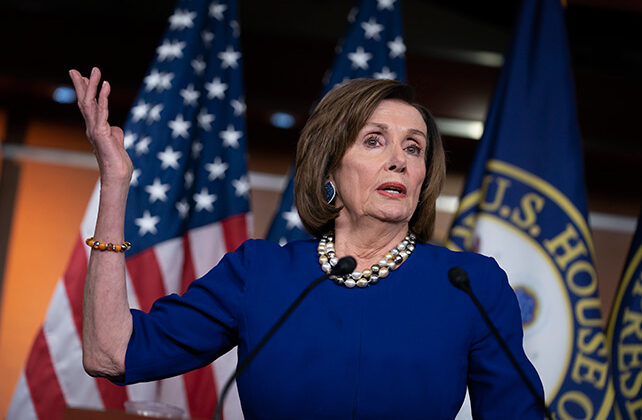 (RNS) Pope Francis welcomed U.S. House Speaker Nancy Pelosi to the Vatican on Saturday (Oct. 9), as she arrived in Rome for a gathering of legislative leaders of G20 countries ahead of the U.N. Climate Change Summit in Scotland later this month.

“It was a spiritual, personal and official honor to have an audience with His Holiness Pope Francis this morning,” the speaker said in a statement.

Francis’ private meeting with Pelosi, a Catholic and a defender of abortion rights, came as American Catholic bishops consider how to press the church’s teaching against abortion while the country’s second Catholic president, Joe Biden, heads an avowedly pro-choice Democratic administration.

But Francis has cautioned the American bishops — who have debated whether to deny Communion to pro-abortion Catholic politicians — not to move too quickly and has repeatedly signaled he does not want the Eucharist to become a political weapon. Flying home from his papal visit to central Europe on Sept. 15, he noted that he has never denied the Eucharist to anyone and that bishops risk becoming embroiled in “political problems” when they don’t act “like shepherds.”

The issue, which dominated the bishops’ national meeting in June, was spurred in part by criticism of pro-choice Catholic leaders by Archbishop Salvatore Cordileone of San Francisco, who has advocated denying Communion to pro-choice elected officials based in his archdiocese — which would include Pelosi.

On Sept. 29, after a bill aimed at overcoming a Texas law severely restricting abortion passed the House, Cordileone asked Catholics to pray for a “conversion of heart” for Pelosi and other Democratic representatives.

The speaker, in her statement on the meeting, emphasized the pontiff’s support for measures to combat climate change. “His Holiness’s encyclical Laudato Si’ is a powerful challenge to the global community to act decisively on the climate crisis with special attention to the most vulnerable communities.”

She went on to praise “the immense moral clarity and urgency that His Holiness continues to bring to the climate crisis.”

Francis had made known earlier this year his intention to participate in the upcoming COP26 conference, but the Vatican announced Friday without explanation that the 84-year-old pope, who is recovering from intestinal surgery, would not attend.

Pelosi also met with the Vatican’s Dicastery for Promoting Integral Human Development, a department created by Francis five years ago to oversee the church’s efforts on issues such as migrants, prisoners, the unemployed and other marginalized people, as well as victims of armed conflict, natural disasters, slavery and torture.

The meetings came as President Joe Biden announced his intention to nominate former lawmaker and anti-abortion Democrat Joseph Donnelly to serve as his Vatican ambassador.

It has been reported that President Biden will meet with Francis on Oct. 29.