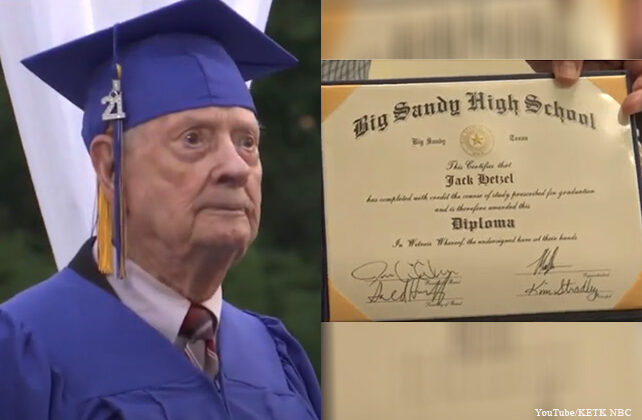 Dr. Jack Hetzel is the pastor of First United Methodist in Big Sandy, Texas. Hetzel is a World War II veteran, has written eight books, is the president and CEO of Hetzel & Hetzel Enterprises, and was a military science instructor at Texas A&M. But his many accomplishments didn’t include one thing that always nagged at him: the 99-year-old didn’t have a high school diploma. That changed this year when he joined Big Sandy High School’s graduation ceremony and walked across the stage to receive his high school diploma.

Dr. Hetzel says he was forced to drop out of school when he was in the third grade, and later received his GED in 1948. Since then he has dreamed about getting his diploma.

The school Dr. Hetzel attended growing up had no record of him attending, which made it hard for him to get his desired diploma. But that missing link never stopped him from learning. He says he sought out alternative ways to learn. Hetzel said he would look to the people around him as teachers. “If I got a question, I’d go to somebody who knew and asked them the question, and then I would use it in everyday life.”

The World War II and Korean War veteran fought in the Battle of the Bulge, Normandy, and in many other major battles while serving the United States. It was especially fitting that on this past Memorial Day, the Texas Senate recognized Hetzel by awarding him his high school diploma, and effort initiated by Sen. Bryan Hughes’ resolution.

“We’re proud of him,” said Sen. Hughes. “He’s someone that I represent, so I’m glad to brag about him and tell the story. It was fun for us.”

Big Sandy High School’s superintendent told KETK, “We’re really proud to be able to give something that means so much to him. It’s going to be one of the highlights of my school-year for sure.”