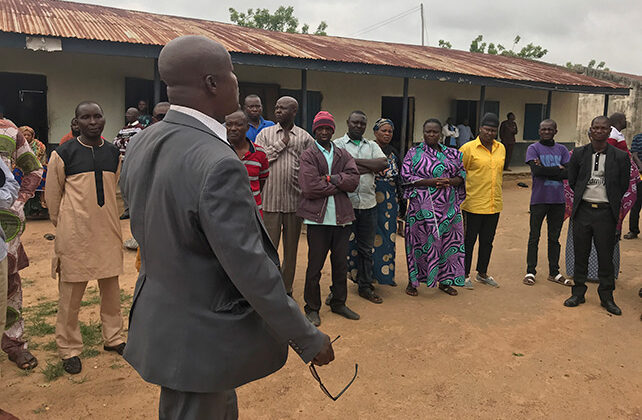 KANO, Nigeria (AP) Praying, crying and waiting for news about their children, the parents of more than 120 Nigerian students abducted by armed bandits at the Bethel Baptist High School in the nation’s northern Kaduna state have been gathering at the school awaiting updates about their children.

A group of gunmen stormed the school early Monday, at around 2 a.m., shooting sporadically as they kidnapped the students, according to the police.

The Rev. Ishaya Jangado, head of the Kaduna Baptist Conference that manages the school, led prayers Tuesday and said the kidnappers made contact with him. He was allowed to talk with some students who confirmed that they were fine and said that the number of pupils abducted was 121.

“We had a call from the bandits. They assured that our children are well,” Jangado said. “They (the students) counted themselves in the jungle and they gave us information that they are 121,” he added.

He added that 28 students escaped from the abduction, some hiding in the school and others running away during the assault on Monday. Jangado said that he met with members of the government who vowed to work to rescue the students and bring them back home.

Tragically such school abductions are becoming common in northern Nigeria, where nearly 1,000 students have been kidnapped from schools since December.

The U.N. Children’s Agency said the abductions on Monday are the “latest incident in an alarming spate of attacks against children and abductions, including of students, in parts of West and Central Africa.”

The organization estimates at least 950 students have been abducted by armed gunmen since December, with more than half of the abductions occurring in the past six weeks alone.

This is the fourth abduction of students in Kaduna state in the past six months. There have been seven mass kidnappings of students in Nigeria so far this year. The abductions are being carried out by armed groups who want ransoms.

The recent spate of kidnappings has become Nigeria’s worst-case scenario, he said, proving difficult to handle despite the efforts of security agents. He called on Nigeria’s leaders to rise to the challenge.

“I can’t imagine the way and manner these agents of banditry should be allowed to wreak havoc on innocent people for no just cause,” he said. “The government ought to take firm and ruthless action against the perpetrators of the despicable act.”

“Kidnapping is gaining credence in the country, because it has been considered by those blatantly committing the act as a legitimate business,” he said, adding that some have succeeded in getting ransoms without being apprehended.

Many schools have been forced to close as authorities are unable to adequately protect them.

The spate of mass abductions from schools in Nigeria has grown significantly since 2014 when members of the jihadi rebels Boko Haram abducted 276 female students from a government school in Chibok in northeastern Borno State.