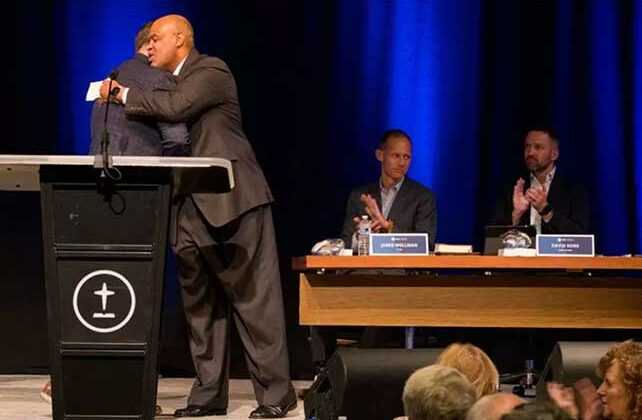 NASHVILLE (BP) – The State Convention of Baptists in Ohio (SCBO) donated $500,000 toward the Cooperative Program from proceeds of the recent sale of its Seneca Lake campground property.

During his presentation, Westbrook said motivation for the donation came from the impact the Cooperative Program made on his own life and ministry.

“In 2008 I left my hometown of Memphis, Tenn., to plant a church outside of Columbus, Ohio, and when I did, the Cooperative Program was there for me,” Westbrook said.

“In 2009, when I went to the Billy Graham School at Southern Seminary to earn my doctorate, the Cooperative Program was there for me. Then last year in 2021 when I returned back to Ohio to begin my new role as the executive director, I knew that it was now my turn to be there for the Cooperative Program. For Jesus said to whom much is given, much is required.”

Seneca Lake in a campground property in Senecaville, Ohio, that the SCBO had used for ministry purposes such as camps and retreats for church staff.

Westbrook explained that when he took over as executive director, he learned the convention was not doing well financially, and maintenance of the camp property was no longer sustainable.

The convention sold the property this past April to a private buyer for $2.1 million dollars, and choose to divide up the profit a number of ways.

Some of the money was put into the convention’s operating reserves (enough to cover a few months), some went to a church in the convention church that was paying for the renovation of a cabin on the camp property and some will go toward expenses to keep mineral rights (oil and natural gas) on the property.

Westbrook said the convention leadership wanted to use the remaining money to invest in the next generation, which was the purpose of the campground property to begin with.

Just before Westbrook came to the stage for the announcement, Willie McLaurin, interim president and CEO of the SBC EC, finished out his plenary speech by extoling the importance of state convention partnerships in CP giving.

“Our state conventions are our primary partners in Cooperative Program education and promotion, and God is working through state convention partnerships,” McLaurin said.

“I spent 15 years of my ministry encouraging cooperation among the churches of the Tennessee Baptist Convention, and I’m thrilled to report to you that we are on track to have the largest Cooperative Program Giving year since 2008.”

Westbrook closed out his comments by challenging churches to prioritize financial generosity.

“We’re not just better together, we’re stronger together and we must cooperate together.”