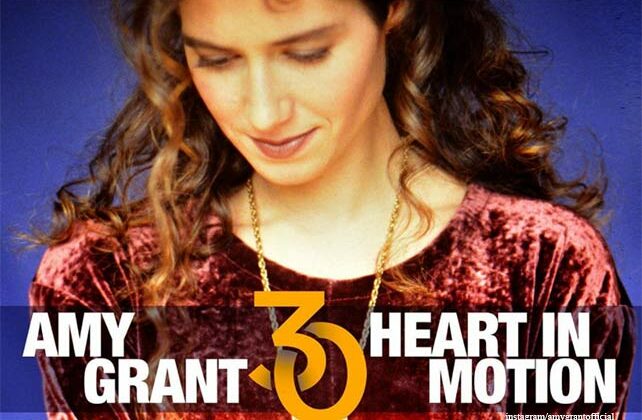 (RNS) Thirty years ago, Amy Grant was on top of the world.

After years of topping Christian music charts, Grant had caught the mainstream industry’s eye and began finding success on secular radio. In the 1980s, she had teamed up with Peter Cetera of the band Chicago for a No. 1 hit, “Next Time I Fall in Love,” winning several Grammys and performing on ” Late Show With David Letterman ” and ” The Tonight Show.”

Then in 1991, her album “Heart in Motion” went platinum, selling more than 5 million copies thanks to hits like “Baby, Baby,” “Every Heartbeat,” “Good For Me” and “That’s What Love Is For.” The success of “Heart in Motion” made her a household name and worldwide star — an experience that was both joyful and overwhelming.

“It’s like the jumping through the ring of fire,” Grant recalled in a recent interview, adding, with a perspective on fame gained from some 40 years of living inside it: “Pretty hot when you’re in the middle of it, but it doesn’t last that long.”

A newly remastered 30 anniversary “Heart in Motion” appeared this month, just in time for Grant, who had heart surgery last fall and calls herself fully recovered, to hit the road for a post-COVID, coast-to-coast tour, ending with a series of Christmas shows with her husband, the country music star Vince Gill, at Nashville’s Ryman Auditorium.

Grant was recently named to the Nashville Songwriters Hall of Fame, which she said was “beautiful and encouraging” and just the motivation she needed to start writing more songs.

When work began on rereleasing “Heart in Motion,” Grant hadn’t listened to the album for years. The songs, she discovered, don’t sound 30 years old, partly because their heavy reliance on synthesizers and studio techniques of the time have come back in style.

But listening to the songs brought back memories for Grant. When it came out she had young children at home and was still learning to balance the life of a pop star with being a mom. One of her four, her daughter Millie, who inspired the words to “Baby, Baby,” made a surprise appearance at the Grammys as a toddler in 1992. By the end of that heady decade, Grant had gone through a painful, public divorce.

“I was picturing all of my family at a much earlier version,” she said. “And those are always tender memories. You remember all good stuff, not the hard stuff.”

The best-known songs on “Heart in Motion” are filled with infectious joy, but the album also includes “Ask Me,” which Grant wrote after hearing the stories of friends who survived childhood sexual abuse.

When her band started that song in concert, most people would be sitting down. Then Grant would look out over the sea in the audience and see someone way in the back stand up. Then another person would stand. And another.

“That’s one of the gifts of music — it helps us find our voice and connects us,” she said. “The music seeps in the cracks and finds us.”

Recently Grant had dinner with friends, one of whom revealed their own history of surviving abuse. It was a reminder that people often carry heartache and sorrows that they keep hidden away.

After a long and successful career in Nashville, Grant has become a beloved figure in the country and Christian music capital, said Lee Camp, a Lipscomb University professor and host of the “Tokens Show,” which often features Gill as a performer.

One of the founding artists of contemporary Christian music, Grant is one of the few who has crossed over the mainstream-CCM divide. But in a town full of forceful personalities, Grant is as well known for her kindness.

“In the midst of all that success,” wrote Camp in an email, “Grant has maintained a constant presence of goodwill, great generosity and genuine kindness, while still being willing to speak her mind and do her stuff even when some of the religious powers-that-be have found it objectionable.”

Author and scholar Greg Thornbury, who has written about the origins of Christian music, said he first listened to Grant’s music as a disc jockey at a Christian station outside of Harrisburg, Pennsylvania. He said that for some fans, “Heart in Motion” was seen as a betrayal because there wasn’t enough “Jesus per minute” in the songs.

He said that her music brought to life the saying that “all truth is God’s truth” and showed that Christian musicians could write about life and human experience out of their sense of faith — and still be successful.

Grant gives credit to her band, her producers and others around her for making “Heart in Motion” the success it was — and for helping her manage the expectations that come with a huge hit.

“When for whatever reason lightning strikes and you become an important part of a lot of people’s financial bottom line, a whole lot is asked of you,” she said.

As she gets older, Grant said, it is easy to look back over her life with regret, wondering if she did things right. Recently, her prayers have gone something like, “Oh God, thank you for holding on to me.”

“Every day, we come to God with our five loaves and two fish in our worn-out, broken vessel and we receive and share,” she said. “I look at my journey of faith and think, there were times I felt smarter and more together. And now I mostly think about thankfulness and a whole lot of grace.”

The remastered “Heart in Motion” was released in early July in a two-disc set that includes unreleased tracks as well as remixes of the album’s hit singles. The record will also be available on vinyl for the first time since the 1990s.

The beginning of Grant’s career coincided with the emergence of evangelical Christianity as a social and cultural force. She heads out on tour at a time when churches and the culture are divided and polarized.

Asked if she had advice for her fellow Christians, Grant focused on the idea of respect.