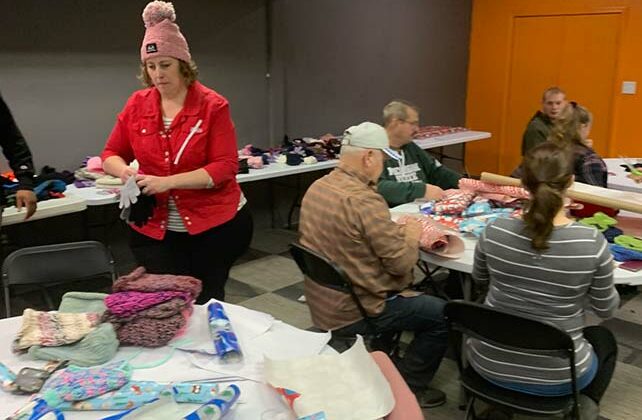 WYOMING, Mich. (BP) – As a middle school counselor, Libbie Drake feels she’s seen it all. And at the same time, knows she’s going to see more.

Stressed teachers. Unmotivated students. Increases in failure rates, truancy and behavior issues. While responding to questions for this article, a sixth-grader told her one of his friends was vaping in the bathroom.

It’s not just at the urban school where she works, either. “It’s being seen around the country,” she told Baptist Press. “My brother teaches in a rural school and they’re having major behavioral issues. We’re also fighting social media trends that are encouraging kids to steal things.”

The role of the educator has long been labeled a calling. And while America’s public schools have endured unsteady times before – unrest in the 1960s and integration efforts come to mind – it’s difficult to nail down a season when a potential Great Resignation of teachers looms as students continue to recover in numerous ways from a worldwide pandemic.

At least a year before COVID-19 became a household term, a teacher shortage was seen as real, large and growing. Those schools with the greatest needs typically get hit hardest all while politicians and other leaders demand high test scores and attendance rates. It’s a situation leading many to ask “How bad could it get?”

Whatever the challenge, CrossWinds Church in Wyoming, Mich. will be there to respond, said David Drake, pastor and Libbie’s husband.

“Anything the school needs, they know they can call us,” said David, who was also an assistant high school football coach for 12 years before resigning so he could serve as a board member for Godwin Heights Public Schools. He continues to coach, though, now as an unpaid volunteer.

Those calls from the school have led CrossWinds to provide lunches and classroom supplies for teachers and backpacks filled with clothes and jackets for students.

“For years we provided hats and mittens to every student at one of the local elementary schools,” he said. “This week, we’re helping with kindergarten registration and providing school supplies.”

As at CrossWinds, several members at Mount Pleasant Baptist Church in Colonial Heights, Va., work and volunteer in area schools.

It took a number of years after Joe Mayes joined MPBC as student pastor, but eventually a level of trust was built with the local high school. Then, Garrett Oppel came on board as children’s minister and focused on the elementary schools.

“I started Good News Clubs there and it helped bridge a great relationship with those principals,” Oppel said. “We also started giving the schools money each month to help pay for students who couldn’t afford lunch.”

Each Christmas, he added, the church asks for the names of a couple of families needing help with gifts. “[The principals] are always so grateful for how we can help those families.”

Mayes, who has since transitioned to missions and administrative pastor at the church, said church members in the schools provide a powerful testimony.

“One of the best feelings is when we take them breakfast or supplies and one of our church members say, ‘Oh it’s my Mount Pleasant people’ or ‘Let me introduce you to one of our pastors.’”

A resolution at the 1979 SBC Annual Meeting addressed what was then described as the “most serious crisis in history” of American education, citing issues such as communicating moral values, the breakdown of the family and racial desegregation. Later on, Southern Baptists affirmed the work of Christians in the public school system through resolutions in 1999 and 2006.

The mental and emotional – not to mention scholastic – consequences of the Covid shutdown are obvious to those in the schools.

“We have students who are behind not only academically, but socially and emotionally,” said Libbie Drake.

Many agree the end of the 2019-2020 school year was basically a wash, despite attempts to go all-digital. Depending on where you lived in the country, in-person classes either began that August or not until spring 2021. Distance learning could feel more like a hindrance than a bridge.

The Godwin Heights school system is in an urban setting and is predominately African American and Latino. As a board member, David Drake said the effects are placed before him repeatedly in conversations with educators.

“Our students were already educationally disadvantaged,” he pointed out. “Then Covid came. I’ve seen sorrow from teachers who are just exasperated and don’t know what to do. We have second graders coming in who are kindergarteners, emotionally. Everyone is exhausted.”

“We have several church members who serve as teachers, and I know they feel the kids have been behind in their education since Covid,” he said. “Second-grade teachers tell me they must start the year with kindergarten work because the kids are so far behind.”

All agree that stress has contributed to a teacher shortage. In addition to being a pastor and with the local school board, David Drake also serves on the county school board that has 27 districts.

“Teacher shortages are an issue at every one,” he testified.

No matter the stress or what the future holds, his wife is thankful for her role.

“I know that God has called me to be here, in all the insanity!” she said. “I absolutely love my middle schoolers and there’s no other place I would rather be than in their crazy lives.

“I feel like I make a difference and it would matter to the kids if I wasn’t here.”