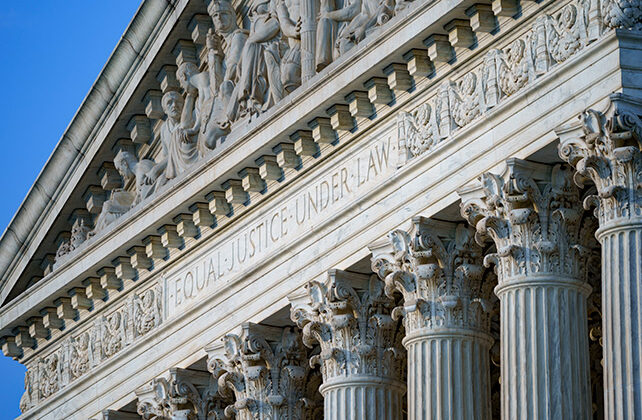 WASHINGTON (BP) — The Southern Baptist Ethics & Religious Liberty Commission has joined a diverse religious coalition in urging the U.S. Supreme Court to protect the right of the country’s oldest Jewish university to act according to its beliefs.

The ERLC and a collection of nine Baptist, evangelical, Catholic or Mormon institutions filed a friend-of-the-court brief Sept. 2 that asked the high court to block enforcement of a state court’s order that required Yeshiva University to recognize officially a gay and transgender student group. The New York City school had filed an emergency application with the justices requesting a stay of the lower-court order.

“This is a fast-moving case and one that Southern Baptists should be following closely,” said Brent Leatherwood, the ERLC’s acting president. “This religious university is being asked to violate an essential aspect of its mission by recognizing this LGBT club.

“That the New York court is even entertaining this question is a bridge too far,” he told Baptist Press in written comments. “The reality is, the courts have no jurisdiction here, and I am hopeful the emergency appeal to the U.S. Supreme Court and the amicus brief we have joined supporting that appeal will make that abundantly clear.

“Religious liberty — our first freedom — is, from a legal standpoint, incredibly strong right now. Failing to protect Yeshiva University in this case would be an ominous step backward.”

The coalition that signed onto the brief with the ERLC consisted of Houston Baptist University, Cedarville University, Liberty University, Biola University, Wheaton College, the U.S. Conference of Catholic Bishops, the Archdiocese of New York, The Church of Jesus Christ of Latter-day Saints and Brigham Young University.

Among others that filed friend-of-the-court briefs in support of Yeshiva were the Council for Christian Colleges and Universities, a coalition of Christian school associations, various Jewish organizations and three law professors.

The briefs demonstrate Yeshiva has “broad and monumental” support in the case, said Eric Baxter, vice president and senior counsel at Becket, a religious liberty organization that is representing the university. “It shows that this case does not just concern Yeshiva’s individual case but the right of all religious institutions to carry out their missions without interference from the civil court system.”

Yeshiva University, a 136-year-old institution with more than 7,400 undergraduate and graduate students on four New York City campuses, says education at the school is based on five Torah values – truth, life, infinite human worth, compassion and redemption. Torah refers to Jewish instruction, specifically that of the Pentateuch, the first five books of the Bible.

While Yeshiva says it welcomes, provides support to and seeks to protect lesbian, gay, bisexual, transgender and queer (LGBTQ) students, it refused to grant official recognition to the YU Pride Alliance in 2020. An Alumni and student group filed suit against the school.

The Supreme Court of New York County issued a permanent injunction June 14 against Yeshiva and ordered the school to grant the complete privileges to YU Pride Alliance that it offers to other student organizations. The court ruled Yeshiva is not a religious corporation under state law. On Aug. 23, the New York Supreme Court, Appellate Division, denied Yeshiva’s request that it block enforcement of the lower court’s order.

According to their brief, the ERLC and the other organizations differ in multiple ways but are united in this case “because their ability to serve and to structure their ministries as their beliefs require depends upon the protections of the First Amendment.” The lower-court decision and the appeals court’s refusal to stay the ruling constitute “a grave and pressing threat to religious liberty that warrants [the Supreme Court’s] immediate action,” they said in the brief.

RELATED: Are Some Evangelicals Taking John MacArthur’s Religious Liberty Comments out of Context?

The high court’s decisions regarding the First Amendment – which prohibits government establishment of religion and protects religious free exercise – “categorically [forbid] the government from second-guessing or interfering with Yeshiva University’s decision in any way,” according to the brief.

The First Amendment bars government intrusion into issues of religious belief or practice and was intended to halt the historic custom of state interference with faith-based organizations, the brief said.

By ignoring the Supreme Court’s “church autonomy doctrine,” as the brief described it, and “proceeding to second guess Yeshiva University’s understanding of its own religious beliefs, the trial court itself violated the First Amendment’s prohibition on government officials ‘act[ing] in a manner that passes judgment upon or presupposes the illegitimacy of religious beliefs and practices,’” the brief said in citing a previous opinion by the justices.

The trial court’s decisions that Yeshiva “had too many secular classes to be considered religious enough for protection” under the state’s civil rights law and that official recognition of an LGBTQ student group did not conflict with the university’s mission “are precisely the kinds of court determinations that the church autonomy doctrine exists to prevent from ever happening in the first place,” the brief said.