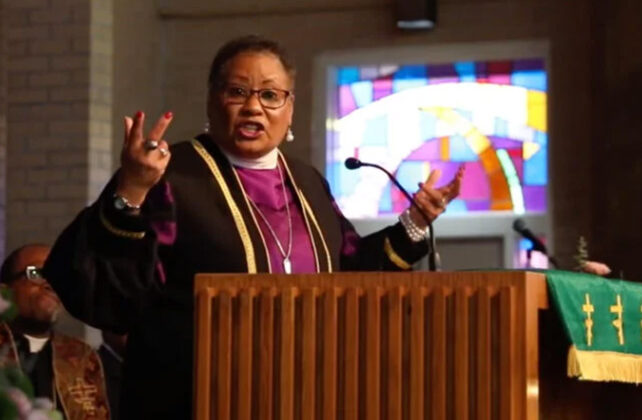 (RNS) The National Council of Churches has elected an all-female slate of officers for the first time in the ecumenical organization’s 71-year history.

Bishop Teresa Jefferson-Snorton, leader of the Fifth Episcopal District of the Christian Methodist Episcopal Church, on Wednesday (Oct. 13) became chair of the organization, starting a two-year term along with the other officers.

She is joined by the Rev. Elizabeth Eaton, presiding bishop of the Evangelical Lutheran Church in America, who is vice chair; Kimberly Gordon Brooks, first vice president of the 3rd District Lay Organization, African Methodist Episcopal Church, who is secretary; and the Rev. Teresa “Terri” Hord Owens, general minister and president, Christian Church (Disciples of Christ), who is treasurer.

All but Eaton are women of color.

“At this pivotal time in the life of the church in the United States, it is noteworthy that the NCC is modeling inclusiveness in selecting its leaders,” Jefferson-Snorton said in a statement. “The denominations that make up the NCC demonstrate a commitment to embody the diversity of God’s creation in so many ways. This commitment is a call for all of us to show the love of God to all, promote unity in Christ Jesus and to resist the current cultural trends of divisiveness.”

The governing board of the NCC also voted to approve the New Revised Standard Version Updated Edition Bible, or NRSVue, after a four-year effort to bring the widely used translation in line with the biblical scholarship since it was published more than 30 years ago.

The changes in the updated text were made “on the basis of accuracy, clarity, euphony, and current English usage,” the NCC said in an announcement about the project that has involved Friendship Press, its subsidiary.

In a statement, the Rev. Jim Winkler, NCC president and general secretary, called the new version, the work of dozens of scholars, editors and reviewers, “a monumental achievement.”

The new version is expected to be released by publishers on or after May 1, 2022. Friendship Press plans to make an e-Bible of the new version available on its Word@Hand app starting Nov. 19.

The 38 member denominations of the NCC comprise some 35 million Christians in Protestant, Orthodox, Anglican, evangelical and historic Black denominations and “peace churches.”

This article has been updated to clarify the nature of the changes in the New Revised Standard Version Updated Edition Bible.