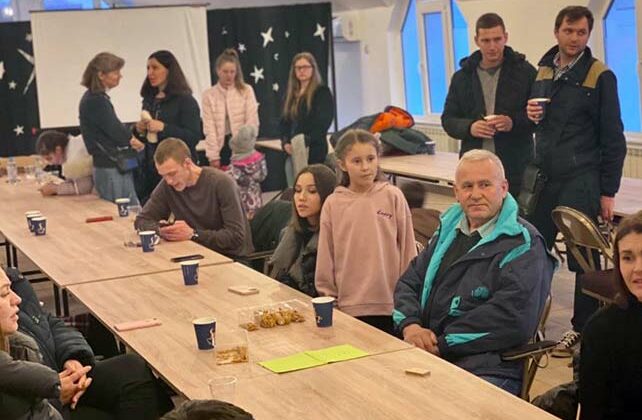 BUCHAREST, Romania (BP) – Baptist churches in Romania had been saving for months just to pay their heating bills. Then Russia invaded Ukraine.

For the more than 1,500 Baptist churches in Romania, the decision to sacrifice their resources for the safety of neighbors was automatic, Romanian Baptist pastor, educator and leader Daniel Fodorean told Baptist Press.

Fodorean is European strategist for Romanian-American Mission (RAM), a U.S.- based missions organization that has planted more than 400 churches in Europe, beginning first in Romania 28 years ago. In his RAM position, Fodorean helps coordinate humanitarian aid for Ukrainian refugees and undergirds pastors in their work.

“I see it was a miracle here,” Fodorean said. “God really helped us to manage.”

In addition, as academic dean of the Baptist Theological Institute in Bucharest, he has been able to house as many as 40 refugees at a time, helping them complete crucial paperwork and secure transportation to other countries.

Rob Jackson, director of church health for the Alabama State Board of Missions, is RAM president, leading the missions organization founded by his late father.

The war has energized churches in humanitarian and Christian outreach, pastors in Romania have told Jackson.

“It’s a beautiful partnership between Baptists, both Southern Baptists, Alabama Baptists, European Baptists, Romanian Baptist unions all coming together, and other denominations as well,” Jackson said. “When there’s war, we unite.”

An Alabama Baptist Disaster Relief team of six will travel to Romania in late April to help, the International Mission Board continues to help refugees in Poland, and several Southern Baptist churches have responded with prayer, financial aid and other support.

“Sharing the Gospel is not easy, having in mind the problem with translation,” Fodorean said. “The translation is the most difficult part.”

If English cannot be used, Romanian Baptists seek translators who speak Russian, Ukrainian and Romanian, but translators are rare. Romanians try to bridge the gap through the use of Gospel tracts, New Testaments and Bibles in Ukrainian, and are making plans for a Bible app in Ukrainian. A church in Bucharest has launched a worship service for Russian speakers to reach Ukrainians.

Of the more than 10 million displaced Ukrainians, 600,000 or so had fled to Romania and nearly 400,000 others had made it to Moldova by the end of March, the United Nations Higher Commissioner for Refugees reported. Another 13 million, UNHCR estimated, are stranded in affected areas of Ukraine and unable to leave because of security risks, destruction of bridges and roads, and lack of resources or information.

Romania’s government is providing aid to refugees, but Fodorean said the work is mostly done by churches and the private sector.

Getting financial aid to Ukrainians still in Ukraine is difficult. With wire transfers interrupted, pastors jeopardize their safety by literally taking money to internally displaced refugees who are then challenged to find needed goods to purchase.

Southern Baptists can help relief efforts by sending translators fluent in Russian and Ukrainian, by praying for Ukrainians and Russians, and sending financial aid.

“Churches can send small teams to come to Romania and Moldova,” Fodorean said. “Large teams will complicate the problem for Romania. … After the war is over, Americans can send church teams to rebuild towns and villages in Ukraine, if God will in His mercy allow us to go in Ukraine when the war is finished.”

The war is helping Romanians and Ukrainians put aside historical prejudices. Decades ago, Romania was larger in landmass. Portions of Romania were lost to present-day Ukraine in the days following World War II, when Ukraine was part of the USSR.

The historical tension was highlighted for Fodorean as he crossed a toll bridge when traveling to Bulgaria to visit a church Feb. 27.

“The man who was there for toll fee told me, ‘You see so many Ukrainians here, why we receive them, why we welcome them. Do you remember what they did to us?’ Which means even the people outside the church, they know about the situation with Romanians and Russians.”

But Fodorean considered it a rhetorical question.

“The Ukrainians are amazed at how Romanians treat them, and I receive a lot of testimonies … on internet, on Facebook,” Fodorean said. “Because their mentality was … Romanians (do) not love Ukrainians, and Romania, politically speaking, will try to take back the territory (taken) years ago.

“Now is the time to share love. It’s not the time to research the history,” Fodorean told Baptist Press. “We act in love, and this love is from God. We (do) not look to what was, we look (at) what is. We understand what is the need and respond.”

Jackson prays to see Romans 8:28 in action in the war.

“The ultimate thing,” he said, “is that God would use this for good. And for good I mean to end this war, but for good in that the Ukrainians would see that the war ceased not because of military might, but because of Jesus Christ. And that the eyes of the world would see that Jesus Christ is the only Prince of peace and that in seeing Him, there would be a worldwide revival and awakening.”