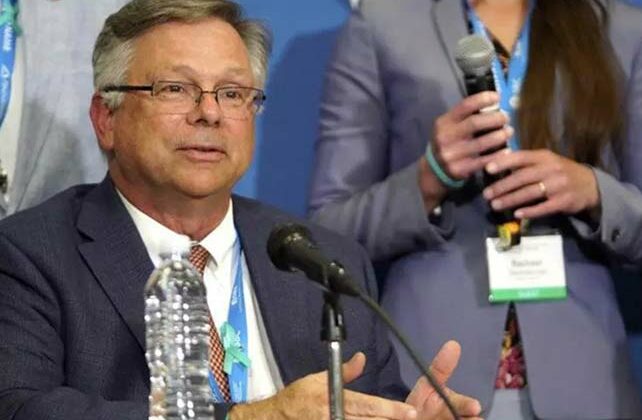 CHARLESTON, S.C. (BP) – Marshall Blalock, pastor of First Baptist Church, Charleston, S.C., said one of the spiritual lessons he learned through serving on the Sexual Abuse Task Force was how to “think and act with more compassion.”

Blalock was one of the eight members selected by immediate-past president Ed Litton to serve on the Task Force, and was also named vice chairman.

The Task Force began their work this fall by signing a contract with independent firm Guidepost Solutions, who conducted an investigation into allegations of mishandling of sexual abuse claims by the SBC Executive Committee.

Guidepost released their full report in May, and the Task Force later released recommendations for reform based upon the findings of the report. Those recommendations were subsequently overwhelming approved by messengers at the 2022 SBC Annual Meeting in Anaheim, Calif.

Blalock said the whole experience greatly impacted his understanding regarding ministering in situations of abuse.

“There are certainly some things from the past I would have done differently from the pastoral perspective regarding abuse,” Blalock said.

Blalock described a couple of previous situations at his church where instances of abuse happened at a school that met on their campus. The church immediately reported these instances to law enforcement, and the abusers were convicted and went to jail.

The regret for Blalock lies in the way he would have ministered to the survivors of abuse in these situations. He said this is a good lesson for all pastors to learn.

“Had I known what I know now we would have gone back and operated more effectively in caring for the sexual abuse victims,” Blalock said. “I think when it comes those who have been affected by sexual abuse, the first thing is to be able to see them and try to understand the kind of trauma they have experienced.

“I think that most, if not all, pastors have a heart to want to help and serve people … but if you want to lead and pastor well, it’s important to understand how sexual abuse has affected the people in your church. I, along with the other pastors on the Task Force, didn’t realize the depth of the trauma that’s involved with someone who is abused. It’s much more traumatic and life-altering than I ever understood or new.”

When initially approached by Litton about joining the Task Force, Blalock was willing to serve, but had no idea what he was getting into.

“I love the cooperative work that we do as Great Commission Baptists together, so that’s my baseline when I’m asked to do something,” Blalock said. When President Litton called me, I had no idea at the time what was really involved or the burden it would be.

“Had I known what I know now, I would never have volunteered for this. Yet, the Lord sustained us, and the Lord gave us direction. It was really a sense of love and appreciate for the churches of the Southern Baptist Convention that made me feel called to serve in this regard.”

Blalock said he is grateful for the passing of the Task Force’s recommendations during the annual meeting, and the great first step of reform in the Convention that it represents.

“I’m so grateful the Convention overwhelmingly adopted the recommendations,” Blalock said. “The unique factor of what has happened in the last year is that the messengers initiated this investigation with clear directions to the Task Force to bring recommendations on handling and preventing sexual abuse. That was a huge initiative that wasn’t forced on us, it actually came from us.

“We’re hoping for a cultural change where churches have no toleration for sexual abuse, and are taking all the steps to make sure we prevent it in our churches. We believe the local church in ultimately where this has to happen.”

Among the practical ways Blalock said churches should care for survivors in their church and community is to see them and try to understand what they are experiencing, provide access to trauma-informed counseling and take steps to try to prevent abuse from ever happening again.

Regarding caring well for survivors, Blalock said the main spiritual lesson he took away from his service with the Task Force was a deeper understanding of the compassion of Jesus Christ.

“One of the words in the Gospels that is most meaningful to be describing Jesus is when it says he had compassion on people,” Blalock said.

“There were times where people would have needs, and the Gospel writers stop and make note of the fact that he had compassion on those people. My experience on the Task Force has caused me to want to think and act with more compassion to the people around me that have suffered sexual abuse, and in some ways even the abusers as they certainly need help and they need God’s grace to shape their lives.”

The Task Force recently began meeting with new SBC President Bart Barber for times of questions and discussion as he prepares to name the upcoming Abuse Reform Implementation Task Force.

A love for the Convention is what continually carries Blalock on as the work continues.

“I love the SBC, and I want to see us be the people God has called us to be,” Blalock said. “I want to see our churches working together and cooperating to serve God’s purpose and do missions throughout the world. “We don’t think that we can stop sin, but we can sure do all we can as churches to have policies that can make it very difficult for sexual abuse to happen.”