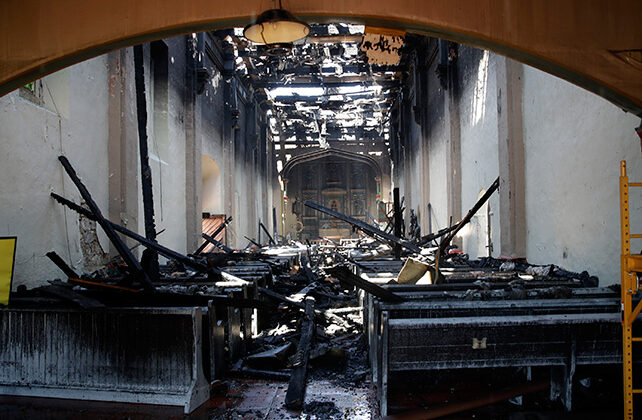 SAN GABRIEL, Calif. (AP) A man pleaded not guilty Thursday to setting a fire that caused millions of dollars in damage to a historic Southern California Roman Catholic mission.

John David Corey, 57, is charged with breaking in and setting a July 11 pre-dawn blaze that engulfed the rooftop and most of the interior of the San Gabriel Mission, east of Los Angeles, as it was undergoing renovations to mark its upcoming 250th anniversary celebration.

Nobody was hurt. Prosecutors said the flames caused millions of dollars in damage but firefighters managed save the altar and historic paintings.

Corey, who is described as homeless, entered pleas in Los Angeles to two counts of arson of an inhabited structure and one count each of arson during a state of emergency, first-degree residential burglary and possession of flammable material.

The church was the fourth in a string of Roman Catholic missions established across California by Junipero Serra — an 18th-century Franciscan priest who was canonized by Pope Francis in 2015 — during the era of Spanish colonization.

While many credit Serra with spreading Catholicism along the West Coast, he has long been a symbol of oppression among Indigenous activists.

Authorities haven’t released a motive for the arson, although Corey has a history of arson-related arrests in the San Gabriel area.

Corey was arrested two days after the fire on suspicion of trying to burn a San Gabriel business. He pleaded no contest and was sentenced that September to three years in jail, the San Gabriel Valley Tribune reported. Authorities say they later tied him to the church blaze.

Court records show he also was sentenced to three years in county jail for setting fire to a dilapidated structure at a construction site and got 50 days in jail for setting a fire in a restaurant in 2015, the paper said.

Corey’s criminal record also included convictions for drug use, theft and burglary and vandalizing a house of worship, according to the Tribune.